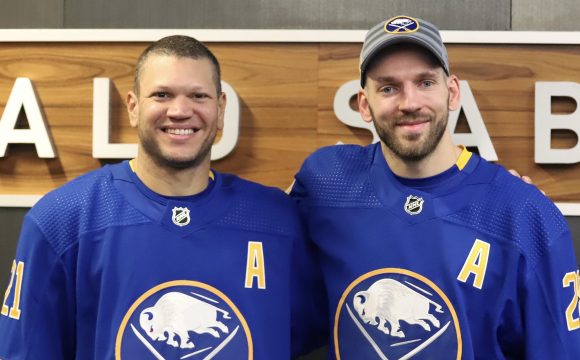 The Buffalo Sabres have their leaders for the 2021-22 season.

Kyle Okposo and Zemgus Girgensons will both wear the letter “A” on their jerseys, sharing alternate captaincy for the season. The news comes weeks after General Manager Kevyn Adams announced Jack Eichel had been stripped of his captaincy as his status in Buffalo remains up in the air.

“They’re veteran guys who have a passion and love for not only the Sabres, but for Buffalo,” head coach Don Granato said after practice. I’m excited to have those guys in the locker room, on the bench, and on the ice with us.”

“It’s an honor to be selected as one of the leaders and to be next to ‘Okie’ who’s been a leader throughout the years,” Girgensons said. “It means a lot to me.”

“It means a lot. It’s a tremendous honor.” Okposo added. “Girgensons is a guy that does everything right. It’s nice to see him get recognized like that.”