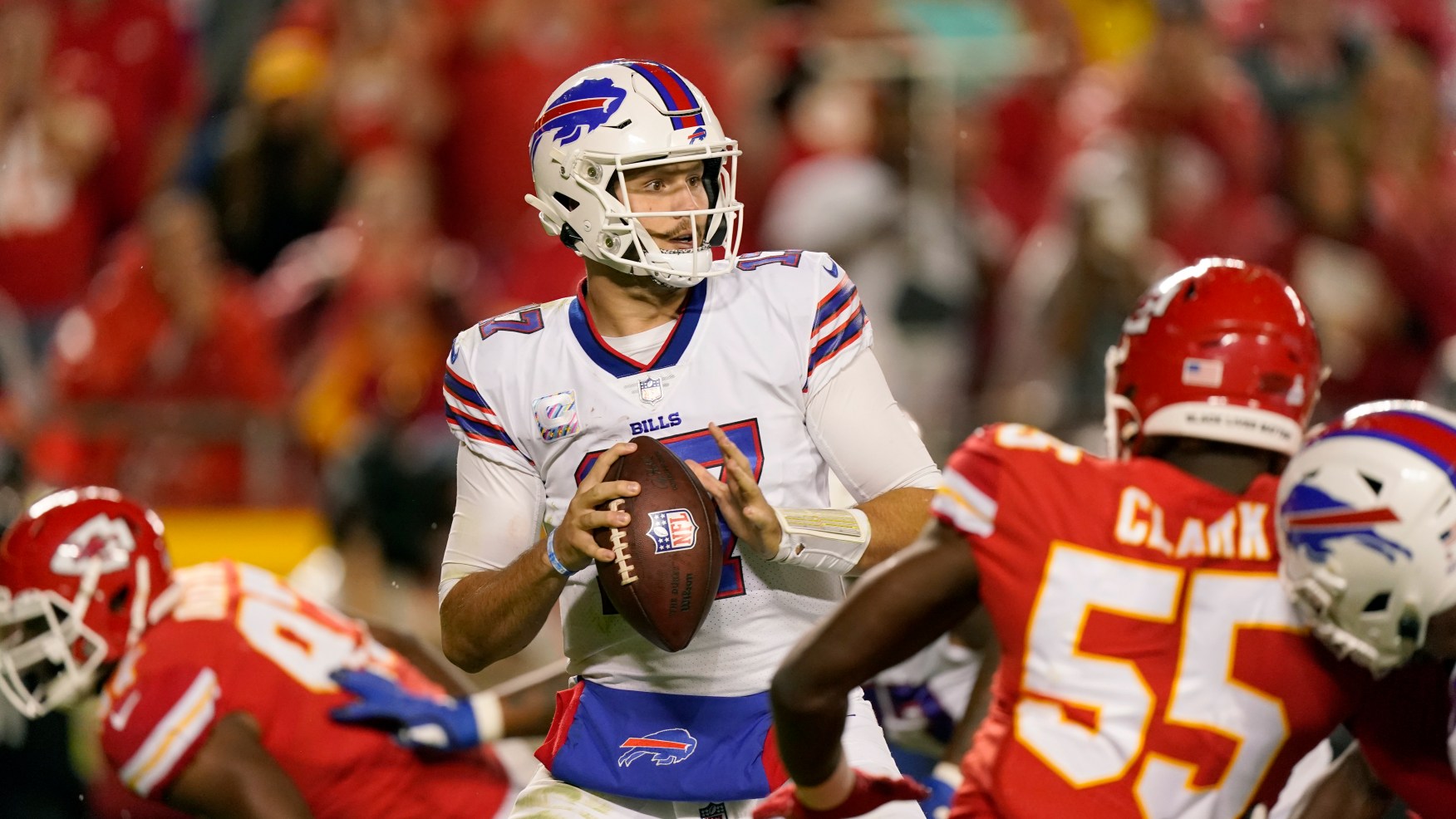 Not even a lightning delay could stop the Buffalo Bills from finally getting revenge on the Kansas City Chiefs in a rematch of the 2020 AFC Championship game on Sunday Night Football.

The Bills finish with a 38-20 victory over the Chiefs, and it was all Buffalo the entire time.

The Bills put together a stellar first half performance behind the million-dollar quarterback. In the first two quarters, Josh Allen was 7 for 14 with 219 yards and two touchdowns, and also led the ground game with four carries for 41 yards. Allen would add another touchdown and almost 100 more passing yards in the second half to finish the night 15 of 26 for 315 yards and three touchdowns.

Along with the offensive firepower in the first half, the Bills defense held the shifty Patrick Mahomes and Chiefs company to just 13 points after two quarters. Mahomes would connect with Travis Kelce for another touchdown early in the fourth quarter, but finished on the losing side of the ball. He finished 33 of 54 for 272 yards, two touchdowns and two interceptions.

Combine the first half defensive heroics with a Micah Hyde pick-six in the third quarter, the Bills defense slayed the metaphorical Chiefs dragon in Sunday’s matchup. The Kansas City ground game killed Buffalo in the two matchups in 2020, but on Sunday the Bills defense held KC to 120 yards rushing, 61 of those yards coming from Mahomes alone.

Aside from the season opening loss to the Pittsburgh Steelers, the Bills have cruised to four straight victories, scoring 35, 43, 40 and now 38 points while allowing a total of 41 points.

For a team that maybe hasn’t garnered the respect nationally that they deserve with the first three wins of the season coming against backup quarterbacks, Sunday night’s victory over the Chiefs was the win the Bills needed in order to silence the haters and prove that they are nobody’s little brother anymore and are a force to be reckoned with.

We made you this sandwich, #BillsMafia. Enjoy. 😋 pic.twitter.com/ykVnM9aOY9

FINAL: A statement win for the @BuffaloBills on Sunday Night. #BUFvsKC #BillsMafia pic.twitter.com/K9kAjN9dOy

We thought you might need this, #BillsMafia. 😘#BUFvsKC | #GoBills pic.twitter.com/bDZNnS1BcR

The Bills won’t say it’s a statement win but I will. They came into KC and dominated the Chiefs on both sides of the ball. The offense had explosive plays and the defense contained the most high powered offense in the NFL.

The #Bills have officially arrived. This is a watershed victory of the Sean McDermott, Brandon Beane era. A thumping of the team that thumped them twice last year. Super Bowl contenders, confirmed.

Josh Allen had a whole bunch of highlights, but my big takeaway from tonight is that this was a huge statement from the #Bills' defense. There were legit questions about the level of competition they had faced so far, and those were answered.

I tweeted it earlier in the week, but it's worth repeating — Emmanuel Sanders has been one heck of an addition. Just three catches tonight, but they've gone for 55 yards and a pair of touchdowns.

Lightning struck in KC. And so did @JoshAllenQB.#HaveADay | #BillsMafia pic.twitter.com/MDhX6EnZQ4

Big win!!! Back to work and btw @JoshAllenQB is a DAWG 💙♥️

this is the largest margin of defeat at home for KC in Mahomes starts. Previous hi was 7 pts. its 2nd largest loss overall with Mahomes. 2nd only to 22 pt loss in super bowl

Arrowhead is emptying out pretty quick for being the hardest place to play in the NFL.#BillsMafia

The Bills did exactly what the rest of the league has been trying to do to Josh Allen. 2-deep safeties, zone behind it, rushing four and getting home. Very few teams can can pull it off. The fact that the Bills are one of those teams….. is really huge

The Bills did not blitz Patrick Mahomes the entire game

If u talk 💩 u best be able to take it when u run into a dog who is all about that action boss! 🤡 #BillsByABillion

Bills are embarrassing Mahomes at home.

Micah Hyde gives credit to Mitchell Trubisky for giving them good looks posing as Mahomes on scout team. "He was running all over the place. Isaiah McKenzie helped us out too along with some other guys. They really helped us prepare. Shout out to them." #Bills

Sean McDermott: "It's week five and another step for us as a football team and as an organization. Humility goes a long way and you get humbled quickly in this league if you don't embrace that mindset."

Josh Allen walks us through the hurdle. pic.twitter.com/bMVpGsd8z0

Josh Allen: "I think this is gonna be made a bigger deal than it is. Last time I checked, four wins doesn't get you in the playoffs."

Emmanuel Sanders scored 2 touchdowns tonight and lost his voice after celebrating on the field after the win.

Tremaine Edmunds on Greg Rousseau: "That was a big time play, that was really big and I'm happy for him. He just keeps getting better…he's gonna continue to get better."

The Buffalo Bills are clicking on all cylinders heading into their Sunday Night Football clash with the Kansas City Chiefs in Week 5. Buffalo has responded to its season-opening loss with three straight wins by 20-plus points, including a 40-0 shellacking of the Houston Texans on Sunday.

Now the Bills enter this week with momentum on their side and revenge on their minds. The Chiefs crushed Buffalo’s Super Bowl dreams in last year’s AFC Championship Game, but KC doesn’t look like the same squad to start the 2021 campaign. This is the perfect opportunity for some payback.

Josh Allen on Patrick Mahomes: "You see him on the field, he makes unbelievable plays. One of the, if not the best QB in the league right now. So, got a lot of praise for him." pic.twitter.com/Ll959DHRBW