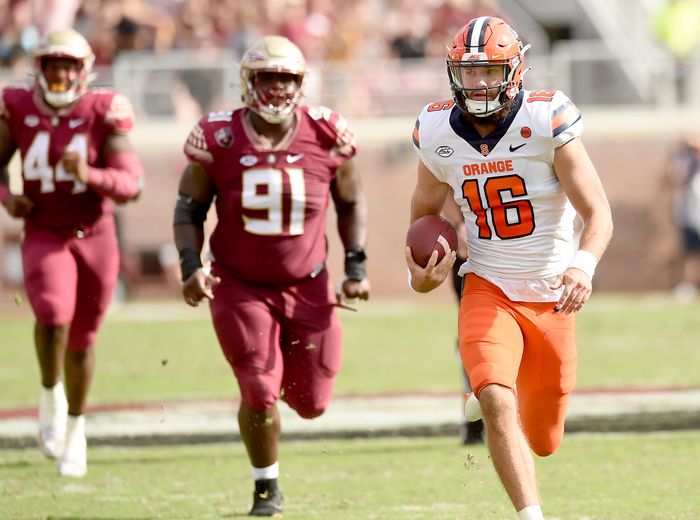 The Syracuse Orange football team battled throughout the afternoon vs. the Florida State Seminoles, but it just wasn’t enough. Syracuse lost by a score of 33-30 at Doak Campbell Stadium, and falls to 3-2 on the year.

Tough result on the road.

Back in the Dome next Saturday vs. Wake pic.twitter.com/sQDxkBMYfE

FSU wins and it officially is basketball season in Syracuse. (But really, it always is.)

That’s some blatant offensive pass interference. That’s not a “pick play”. That’s blocking downfield before and during a forward pass. pic.twitter.com/NzTA7wSiZ9

The Orange wrapped up its non-conference slate at 3-1, finishing the first third of the year with a winning record. Now comes the ACC slate, with the Orange set to open conference play on the road at Florida State on Saturday.

The Seminoles in Tallahassee will feature positional matchups with some of the league’s statistical leaders in numerous categories.

Both teams possess a strong running game. Syracuse freshman Sean Tucker ranks in the top 10 in the nation in seven different categories. He is second in the nation in rushing yards with 536, which is just 18 behind the national leader. On the other side of the field will be Florida State running back Jashaun Corbin. He ranks second in the country with 9.15 yards per carry and has three 100-yard rushing games in 2021.

Syracuse’s Cody Roscoe is this week’s ACC Defensive Lineman of the Week after posting his second-straight multi-sack game with two against Liberty. He now has 5.5 on the season, which ranks tied for second nationally behind Florida State’s Jermaine Johnson, who leads the nation with six.

Roscoe and the Orange defense rank 10th in the nation, allowing just over 261 yards per game. This week, the group will be tested by one of the most prolific passers in all of college football. McKenzie Milton transferred to Florida State from UCF, where he led the Knights to a 27-6 record as a starter from 2016-18 and finished in the top 10 for Heisman Trophy voting twice. In his career, Milton has passed for 9,231 yards and has 10,309 yards of total offense.

‘Cuse is looking for its first win at Doak Campbell Stadium, which would extend its winning streak to three. That would be its longest since winning four in a row twice during the 2018 campaign.

These three earned the right to be our captains for the ACC opener pic.twitter.com/nm3XF6SBVV

ACC play starts now. They all mean more from here on in. Let’s go! pic.twitter.com/2gFu1E4Mcc