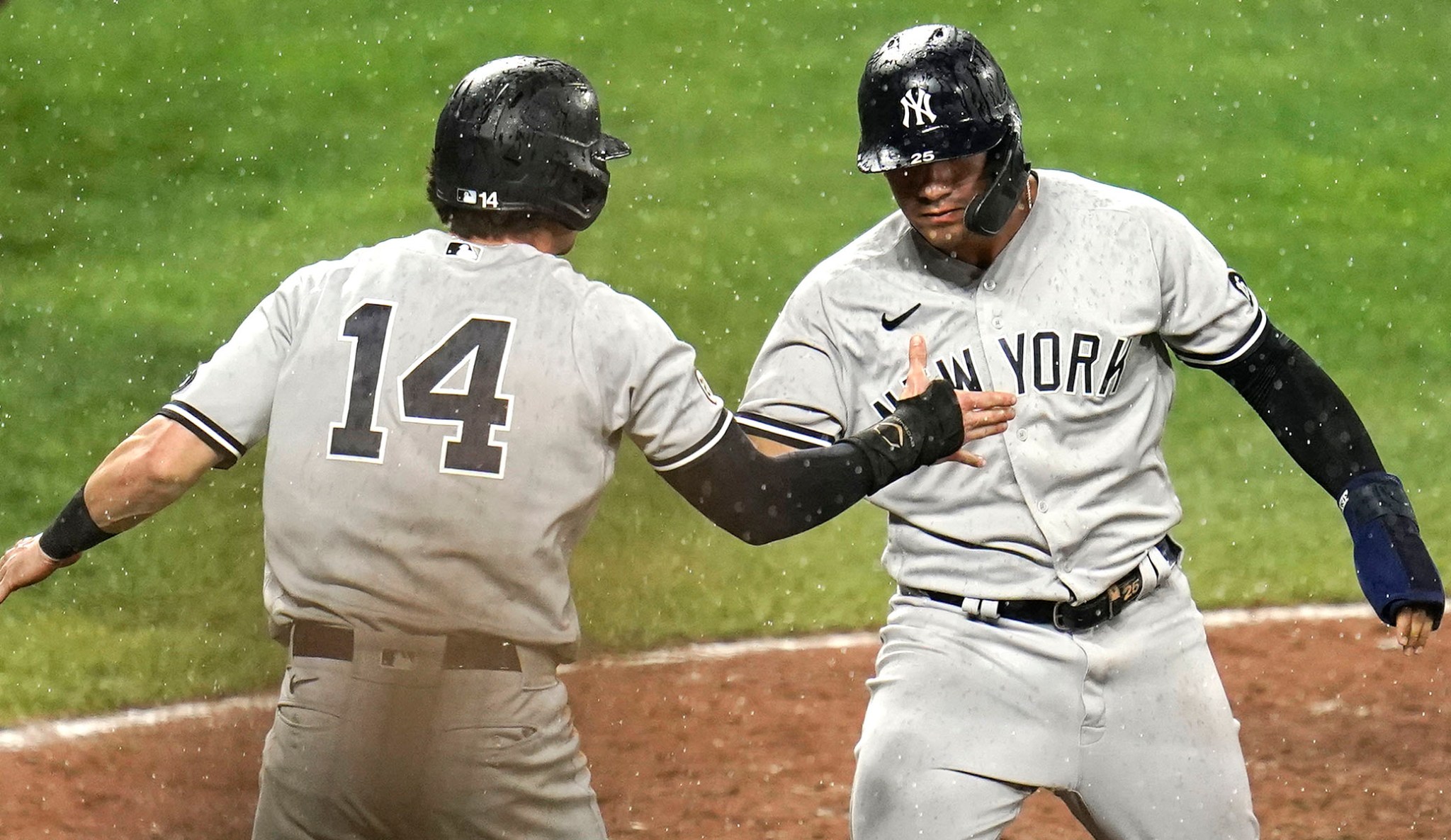 Wins are everything to the Yankees right now as they push toward October baseball.

With the Yanks’ impressive come-from-behind 4-3 win over the Orioles on Wednesday night at Camden Yards, they improved to 82-64. That helped them keep pace in the American League Wild Card race with the Blue Jays (82-64) and Red Sox (83-65), who also both won. The three AL East rivals are tied atop the AL Wild Card standings with only two berths up for grabs.

You couldn’t have written a better comeback for the Yanks in the top of the ninth inning. They were down by one run after right-hander Chad Green gave up a go-ahead two-run homer to Austin Hays a half-inning earlier. And New York was set to face Baltimore closer Tyler Wells.

Luke Voit opened the inning with a walk. He was then replaced by pinch-runner Tyler Wade, who immediately moved to second on a single by Gleyber Torres.

After Gary Sánchez flied out to left, Brett Gardner came up to the plate. At that point, Wade began to edge toward third, before making a break for his 15th stolen base of the season. With O’s catcher Austin Wynns throwing to third, Torres used the opportunity to swipe second, thus putting both in scoring position.

“That’s one of the most adrenaline-rush feelings you’ll get on a baseball field,” Wade said. “Especially when we’re down by one in the top of the ninth. You know, everyone’s trying to keep it close and everyone knows you’re trying to go.”

“I can’t stress enough how tough a matchup to steal right there was,” Boone said. “[Wells] is about as quick as you’re going to get, and a good-throwing catcher with a lefty. You’ve got to trust yourself and trust your nerve. It was just really, really special and set us up perfectly.”

After fouling off three consecutive pitches to keep the count at 1-2, Gardner came through with the big hit, delivering a two-run bloop single into left-center field for a 4-3 lead.

“Obviously, you don’t want to be in a situation where it’s the last inning and you’re down a run or two,” Gardner said. “You want to be up there with the game on the line. I feel like I’ve been having pretty good at-bats recently and seeing the ball well. [Wells] got ahead of me pretty quick and I was able to float that changeup he threw me out there into no man’s land. Thank goodness.”

The Yankees sent in closer Aroldis Chapman to protect the lead. The left-hander was pitching for the third consecutive day, but Boone knew early on that Chapman was available and ready to record a save.

Chapman needed only eight pitches (seven of which were strikes) for a 1-2-3 inning, notching a pair of strikeouts and sealing the Yankees’ third straight win.

“Really good team offense there in that final inning to grab it back,” Boone said.

Boone has stressed how crucial team wins are during this final stretch of the season, and that’s what this victory entailed. Starter Néstor Cortes Jr. fanned a career-high 11 batters while tossing 6 1/3 innings of one-run ball, Gio Urshela hit a two-run homer in the third and continued to settle in at shortstop and New York rallied when it needed to late.

“I think that our guys know what’s at stake here,” Gardner said. “Obviously, we’re not happy with necessarily the way our season [has] gone up to this point. Where we’re at in the standings, we still have a great opportunity ahead of us. It’s so important to just take things one game at a time right now. Really, one at-bat, one pitch at a time, and really try and slow the game down and execute. I thought we did a pretty good job of that tonight on both sides of the ball.”