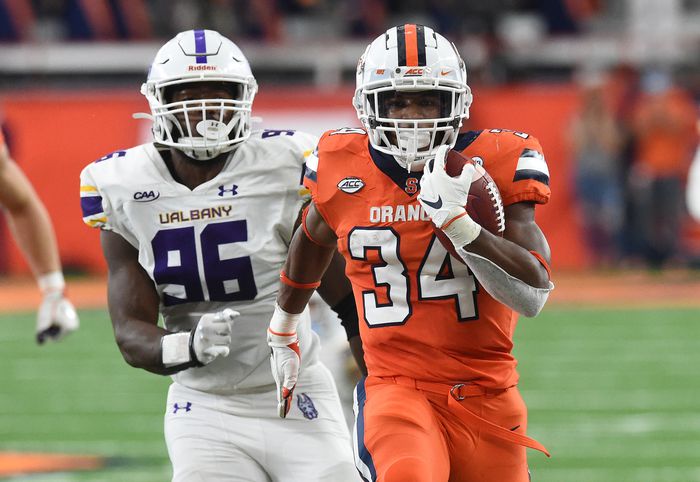 Syracuse freshman running back Sean Tucker ran for 132 yards and had 121 yards receiving with five total touchdowns as the Orange dominated FCS Albany 62-24 in the Carrier Dome on Saturday. With the win, Syracuse improves to 2-1 on the season, while Albany drops to 0-3.

Starting wide receiver Taj Harris did not play in the game due to an undisclosed injury. He did tweet before the start of the game that he would be back next week.

The Orange came into the game looking for an offensive explosion and got just that. Syracuse racked up 623 yards of total offense, ran for over 280 and threw for over 330 as it got its best game of the season on that side of the ball. Syracuse did turn it over twice, however, with both Tommy DeVito and Garrett Shrader throwing an interception.

Players with 100 yards receiving and 100 yards rushing in the same game in school history:

offense bounced back in a big way ? pic.twitter.com/M6038TfAJL

Syracuse takes on UAlbany for the first time in program history on Saturday at 12 p.m. in the Carrier Dome. The Orange are seeking their 12th-straight win vs. a New York state foe, a streak that dates back to 1986.

While head coach Dino Babers is looking to get his offense back into form against the Great Danes – it was the ‘Cuse defense shined in last Saturday’s contest against Rutgers. The unit allowed just 195 yards of total offense, marking the first time the Orange have held a power five opponent to less than 200 yards of total offense since 2014 against Wake Forest (170 yards).

Syracuse recorded 13 tackles for loss against Rutgers, which is one shy of the most for the team in the Dino Babers’ era. Dating back to last season, the Orange have recorded 10-or-more TFLs in three of their last five games.

“Any time where you lose two of the three facets of the game, it’s going to be difficult to win. I thought our defense played exceptionally well,” head coach Dino Babers said of last Saturday’s performance. “(They) gave us more opportunities than not.”

Linebacker Mikel Jones is this week’s ACC Linebacker of the Week after recording 11 stops against the Scarlet Knight, including 2.5 tackles for loss. Cody Roscoe made seven tackles, including 3.0 TFLs, which tie his career high. Stefon Thompson and Garrett Williams recorded eight tackles each.

Now the focus turns to maintaining that defensive effort, while putting more points on the board and shoring up the special teams units.

“I think Saturday reinforced a good lesson – which is that there are three facets to the game, and you need to make sure to win two our of the three to win the game,” Babers said.

Can't wait to get back in Our House tomorrow and work towards getting back in the win column.

Stay focused on what's in front of us. pic.twitter.com/Z3huG3oY6Y

Our captains for Week 3 in the Loud House pic.twitter.com/g4ZeoE14mH

Eyes on what’s ahead, not behind us. pic.twitter.com/ojTP03o72d