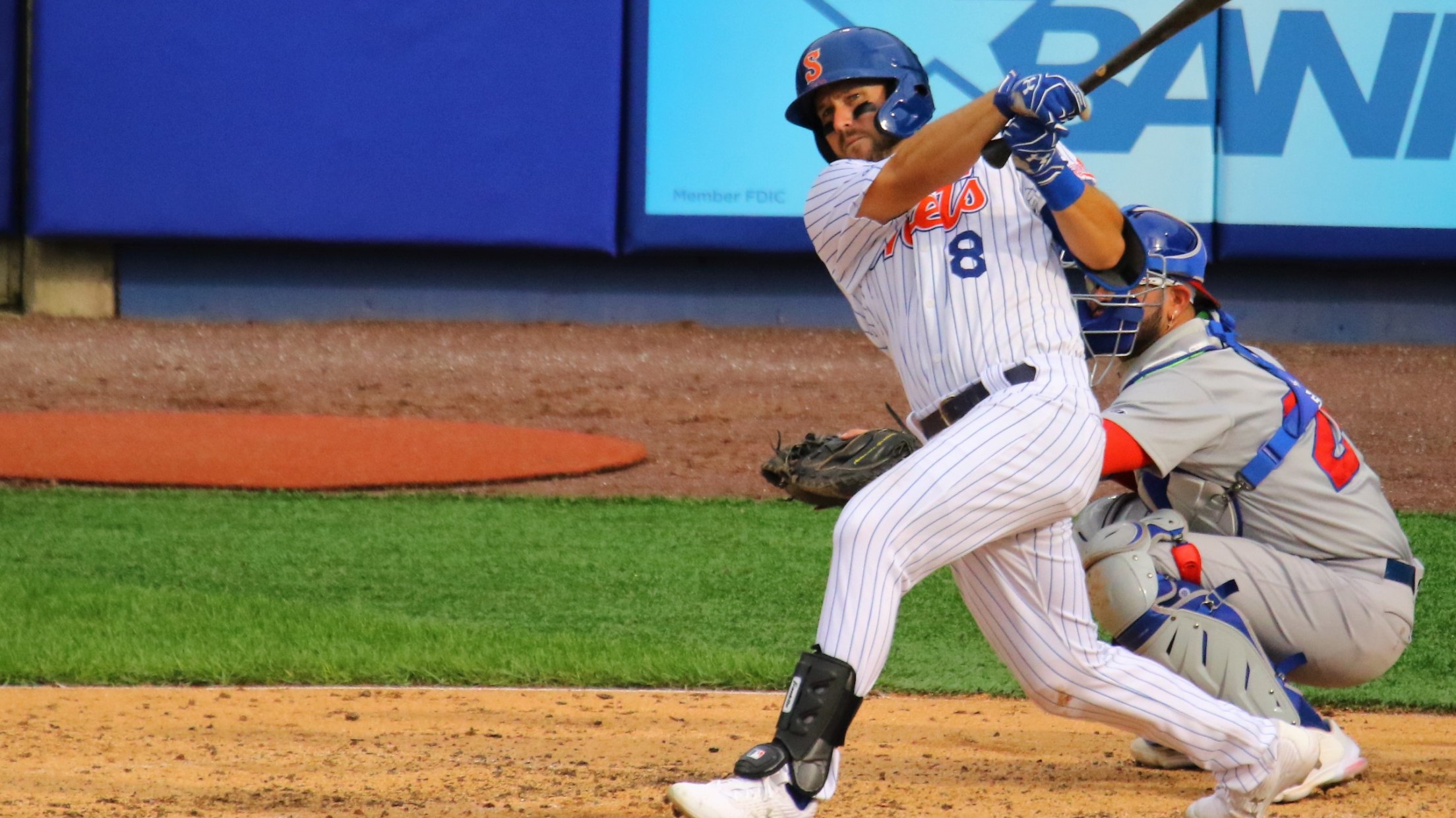 The Syracuse Mets extended their season-high winning streak to seven games with a doubleheader sweep of the Buffalo Bisons on Thursday at NBT Bank Stadium. The Mets won game one, 4-3, behind a solid start for Vance Worley, who delivered five innings, allowing two runs but just one earned, while walking only a batter and striking out one. In game two, Zach Godley delivered a dominant start with six innings of one-run ball, walking three and striking out four. Game two, was a 1-1 ballgame in the bottom of the sixth when Josh Reddick delivered a go-ahead RBI single to put the Mets in front en route to a 2-1 victory.

In game one, Syracuse (36-54) used a big bottom of the second to take the lead. David Thompson worked a leadoff walk, and Khalil Lee followed with a single. Then, Cheslor Cuthbert reached on an error by the shortstop Christian Colón to load the bases with no outs. That’s when Wagner Lagrange worked a walk to bring home Thompson for the game’s first run to put the Mets in front, 1-0. With the bases still loaded and no one out, David Rodriguez singled, scoring Lee to make it a 2-0 advantage for Syracuse. Cody Bohanek followed with a sacrifice fly to score Cuthbert and extend the lead to 3-0.

Buffalo (54-35) got on the board in the top of the fourth thanks to a Cullen Large solo homer off of Worley to make it 3-1 with the Mets still in front.

The Bisons cut the deficit to one in the top of the fifth, starting with a Cavan Biggio one-out single. Forrest Wall then came to the plate and singled into center field, but the throw in from Almora Jr. into second base got by second baseman Wilfredo Tovar, allowing Biggio to come all the way home and make it a one-run game, 3-2 Syracuse. It was ruled a single and then an error by Almora Jr.

The Mets added an insurance run in the bottom of the fifth. Bonahek and Almora Jr. led off with singles. Reddick then grounded into a fielder’s choice as Almora Jr. was retired at second and Bohanek moved to third. Tovar then provided an RBI sacrifice fly to hand Syracuse a two-run lead, 4-2.

Cullen Large struck again in the top of the sixth with his second straight solo home run making it a one-run game once again with the Mets still in front, 4-3.

With Syracuse still leading by a run, Tom Hackimer came out of the bullpen to pitch the seventh. The Queens native delivered a 1-2-3 inning, capping off the victory and earning the save after striking out Wall. In his six appearances with Syracuse, Hackimer has yet to allow a run or a hit.

In game two, Buffalo struck first with a run in the top of the first inning. Mallex Smith worked a one-out walk. After Biggio grounded into a fielder’s choice, Richard Ureña hit an RBI double to make it 1-0 Bisons. That was the only run allowed by Godley, who went on to deliver six innings.

The Mets got on the board in the bottom of the second. Thompson hit a leadoff single, and then Lee struck out looking. With Cuthbert at the plate, Thompson stole second base, and the throw by the catcher Kellin Deglan was airmailed into center field. The center fielder Wall then misplayed it, as the ball went under his glove, allowing Thompson to come all the way home to knot the game up, 1-1.

In the bottom of the sixth and the score still 1-1, Mason Williams hit a leadoff double. Tovar then flied out to right field, but Williams tagged up and advanced to third on the play. Reddick then delivered a go-ahead single to put the Mets ahead 2-1.

With Syracuse still leading by one in the top of the seventh, Bradley Roney came out of the bullpen looking for the save, and he delivered. The 28-year-old struck out the side in order for his fifth save of the season. In his last five outings, Roney hasn’t allowed a run or hit and has struck out seven batters.

The Mets will look to extend their winning streak to eight on Friday night when left-hander Josh Walker takes the mound against Buffalo left-hander Zach Logue. First pitch from NBT Bank Stadium is set for 6:35 p.m.