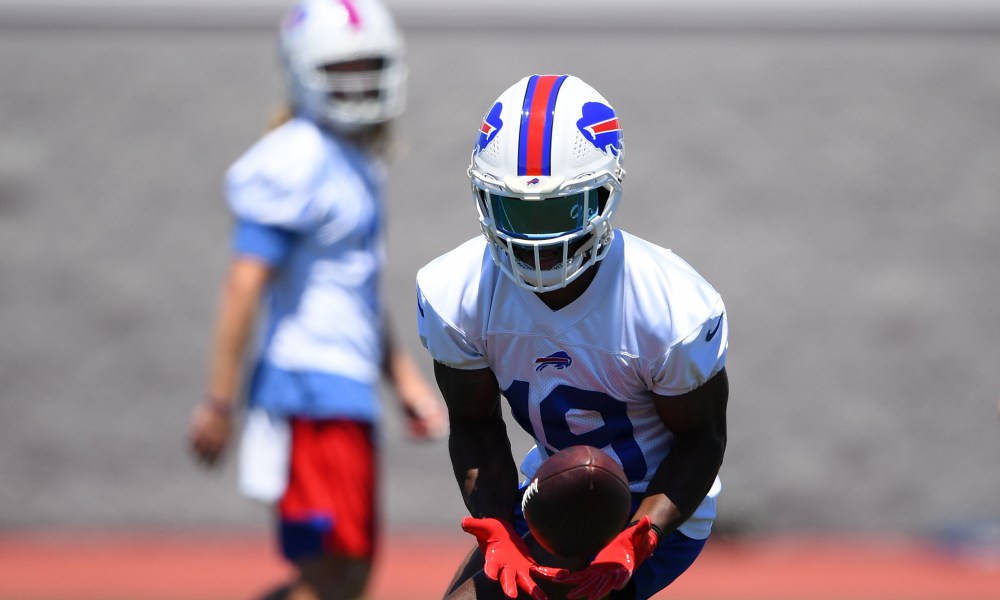 When Pro Bowl returner Andre Roberts signed with the Texans in free agency, it left a big hole on special teams for the Bills but they already had someone ready to replace him.

Roberts’ departure opened the door for Isaiah McKenzie to take over that job.

“He’s in that number one spot right now, he had a great return last season. We’ve seen him in the past doing it and there’s nothing that shows anything different now,” Bills special teams coordinator Heath Farwell said before practice on Thursday.

“He’s a guy that I have to drag off the field every day after practice with jugs. He works his butt off, he cares, his mindset is there. He’s in the driver’s seat.”

One of the first things that jumps out about McKenzie is his speed which is especially important for this role.

“A lot of pride, it’s not self proclaimed but I am the fastest guy on the team, a lot of people say I’m not but I think I am,” McKenzie laughed.

“But I take a lot of pride in it, each and every day I try to get faster, I try to keep up with my speed.”

McKenzie spent two seasons behind Roberts while he was with the Bills and made the most of that time, picking his brain when it comes to the return game.

“Situations, certain situations of the game, how to control field position, just knowing when to fair catch, when to take a chance, just don’t be too greedy, you know do your job and make sure we have the ball at the end of the day. He taught me a lot about that. It’s small but it’s big because the ball’s important,” McKenzie explained.

During his college career at Georgia, McKenzie was used in the return game and he even admitted back then he made some “risky plays” in college but now knows when to do certain things and when not to as his confidence as grown in the NFL not just as a returner but in the passing game as well.

“Now going into year five I feel like I’m pretty confident in my route running, my return ability. I just want to get better each and every day. Now that I’m alone, Dre’s not here I just gotta take full control and be consistent each and every day,” McKenzie said.

Of course when it comes to the Bills passing game and this wide receiver room, it’s loaded with talent. When you have guys like Stefon Diggs, Cole Beasley, Emmanuel Sanders and Gabriel Davis, there isn’t much room for anyone else to get a piece of the pie.

But McKenzie just smiled when asked about his relationship with offensive coordinator Brian Daboll.

Obviously with the guys mentioned, McKenzie is low on the totem pole to have the ball thrown his way and he acknowledges that, but it doesn’t discourage him. If anything it fuels him.

“I just have to take advantage of the opportunities he’s [Brian Daboll] given me and I’ve done good so far. I feel like he believes in me, I believe in him, I feel like he’s gonna put me in the best situation possible, you know try to get the ball in my hands when he can,” McKenzie said.

Last year’s regular season finale against the Dolphins was a big moment for McKenzie as he hauled in two touchdown passes from Josh Allen and took a punt 84 yards to the house. At the time, Matt Haack was the Dolphins’ punter. Now he’s with the Bills and McKenzie doesn’t let him forget that play.

New #Bills punter Matt Haack was with the Dolphins last year when @_IsaiahMcKenzie took one of his punts 84 yards to the house. And today McKenzie had the line of the day when asked if Haack said anything to him about it.

"I call him my son." ? pic.twitter.com/uVtn9qIfyM

Farwell did mention there is good competition for the returner position with Brandon Powell and rookie Marquez Stevenson. But it’s McKenzie’s job to lose and it doesn’t look like he’s losing it any time soon.