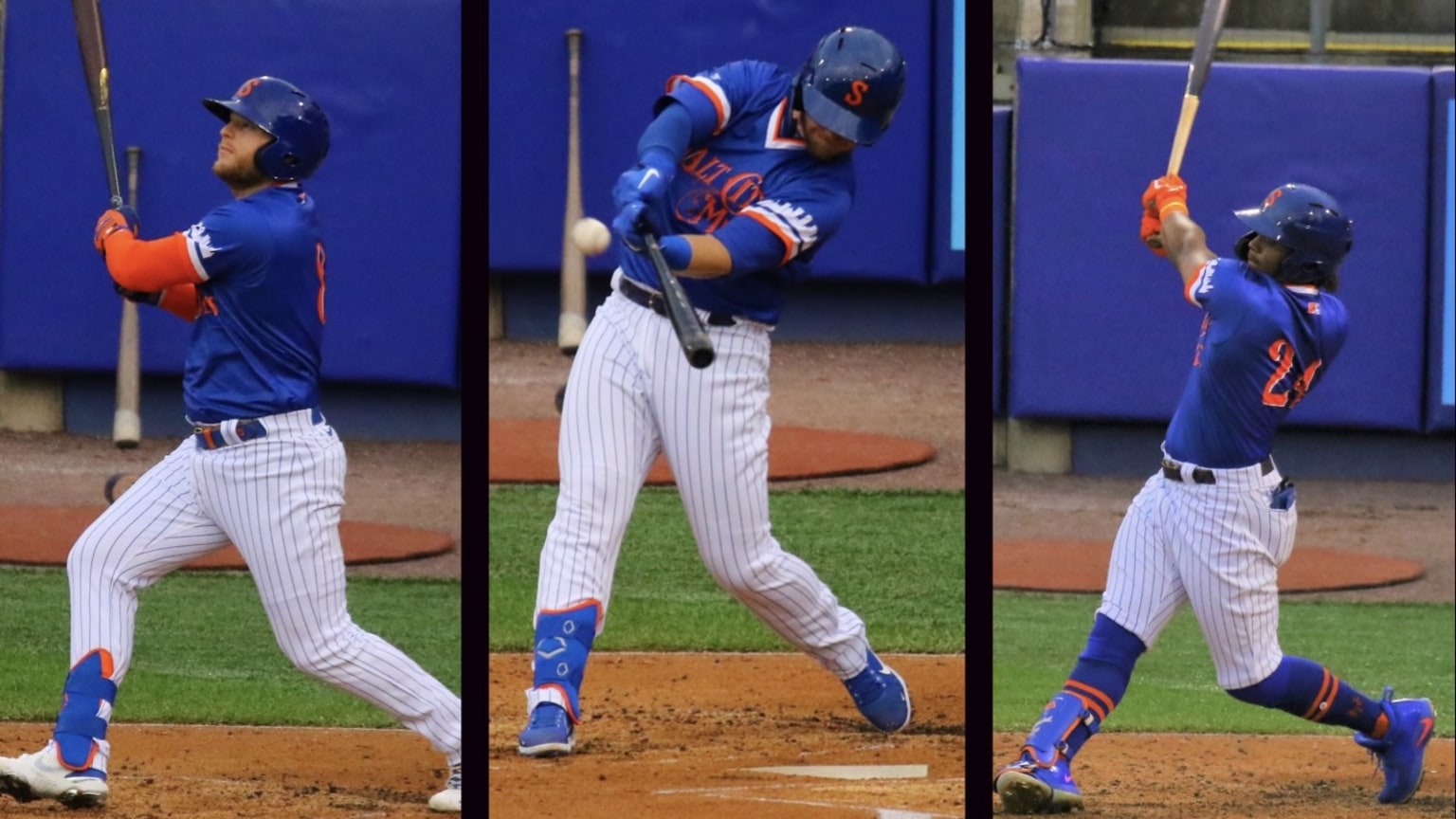 TRAVIS BLANKENHORN, CHANCE SISCO, AND KHALIL LEE ALL HIT HOME RUNS IN THE BOTTOM OF THE FIRST INNING ON SATURDAY NIGHT. (HERM CARD)

The Syracuse Mets became the Salt City Mets on Saturday night and beat the Scranton/Wilkes-Barre RailRiders, 5-3, in front of 7,162 fans at NBT Bank Stadium, the second largest crowd of the season. After being traded from the Chicago Cubs on Friday, starting pitcher Trevor Williams impressed in his Mets debut. After allowing a two-run homer to Andrew Velazquez in the first inning, the right-hander dealt five straight scoreless innings. Williams’ final line featured six innings pitched, allowing two runs, four hits, one walk, while striking out six batters. Meanwhile, the Mets offense hit three homers in a four batter stretch in the bottom of the first inning.

Scranton Wilkes-Barre (47-26) struck first with a pair of runs in the top of the first inning. Kyle Holder hit a one-out infield single off the glove of Williams. Velazquez followed with a two-run homer to give the RailRiders an early 2-0 advantage.

Salt City (26-50) responded in a powerful way in the bottom of the first, and the Mets did it all with two outs. Travis Blankenhorn hit a solo home run off RailRiders pitcher Deivi Garcia to cut the deficit to one, 2-1. Patrick Mazeika followed with a single, and then Chance Sisco blasted a two-run homer onto the Salt City Deck in right field to give the Mets a 3-2 lead. Khalil Lee made it back-to-back homers with a solo shot to cap off a four-run first inning for Salt City that featured three home runs.

After a couple scoreless innings from Scranton Wilkes-Barre reliever Nick Green, the Mets got back on the board in the bottom of the sixth inning. Drew Jackson led off with a single, and Mark Payton followed with a single of his own. Next, Albert Almora Jr. hit a one-run double scoring Jackson to make it a three-run lead, 5-2.

Scranton Wilkes-Barre quickly trimmed the deficit in the seventh. Max McDowell hit a leadoff double and was moved to third on a Frederick Cuevas sacrifice bunt. With one-out, Cristian Perez came to the plate and hit into an RBI groundout that brought home McDowell to make it a 5-3 game with Salt City still in front.

With the Mets still leading by two runs in the top of the ninth, Bradley Roney came out of the bullpen and delivered a perfect inning to earn the save as the Mets have won three of the first five games in their six-game series against the RailRiders.

The Mets and RailRiders return to NBT Bank Stadium for the series finale on Sunday. The Syracuse Mets will induct the Syracuse Baseball Wall of Fame Class of 2021: Jason Grilli, Bob Southworth, Jack Morse, and Danny Cavallo. The day will include a pregame ceremony for the Wall of Fame Class and a Jason “Grilled Cheese” Grilli Baldwinsville high school bobblehead giveaway for the first 1,000 fans. The ceremony will be held at 12:45 p.m. with first pitch to follow at 1:35 p.m.