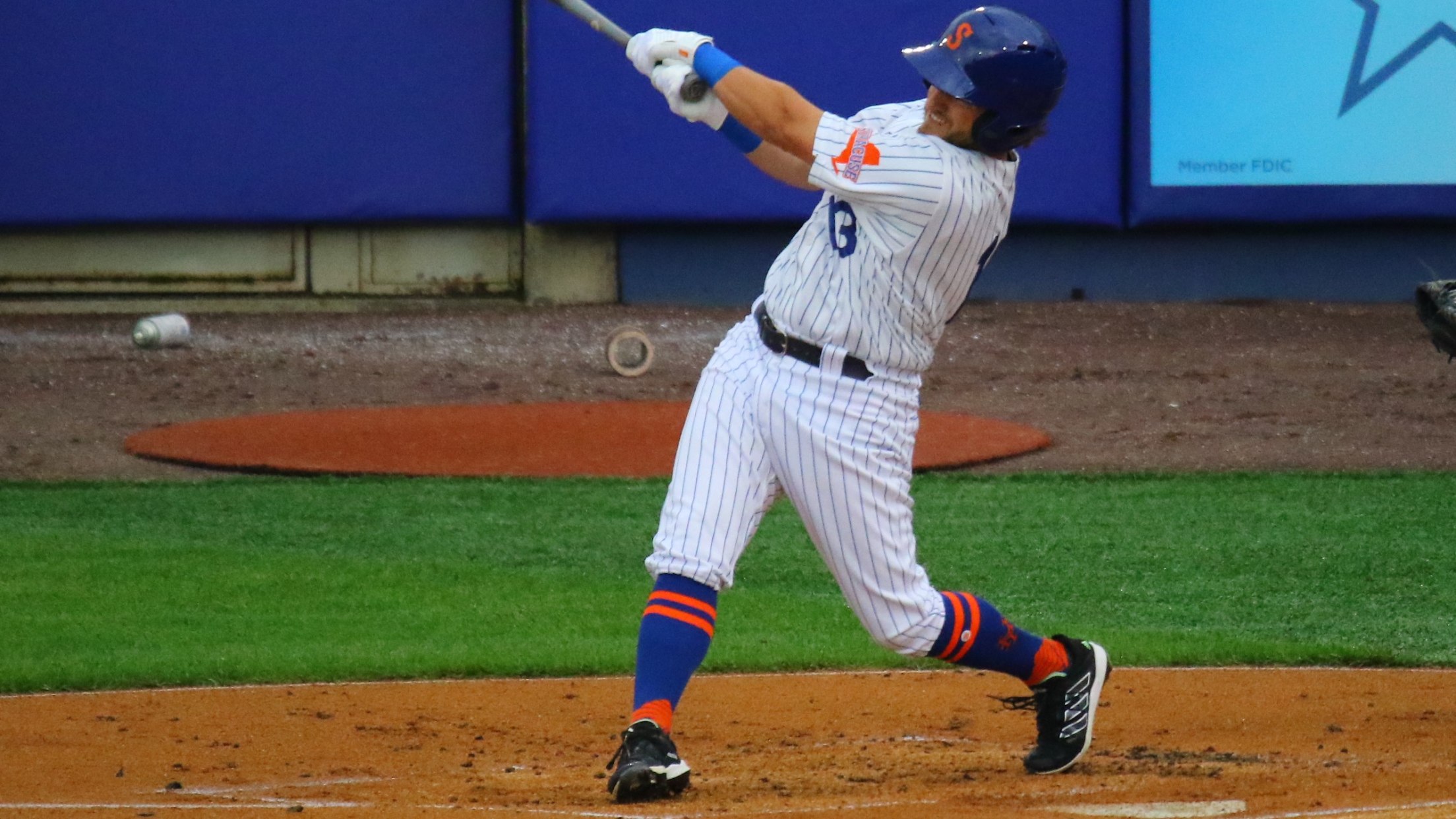 Just three days after being traded from Cincinnati, Mark Payton went 2-for-4 with two RBIs in his Syracuse Mets debut to help Syracuse snap a seven-game losing streak with a 10-8 win over the Scranton/Wilkes-Barre RailRiders on Tuesday night at NBT Bank Stadium.

Syracuse (24-48) used a huge bottom of the second inning to take a six-run lead. Chance Sisco led off the inning and was hit by RailRiders pitcher Luis Gil. After Cheslor Cuthbert flied out, Khalil Lee was hit by a pitch, and then Drew Jackson singled to load the bases. Orlando Calixte followed, drawing a bases-loaded walk to bring home Sisco and give Syracuse a 1-0 lead. Mason Williams also worked a bases-loaded walk to score Lee and make it 2-0 Mets. Payton followed with his first Syracuse hit, a two-run single to increase the lead to 4-0. Tovar then drew a walk to load the bases and was the last batter Gil would face. Brian Keller relieved Gil, and with Patrick Mazeika at the plate, Keller threw a wild pitch which brought home Williams to put the Mets up 5-0. Later in the at-bat, Mazeika hit a sacrifice fly, scoring Payton to cap off the six-run inning as Syracuse took a 6-0 lead.

Scranton/Wilkes-Barre (45-24) wouldn’t go away, however. In the top of the third, Matt Pita worked a leadoff walk. After Frederick Cuevas flied out, Thomas Milone and Andrew Velazquez hit back-to-back singles, the latter scoring Pita to put the RailRiders on the board and make it a five-run deficit, 6-1. Socrates Brito followed with a sacrifice fly, scoring Milone to make it 6-2 Mets.

The RailRiders tied it up in the top of the fourth. Armando Alvarez and Kyle Holder led off with singles, and then Brandon Wagner hit an RBI single, scoring Alvarez to cut the deficit to three, 6-3. Pita followed with a game-tying, three-run homer to make the score 6-6.

Syracuse took back the lead with a run in the fifth. The Mets loaded the bases with no outs after a Cuthbert walk, Lee single, and a Jackson walk. Calixte followed Jackson, striking out. Williams then hit a sacrifice fly into left field, bringing home Cuthbert to hand the Mets a 7-6 lead. On the play, however, Jackson was tagged out between first and second for the third out, limiting Syracuse to one run.

Scranton/Wilkes-Barre took their first lead in the top of the sixth. Cuevas led off with a single. After Milone was called out on strikes, Velazquez hit an RBI double to tie the game at seven. Socrates Brito followed with a one-run single, scoring Velazquez to hand the RailRiders an 8-7 lead.

Syracuse responded in the bottom of the sixth. Payton and Tovar led off the frame with walks. After Mazeika popped out, Sisco delivered with a go-ahead, two-run double to the center-field wall to put the Mets in front, 9-8.

Syracuse added a run in the bottom of the seventh. Jackson hit a leadoff single and stole second base with Calixte at the plate. Calixte flied out to right field, and Jackson tagged up and moved to third. Williams then hit a sacrifice fly to center field, scoring Jackson to make it a two-run lead, 10-8.

With the Mets still leading by two, Tom Windle came out to pitch the ninth for Syracuse and delivered a scoreless frame to earn the save, his second of the season.

The Mets and RailRiders return to NBT Bank Stadium for game two of the series on Wednesday night. Right-hander Akeem Bostick will make the start for Syracuse against Scranton/Wilkes-Barre southpaw Matt Krook. First pitch is at 6:35 p.m. and gates open at 5:30.