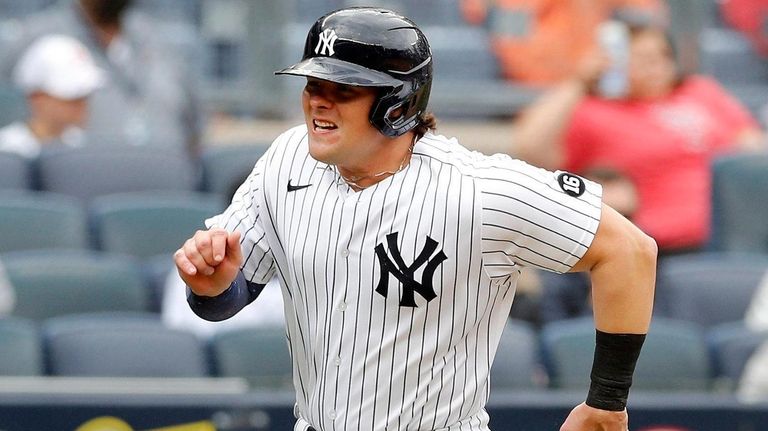 The usual exchanges of scouting information took place behind closed doors on Friday as the Yankees prepared to open the second half of their season. They came with an unexpected twist: there were also introductions and greetings among a group of fresh faces.

The Yankees roster was altered drastically by a COVID-19 outbreak that brought six new players to the Bronx for Friday’s contest against the Red Sox, including outfielder Trey Amburgey, who will make his Major League debut batting eighth and playing right field.

“I think we just try to control what we can control,” said ace right-hander Gerrit Cole, who will start Saturday. “We’re here right now getting ready for the game, shaking hands with the newcomers, getting them indoctrinated into the clubhouse and situated as best they can so they can perform tonight.”

The moves come as the Yankees embark upon a crucial stretch of their schedule, with 10 of their next 12 games against the Red Sox and Rays — including seven against division-leading Boston. Yankees manager Aaron Boone called it “a great opportunity” for the players who will see playing time.

“I think we very much understand the opportunity at hand,” Boone said. “Obviously, we know we’re dealing with some adversity and a tough situation. But we’ll try to embrace that as best we can. That’s our reality right now — we’ve got to go make the best of it.”

Stanton island
Though Aaron Judge landed on the COVID-19 injured list on Friday, Boone said no consideration was given to having Giancarlo Stanton play the outfield.

The Yankees are continuing to eye the July 30-Aug. 1 Interleague series against the Marlins as an opportunity to have Stanton make his first appearance of the season in the outfield. Stanton has not played a defensive inning since Sept. 28, 2019, as the club aims to protect him against injuries.

“Part of getting ‘G’ out there is the ability to give Judge a day off or a DH day,” Boone said. “That’s kind of what we’re working toward, but now with our roster situation, it definitely wasn’t a consideration today. It’s still, in my mind, very much in play moving forward.”

In the ninth
Given the state of the Yankees’ bullpen, which is missing Jonathan Loaisiga and Wandy Peralta due to COVID-19 protocols, Boone said that Aroldis Chapman could return to his ninth-inning role in a save opportunity. The All-Star struggled over his last four appearances, prompting Boone to bypass him during the series against the Astros.

“I’m not going to hesitate to put him in in the biggest spot in the ninth inning,” Boone said. “I think it’s important. This is something I’ve tried to reiterate to Chappy as well; for as great as his career has been, he’s not far removed from probably the best version of Aroldis Chapman that I’ve seen the first couple months of the season.”