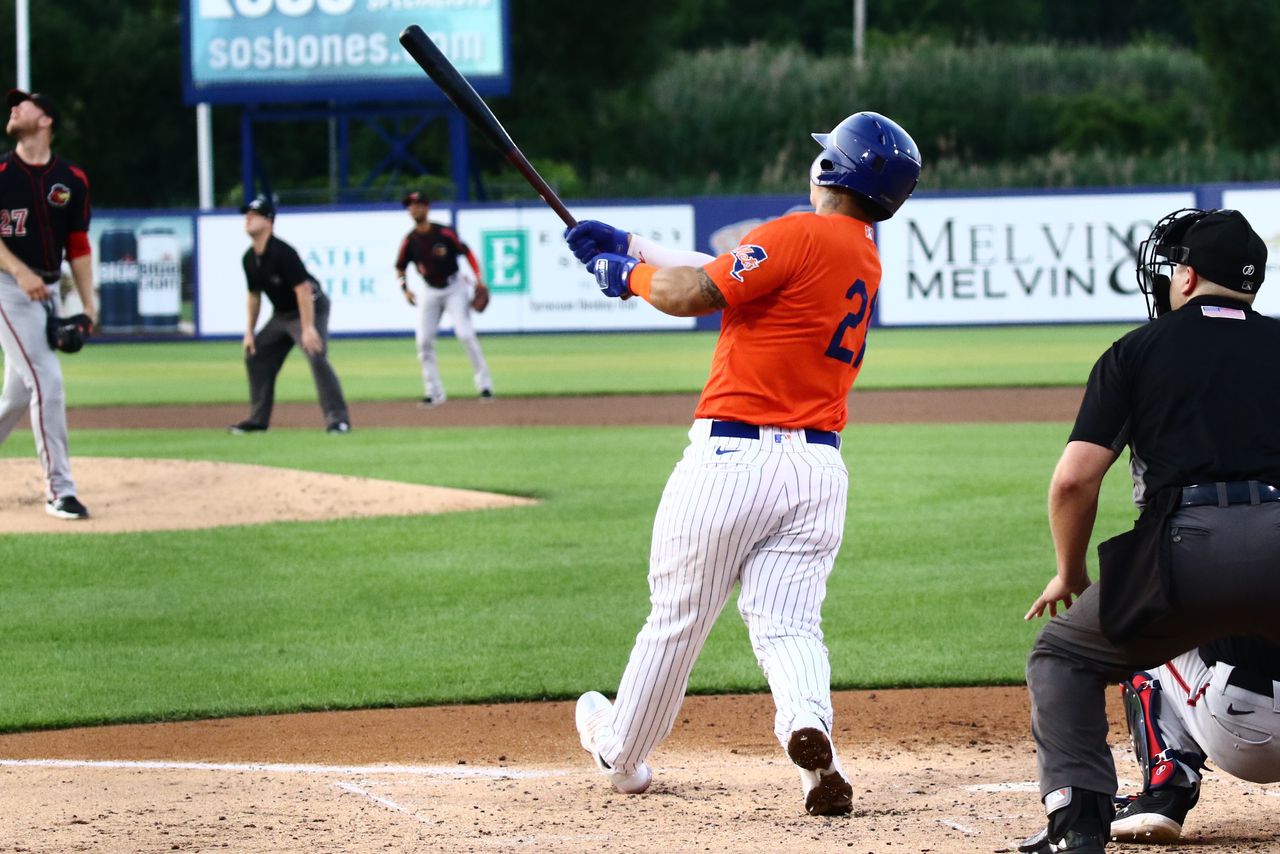 In game one, Rochester (26-35) struck first with a pair of runs in the top of the first inning. On just the second pitch of the game, leadoff hitter Andrew Stevenson hit a solo homer over the right-field wall to give Rochester a 1-0 lead. After Adrian Sanchez walked, Jake Noll hit a single, advancing Sanchez to second base. Next, Daniel Palka drove in Sanchez with a single to make it 2-0 Red Wings.

Syracuse (21-41) got on the board thanks to a Chance Sisco solo home run in the bottom of the second to cut the deficit in half, 2-1. It was Sisco’s third home run in ten games with the Mets.

Rochester responded with a big third inning. It started with Stevenson collecting his second hit, a single to right field. After Sanchez flew out, Noll singled, moving Stevenson to second. Next, Palka delivered with a three-run home run to give Rochester a 5-1 lead.

The Mets wouldn’t go down quietly, however. In the bottom of the fourth, Davis hit a solo shot to bring Syracuse within three, 5-2.

The Mets added two more runs in the bottom of the fifth. Mason Williams led off the frame and sent a ball into center field that got past the center fielder Stevenson, allowing Williams to get all the way to third base. It was ruled a single and a two-base fielding error.

Next, Brandon Drury hit an RBI single to make it 5-3 with Rochester still in front. A wild pitch advanced Drury to second, and a Travis Blankenhorn ground out moved Dury to third. Davis then scored on a Patrick Mazeika groundout to second to make it a one-run contest, 5-4.

However, Rochester pulled away in the top of the seventh. Stevenson led off with a single, and Sanchez followed with a double to put runners at second and third. Noll then stepped in and hit a sacrifice fly to right field to score Stevenson from third and make it 6-4 Red Wings. After Palka walked, Derek Dietrich connected on a three-run homer to put the game on ice and give Rochester a 9-4 advantage.

In game two, the Red Wings scored in the first inning once again. Humberto Arteaga hit a one-out triple to right field. After Palka popped out, Noll doubled to bring home Arteaga and give Rochester the early 1-0 lead.

However, Syracuse set the tone in the bottom of the first inning, starting with a Cameron Maybin leadoff double. After Albert Almora Jr. grounded out, Mazeika hit an RBI single to tie the game, 1-1. Next, Cuthbert blasted a ball over the 315 Bullpen Bar in left field and out of NBT Bank Stadium for a two-run homer to give the Mets a 3-1 lead.

Nick Tropeano got the start on the mound in game two for the Mets, his first with Syracuse in his fourth appearance, and went three innings, allowing just one run on two hits while walking one and striking out two.

In the bottom of the fourth, Cuthbert delivered again with another home run, his second of the night, this time a solo shot to extend the Mets lead to three, 4-1.

In the top of the fifth, Rochester made its move. Mets reliever Geoff Hartlieb allowed a one-out single to Arteaga, and then back-to-back walks to Palka and Noll to load the bases. Bradley Roney came in to replace Hartlieb and surrendered a single to Dietrich which scored Arteaga and that cut the Red Wings deficit to two, 4-2.

Next, Alex Dunlap hit into an RBI fielder’s choice to score Palka and make it 4-3 with Syracuse still in front. Carlos Tocci followed and hit a go-ahead, two-run double to give the Red Wings their first lead, 5-4.

The Mets answered with two runs in the bottom of the fifth. Almora Jr. lifted a one-out single to center field. After Mazeika struck out, Cuthbert drew a walk. Orlando Calixte followed and came up clutch with a go-ahead, two-run double to give the Mets back the lead, 6-5.

Syracuse added a run in the bottom of the sixth. Martin Cervenka led off with a single and advanced to second on a wild pitch while Jackson was at the plate. Jackson and Lee were retired, but Maybin picked up his third hit, an RBI single to give the Mets a 7-5 lead.

With Syracuse leading by two, Stephen Nogosek came out of the bullpen to pitch the seventh for the Mets and earned the save, striking out Stevenson to end the game.

The Mets and the Red Wing return to NBT Bank Stadium on Thursday night for a 6:35 p.m. first pitch. Alex Sanabia will take the ball for Syracuse against Rochester’s Ben Braymer. Gates open at 5:30.