The Cayuga Nation is suddenly clearing its self-made debris within Seneca Falls — without possessing any permits from the county whatsoever — while simultaneously creating their own in the name of sovereignty.

It’s been sixteen months since an overnight demolition of Nation-owned properties had been orchestrated by the Cayuga Nation Police Department in conjunction with local, state law enforcement who watched from afar one winter night in late-February along State Route 89. 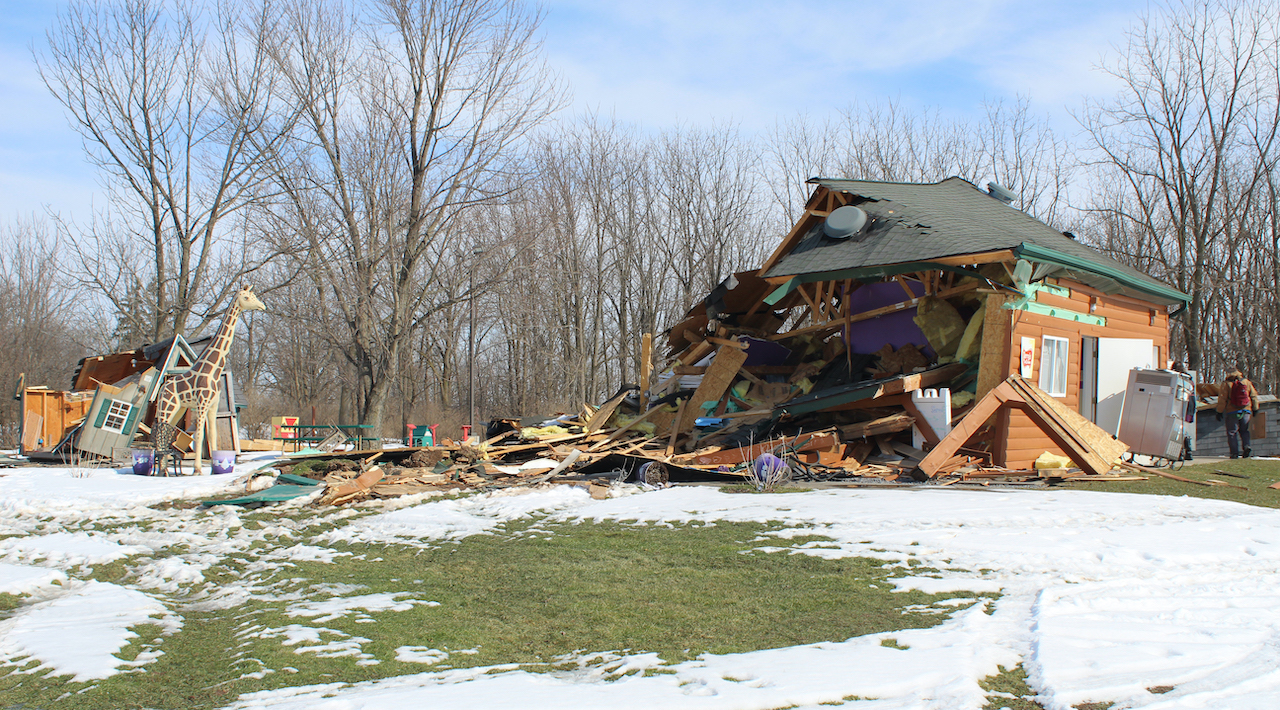 Sugar Shack, an ice cream stand along State Route 89 had been destroyed during the property take-back on February 22, 2020. Photo: Gabriel Pietrorazio, FingerLakes1.com.

Now, the Nation has been clearing their fee lands ever since Wednesday, June 30, according to eyewitness sources.

It was only less than a month ago when a Seneca County Board of Supervisors presentation offered by Frank Sinicropi, the county’s treasurer, eventually turned into a controversial shouting match between county officials.

Sinicropi believed the buildings are an “eyesore” in their current condition, becoming a home for feral cats, rats, skunks, raccoons, possums and even “other wild animals not wanted in our one neighborhood.”

Last spring, the Nation paid the county’s permit fee in March, but had been denied one because of their outstanding tax balance.

More than 472-days later, the properties were left in such disarray that Sinicropi even advised supervisors to make an exemption to a preexisting county rule regarding the issuance of construction and demolition permits during their meeting on Tuesday, June 8.

Supervisors Cindy Lorenzetti and Ralph Lott vehemently opposed Sinicropi’s proposition. Although some officials aired their deep-seeded disdain against the Nation, Sinicropi advised supervisors to “consider the necessary temporary changes to the law to resolve this stalemate” between Seneca County and the Cayuga Nation.

He even warned them that “without action from you, nothing will be done” — and yet the Nation acted anyway — in the absence of any intervention at the county level. In fact, the Nation has admittedly moved forward “in deference to the Seneca Falls community,” according to Maria Stagliano, an account executive at Levick.

Speaking on behalf of their tribal government leadership, Stagliano says in a press statement that the Nation’s actions are “taken under its authority as a sovereign Indian nation to issue these permits and begin the work needed to remove concerns regarding the debris.”

Previously, the Nation sought to cooperate, attempting to “work in good faith with the county by deferring to the county’s processes,” claiming no obligation to do so either.

“The Cayuga Nation has said repeatedly that it would remove the debris immediately after receiving a permit to do so,” Stagliano wrote. “By issuing its own permit pursuant to its sovereign authority, cleanup is underway.”