Sugar+Snow offers more than shaved ice: Opportunities for redemption, acceptance with a community

Local resident Erin Pownall Burns has started her own business selling snow cones with a twist and other sweet treats. While the business, Sugar+Snow, boasts a significant menu, snow cones aren’t the only interesting thing happening.

Pownall Burns employs members of the community who are experiencing unique circumstances. Specifically, those with felony records, released from jail or prison recently, or even those in recovery from addiction.

“America is all about the product and the customer and that’s great to have those, but it seems like the most important thing is your employees,” Pownall Burns said.

The business model for Sugar+Snow is unique in the way that the focus remains on the individual working before the product. What’s being produced by Sugar+Snow are individuals who have gone from incarcerated and in active addiction to employable and have proven themselves to be reliable workers. In return they receive fifteen dollars an hour, experience, and a reference for their next job. Pownall Burns describes working for Sugar+Snow as a job with “a lot of free advocacy.”

Pownall Burns described hiring the first employee. They met at a meeting and she approached her, describing the business she was starting. She asked if the woman knew anyone looking for a job. The woman said she was, and happened to have her resume on her.

“She goes to get the resume, and gets this look. She said she should tell me that she has a felony,” Pownall Burns said. “I asked if she thought that would impact making shaved ice. She asked if I wanted to know more about it so I asked if she wanted to tell me more about it,” the entrepreneur recalled. “She said not really. Can you imagine having to go through all of that trauma and dragging it up at an interview… the most shameful thing you have ever done in your interview clothes?” 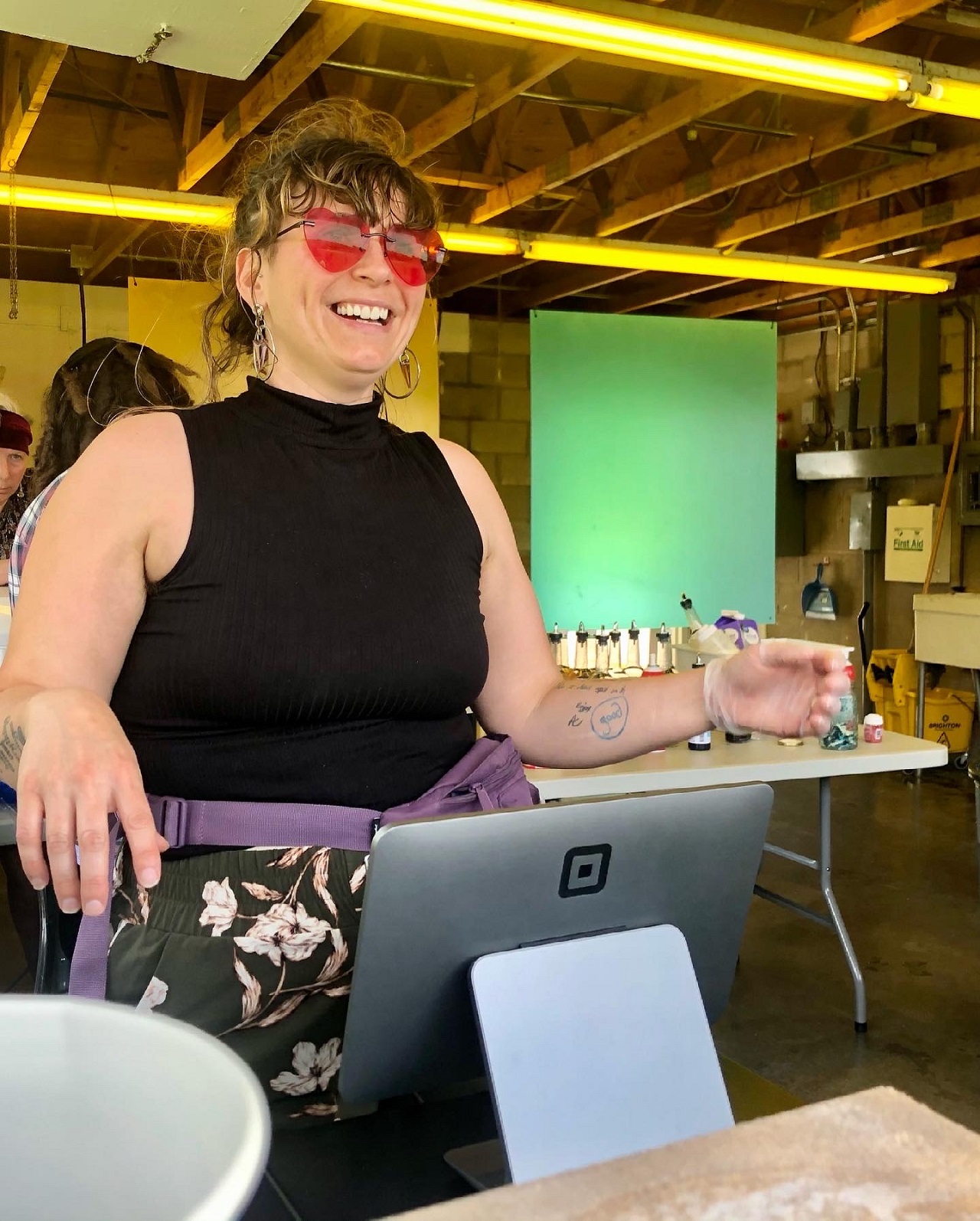 Pownall Burns described how she believes providing employment to individuals who currently lack the ability to obtain it due to their record is important. She explains that addiction and recovery services are flawed and society needs to open doors instead of close them. By providing opportunities for individuals to feel good about themselves, it starts to help them believe they should feel good about themselves.

Pownall Burns explains that the business gives support to individuals who are transitioning from incarceration or treatment to a normal, working life. If an employee is called for a random drug screen while working, she lets them go as well as providing transportation if they need it. She described an employee who had a sick grandparent, and though she has the role of being their boss, provided the transportation necessary for the employee to visit their grandparent. She stresses the importance that many individuals in this position not only lack credibility for employment, but transportation to get there. She drives to pick up her employees before shifts if they need it. 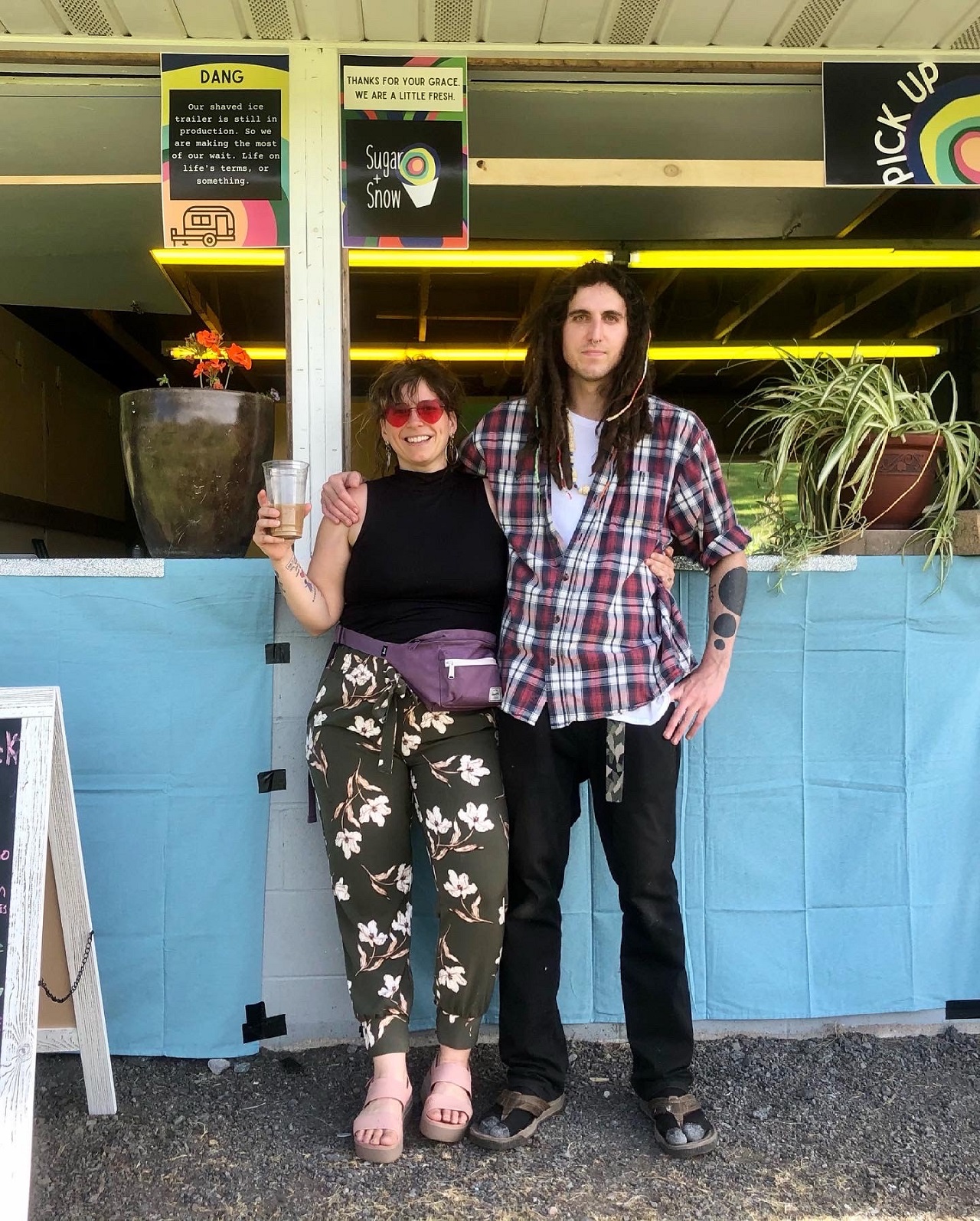 “I try to write letters of advocacy to treatment court, outpatient or anything that they need regarding that,” Pownall Burns said. Her business model also works to be the part of an individuals life that fills in the cracks of everyday living; supporting their relationships, getting places, and doing things that current support systems might not be doing for these individuals as they transition.

“Systems are obsessed with reducing intimacy because they think it’s bad for business. Everything is a liability, and the way I’m operating is the complete opposite,” she stated. “I want people to know who I am. I want to have a relationship with the people that are part of the team I’m working on and I want it to be something that we’re all doing together.”

Pownall Burns explained that she wants her employees to have the freedom to make decisions, have accountability, but most importantly autonomy over themselves.

“I also want to trust them. I want the baseline to be one of trust. If that trust is violated then it’s treated as a learning opportunity. It’s a bump in the road, and that has happened, so I need to have backup employees too so the business can run,” Pownall Burns said.

She explained that after a season of an individual working, she feels comfortable to give them a positive reference. The goal is not to give an employee a career in snow cone making, but to be a stepping stone for them to work, make mistakes, learn, grow and become an employable individual who is able to move on to a bigger and better job opportunity.

“That’s what this is all about, inclusion. We, our systems, punish people who are in recovery. They exclude them whether that looks like prison, not being able to get a job, needing to fill their entire day with programs and outpatient, just the stuff that keeps them away from society,” Pownall Burns said. “What I want to do is figure out how to come in alongside them, and make them know that they’re worth it and include them in everything. I want to do team days and take them for pizza, go to the beach.”

“They get paid $15 an hour because I think it’s really important to pay people a livable wage, and I’m not rich or anything but I can figure out how to pay someone $15 an hour,” she said.

Pownall Burns described her inspiration for creating this business from a trip she took to Italy with her husband before the pandemic struck.

“We went to Italy and there was a rehab with 1000 people living there,” she explained. “It’s a three and a half year program and they have a 70% substance free success rate five years after their patients leave.”

She described a treatment facility where patients were forced to solve conflict and learn to build relationships. For the first year a patient had someone called a “follower” who followed them everywhere. After that person was there for a year, they became a follower. There was never anyone alone on the campus and it helped to build intimacy instead of seclusion. She described how each section of the treatment facility had their patients working jobs like wallpaper design, or creating scarves to sell, and it was all collaborative amongst the group in the section while still allowing individuals to take ownership of the jobs they completed. This gave Pownall Burns the idea for Sugar+Snow.

“Both employees I have came up with the ideas for the specials, like our Shark Attack snow cone,” she said.

Pownall Burns said that she will be speaking at the Recovery Conference in Albany in October, explaining how employment works as a pathway to recovery.

“Work integrates identities for people,” she explained. “When they lose their jobs because of an addiction related crisis, it causes all sorts of other problems and really messes with a persons self esteem. I want to help bring some of those pieces back using tangible, in the field, real life learning. In the weeds; learning to deal with stress, learning how to deal with real life stuff, because life just happens and keeps happening no matter where we are on our journeys. We have to learn how to cope with that in order to be successful.”

Pownall Burns was transparent with her own journey to success and how she found ways to better build the business model.

“For me, I remember when I was in early recovery,” she said. “I was going to school full tie and people told me they didn’t know if I should be doing that. I needed to do that because I needed to do something that would re-socialize me in a healthy way that was stimulating for my mind. I think that employment is one of those things.”

While the business focuses heavily on producing employable people and reintegrating them back into society, the product of these employees are various frozen treats.

On Saturday, June 5, 2021 Sugar+Snow celebrated its grand opening at the Shortsville Budd Park on Waterstreet. ROCovery Fitness of Rochester was also present to provide free Narcan and training along with a kickball tournament. 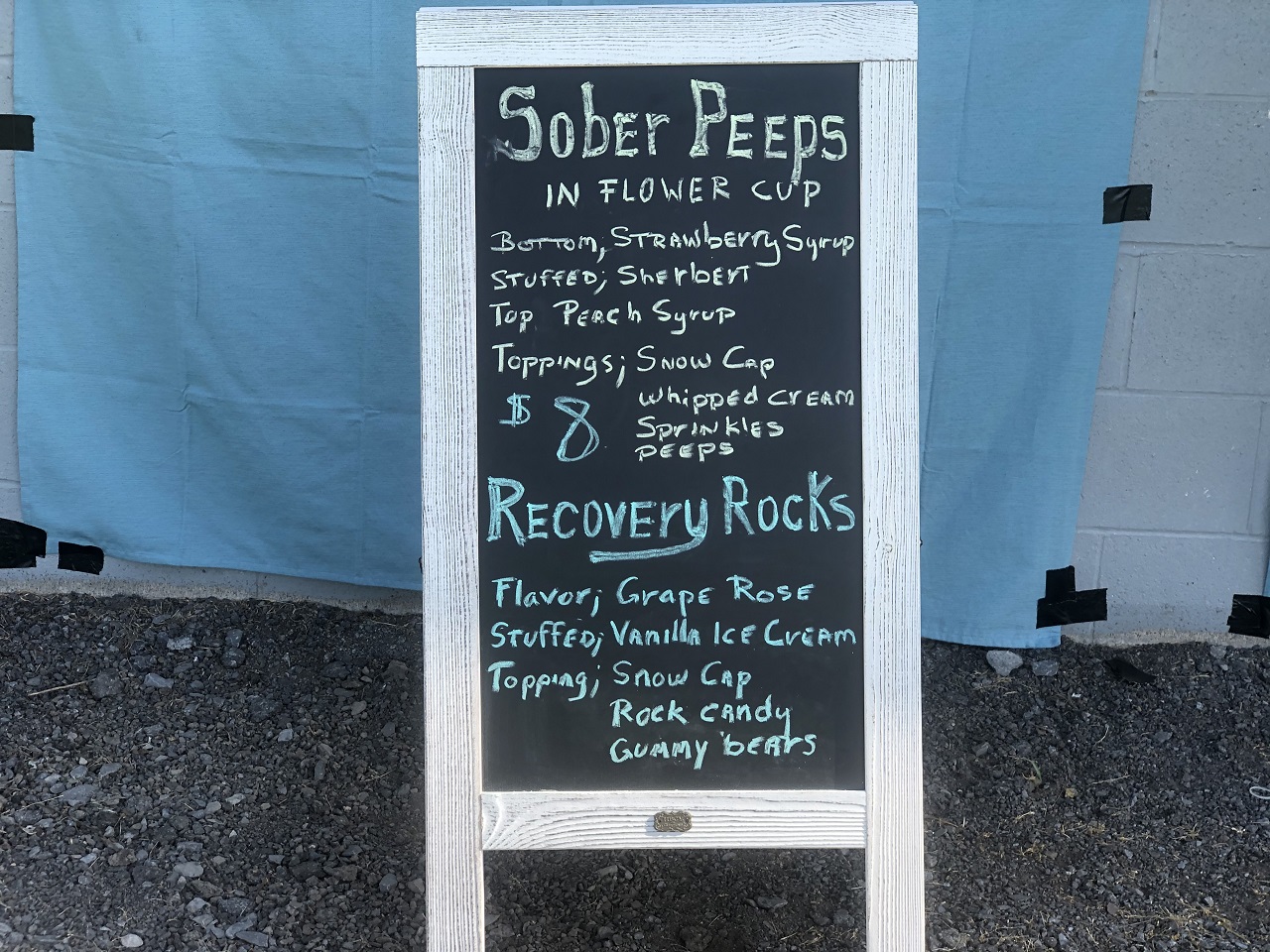 One special included in the grand opening was the Shark Attack in a flower cup, made up of blue raspberry flavored shaved iced, stuffed with sherbet, and toppings of blue curacao, snowcap, whipped cream, a cherry, sprinkles and shark gummies. There were also specials like a chai slushy with almond milk, a cold brew slushy, and a lemon ginger kombucha slushy. 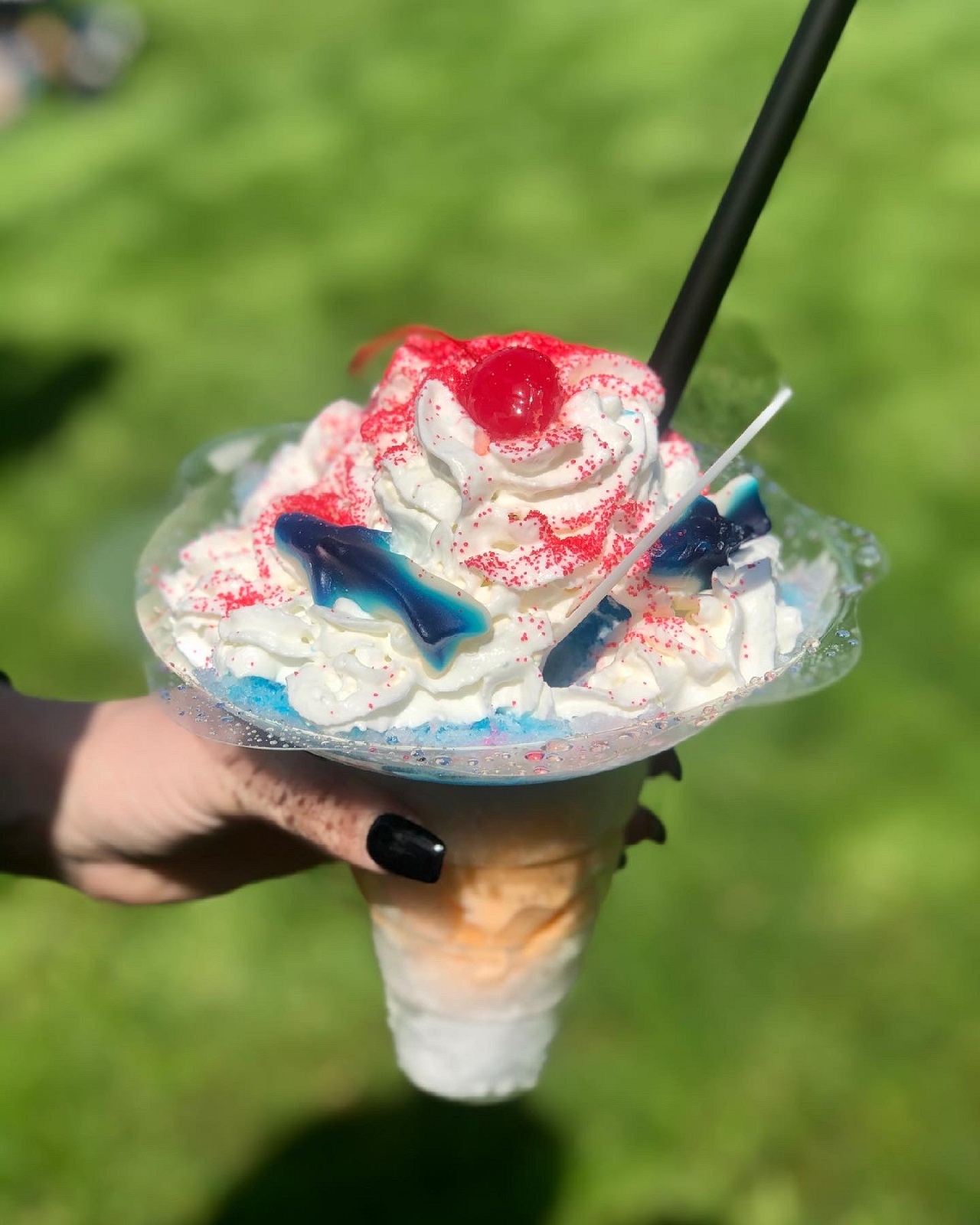 The regular menu has four steps to choose a dish, the first being size, second choosing a flavor, third a filling, and finally the various toppings ranging from tajin seasoning on the rim to gummies.

Information on Sugar+Snow popups that will be happening this summer can be found on their Facebook page, and the mobile business will be available for neighborhood parties after the 4th of July weekend. 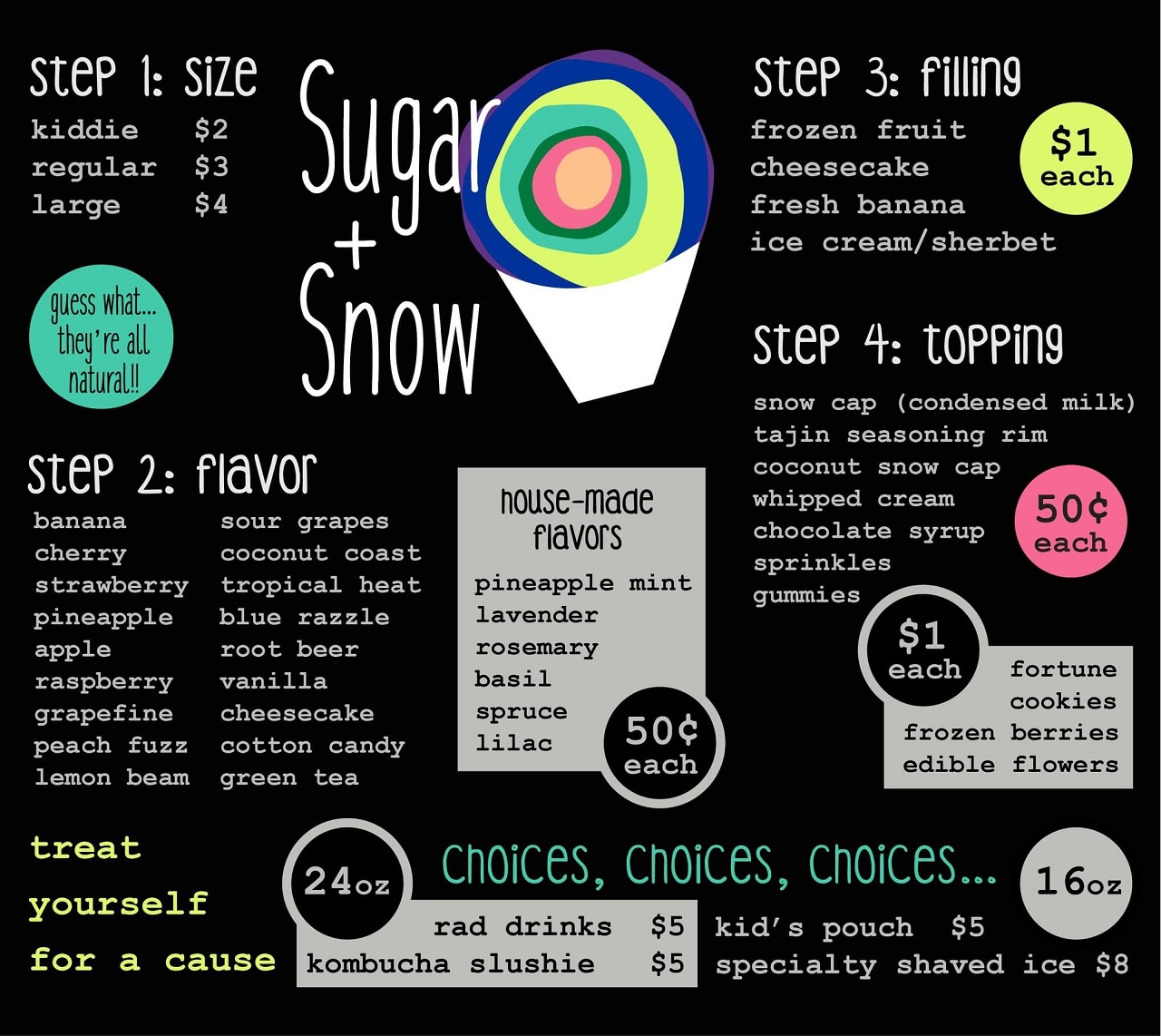