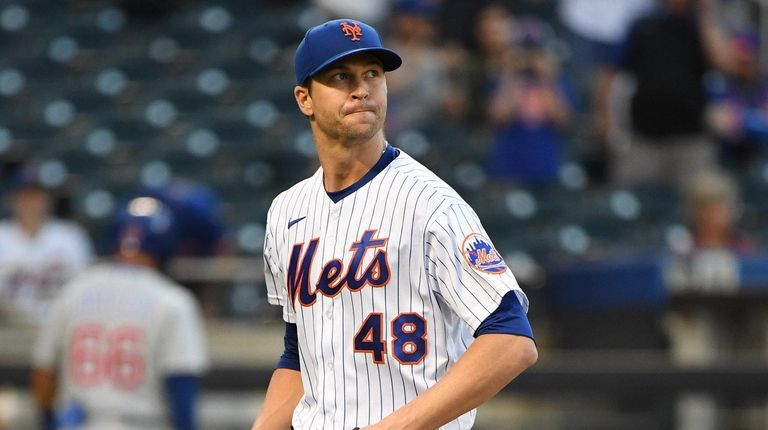 The story of Jacob deGrom’s 2021 season — for better and for worse — continued on Wednesday evening at Citi Field. As usual, deGrom was unhittable, firing three perfect innings with eight strikeouts to lower his Major League-leading ERA to 0.54.

Then deGrom departed due to a bout of right shoulder soreness, giving way to reliever Sean Reid-Foley in the fourth inning of a 6-3 Mets win over the Cubs.

deGrom had exited his previous start after only 80 pitches due to what the Mets called a bout of right flexor tendinitis, but he completed his between-starts routine without issue and convinced the Mets that he was fine to pitch against the Cubs on Wednesday. That lasted only the first three innings of a game that saw the Mets lean on two home runs and a fine bullpen performance to take their third in a row from the Cubs.

Despite deGrom’s excellence this season, he has been continually dogged by minor injuries, including a bout of right side tightness that landed him on the injured list in May. deGrom also missed a start earlier this year due to right lat tightness, and he has suffered from back and neck stiffness in recent months.

Shoulder soreness hints at a new injury for deGrom, who has not dealt with a documented shoulder injury since his rookie season in August 2014. That issue cost deGrom only two starts, and he was back at full strength by the end of the month.

Since that time, deGrom has developed into one of the best and most durable pitchers in the Majors, eclipsing 200 innings every year from 2017-19. He has also become the game’s hardest-throwing starting pitcher, topping out at 102 mph and frequently hitting triple digits.

“He creates so much force,” Mets manager Luis Rojas said earlier Wednesday. “I don’t know if it’s something that is causing him some of the tension in some areas at times. But what I can tell you is his mechanics are so clean. They’re fun to watch, and his anatomy for a pitcher is perfect — the long extremities and everything, it’s beautiful to watch.”

deGrom hit 101 mph against the Cubs, adding to his legend with a run-scoring single for his sixth RBI of the season in the second. And while deGrom retired nine consecutive batters on the mound without much obvious effort, he did grimace following a pitch to Eric Sogard in the top of the third. The two-time Cy Young Award winner was out of the game minutes later.