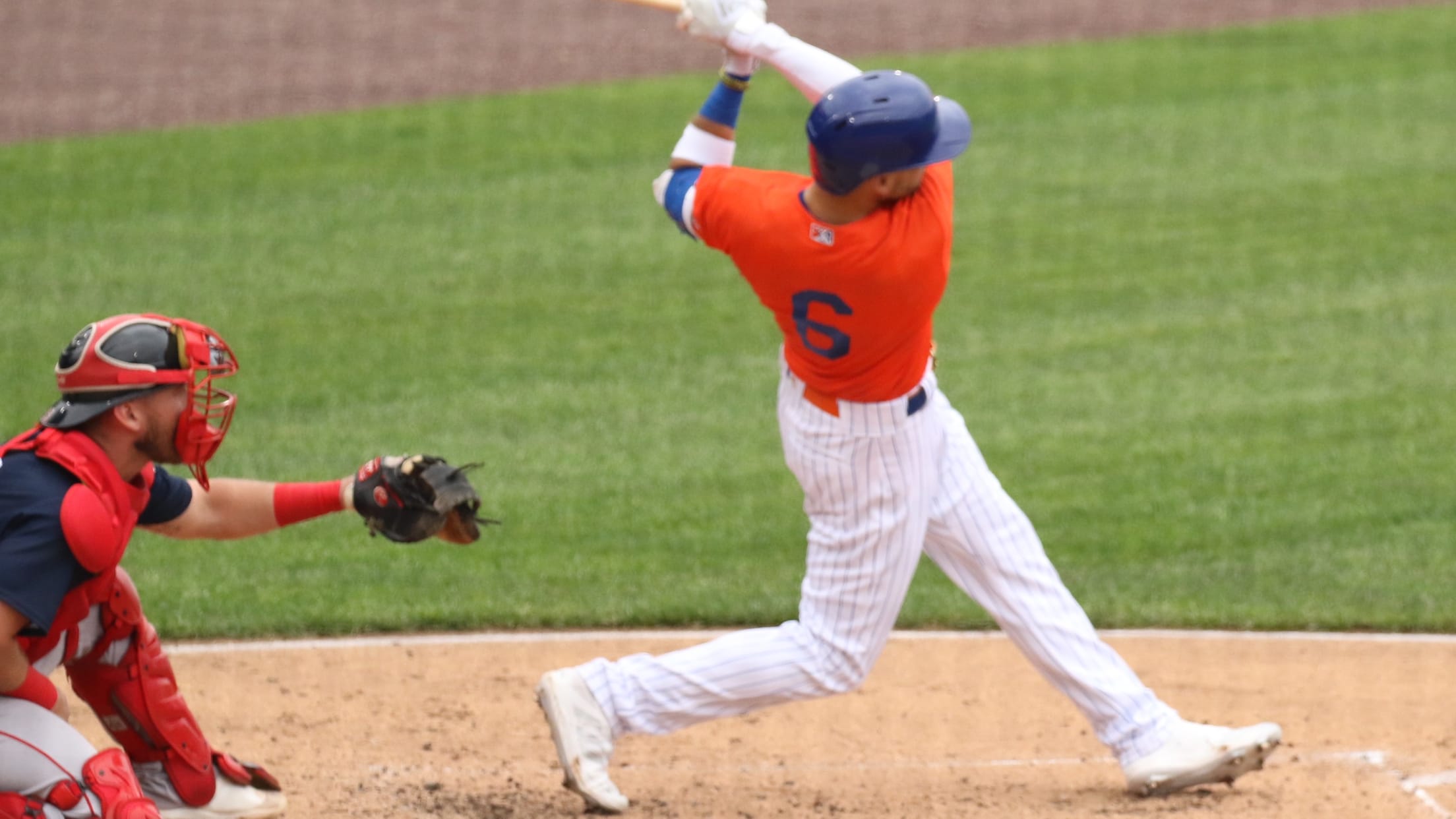 Worcester’s offense erupted again, and the Red Sox topped the Mets, 12-5, on Wednesday afternoon, taking a 2-0 lead in the six-game series. The Woo Sox scored a combined ten runs in the fourth and fifth innings to pull away from the Mets on virtual Education Day at NBT Bank Stadium. The virtual Education Day took place in lieu of an in-person event and allowed students from both Syracuse and Worcester to watch the game online and in their classrooms.

Worcester (19-13) picked up where they left off on Tuesday night with a run in the top of the first inning to begin Wednesday’s game. With one out and nobody on, Marcus Wilson launched a solo shot over the 315 Bullpen Bar in left field to give the Woo Sox an early 1-0 lead.

The second inning featured yet another Worcester home run. Johan Mieses smacked a solo home run to left-center field and the Red Sox went up 2-0.

Syracuse (11-21) responded with a two-out rally in the bottom half of the second. With no men on and two down, Wilfedo Tovar drew a walk. Next, Martin Cervenka singled on a line drive to left, and then Drew Jackson hit a two-run double to score Tovar and Cervenka and tie the game, 2-2. Then, Albert Almora Jr., who is on an MLB rehab assignment with Syracuse, smoked a two-run home run over the left-field wall to give the Mets their first lead at 4-2.

Worcester opted to keep their starting pitcher Raynel Espinal in the game, and he did not disappoint. The righty proceeded to deliver four consecutive perfect innings after a four-run second and finished the game with six innings pitched, four runs, two walks, and three strikeouts.

In the fourth, Worcester scored five runs all with two-outs to regain the lead. Wilson got the rally going with a single to left to score Jack Lopez and cut the deficit to one, 4-3. That would end Syracuse starter Thomas Szapucki’s day as he was replaced by Marcel Rentería. The first batter Rentería faced, Franchy Cordero, singled on a line drive to left field to tie the game, 4-4. Next, Michael Chavis hit a three-run homer to give the Woo Sox a 7-4 advantage. Two runs were charged to Szapucki after he exited, and his final line featured three and two thirds innings pitched, five runs, three walks, and three strikeouts.

The scoring continued for the Red Sox in the fifth, adding five runs to their total. Lopez doubled to score Jonathan Araúz and make it an 8-4 Worcester advantage. Then with the bases loaded, Wilson was hit by a pitch and Chris Hermann scored for a 9-4 lead. Cordero followed, ripping a two-run double to right, extending the Worcester lead to seven, 11-4. The last run of the inning came off a Jeter Downs sacrifice fly to bring home Wilson and make it 12-4 Red Sox.

In the seventh, the Mets were able to get back on the board. Tovar and Cervenka both singled, and a Jackson groundout advanced Tovar to third base and Cervenka to second. César Puello followed with an infield single to score Tovar and make it 12-5 with Worcester still in front. With two-outs and runners on the corners, Orlando Calixte grounded into a 6-4 putout, and Syracuse left two runners stranded.

In the ninth, Syracuse put position player Sebastian Elizalde in to pitch, in what was the 11-year veteran’s first time on the mound. He proceeded to put together a 1-2-3 inning and tipped his hat to the crowd on his way to the dugout.

Worcester still won, 12-5, to take the second game of the six-game series. The Mets and Red Sox will square off again tomorrow night at NBT Bank Stadium. First pitch is at 6:35 p.m.