A protest led by the Ithaca Tenants Union in partnership with the Party of Socialism and Liberation and Gayogo̱hó꞉nǫʼ Cayuga peoples grabbed the attention of the federally-recognized Nation’s leadership and a crisis public relations firm based out of the nation’s capital.

As the solidarity campers continue staying outdoors to stand watch in Seneca County, the Ithaca Tenants Union organized a demonstration on Saturday, May 22, billing it as a “protest against the violent evictions and human rights abuses of Gayogo̱hó꞉nǫʼ Nation BIA [Bureau of Indian Affairs] Rep. Clint Halftown.” 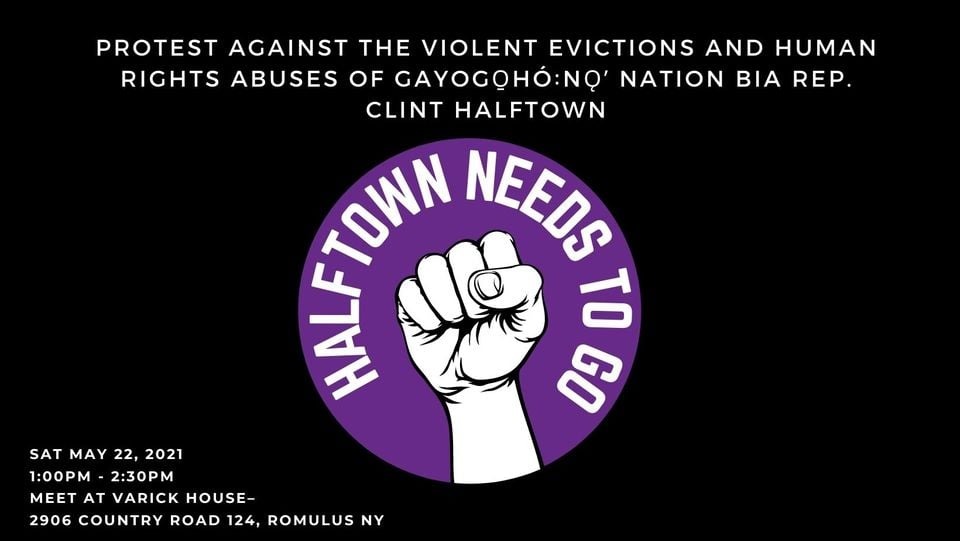 The dubbed “Halftown Needs to Go” demonstration gathered a fairly sizable crowd at the ‘Varick house,’ which is located on 2906 Country Rd. 124. Grassroots organizers including the local Finger Lakes chapter of the Party of Socialism and Liberation as well as student organizations from Cornell University also arrived in Seneca Falls over last weekend.

Fifty to 60 activists amassed outside the Cayuga Nation’s headquarters along State Route 89, while chanting and shouting filled the afternoon air.

“No Clint, no BIA, rent-a-cops gotta go away,” the roaring crowd repeated in an Instagram TV livestream. “No good cops on stolen land…. no peace on stolen land.”

A fenced driveway entrance was closed shut with a Cayuga Nation police vehicle parked in front of the metal gate.

Hours after the protesters vacated the premises and their demonstrations eventually ended, Maria Stagliano, an account executive at Levick, a Washington-based crisis public relations firm that specializes in reputation management, contacted FingerLakes1.com later on that same day.

“Although the Cornell students who founded the organization [Ithaca Tenants Union] show great empathy, they are misinformed about the Cayuga Nation’s intentions,” Stagliano exclusively wrote to FingerLakes1.com.

In her statement on behalf of the Cayuga Nation, she announced that the federally-recognized Unity Council intends on honoring Governor Andrew Cuomo’s extension of the statewide moratorium on residential evictions for their “14 illegally occupied residences” until August 31.

In a follow up inquiry on Monday, May 24, Stagliano insisted that the Nation has “the sovereign authority to evict” but still seeks to respect the state’s moratorium “not because it is compelled to do so.”

“We remain in the midst of a global pandemic and we recognize the difficulties of finding a new home at this time, particularly if you are concerned about becoming sick or losing a job,” Stagliano admitted.

She even mentioned that the Nation views evictions as “a last resort,” vowing that it will continue to work “in good faith to resolve this issue amicably and respectfully — even as the residents of these illegally occupied properties have refused to do so.”

“We are open to continuing discussions to find a mutually beneficial solution post August 31, if needed,” Stagliano later wrote.

An estimated $700,000 in outstanding rent payments are still owed by Gayogo̱hó꞉nǫʼ tenants within the 14 Nation-owned properties that are scattered across Seneca County.

And the Nation is now claiming that their “refusal to pay rent” has resulted in “the detriment of Nation’s members at large,” according to Stagliano.

“Rent fees — which are only a fraction of the market value for our properties — are used by the Nation to provide benefits to community members such as jobs, healthcare coverage, government services, fresh produce deliveries, and annual community events,” she explained.

Joseph E. Fahey, the Nation’s civil court judge, is currently in the process of signing default judgments against the defendants “because no one appeared, despite seeking multiple extensions” after the second court summons recently concluded on Tuesday, May 10.

Admittedly, Cayuga traditionalists have never seen the Cayuga Nation Civil Court as legitimate — the Bureau of Indian Affairs even revealed to FingerLakes1.com that the Nation doesn’t possess a Public Law 93-638 contract for any tribal court program.

However, nothing seems to be stopping the Nation from “exploring additional actions to further enforce those judgements” in their efforts to either “take action to remove these occupiers or collect all past due rent.”

Find out how to get $30,000 for homeowner expenses

45 mins ago
People have qualified for various stimulus checks this year. One major way is through child tax credits, with only one ... MORE

2 hours ago
Many seniors are enrolling in Medicare for their first time in 2022, and with all the different parts, there are ... MORE

2 hours ago
Various stimulus programs have been created under the American Rescue Act to help struggling Americans. One of the measures allows ... MORE

How do I get my child tax credit payments in 2022?

2 hours ago
The American Rescue Act has afforded over 36 million Americans reprieve in the form of advanced child tax credits. It’s ... MORE

4 hours ago
People that save for retirement have an opportunity to earn $2,000 next year. The IRS has expanded its eligibility range ... MORE

5 hours ago
Specific employees can expect to see a check worth anywhere from $500 to $1,000 ahead of the holiday. The bonus ... MORE