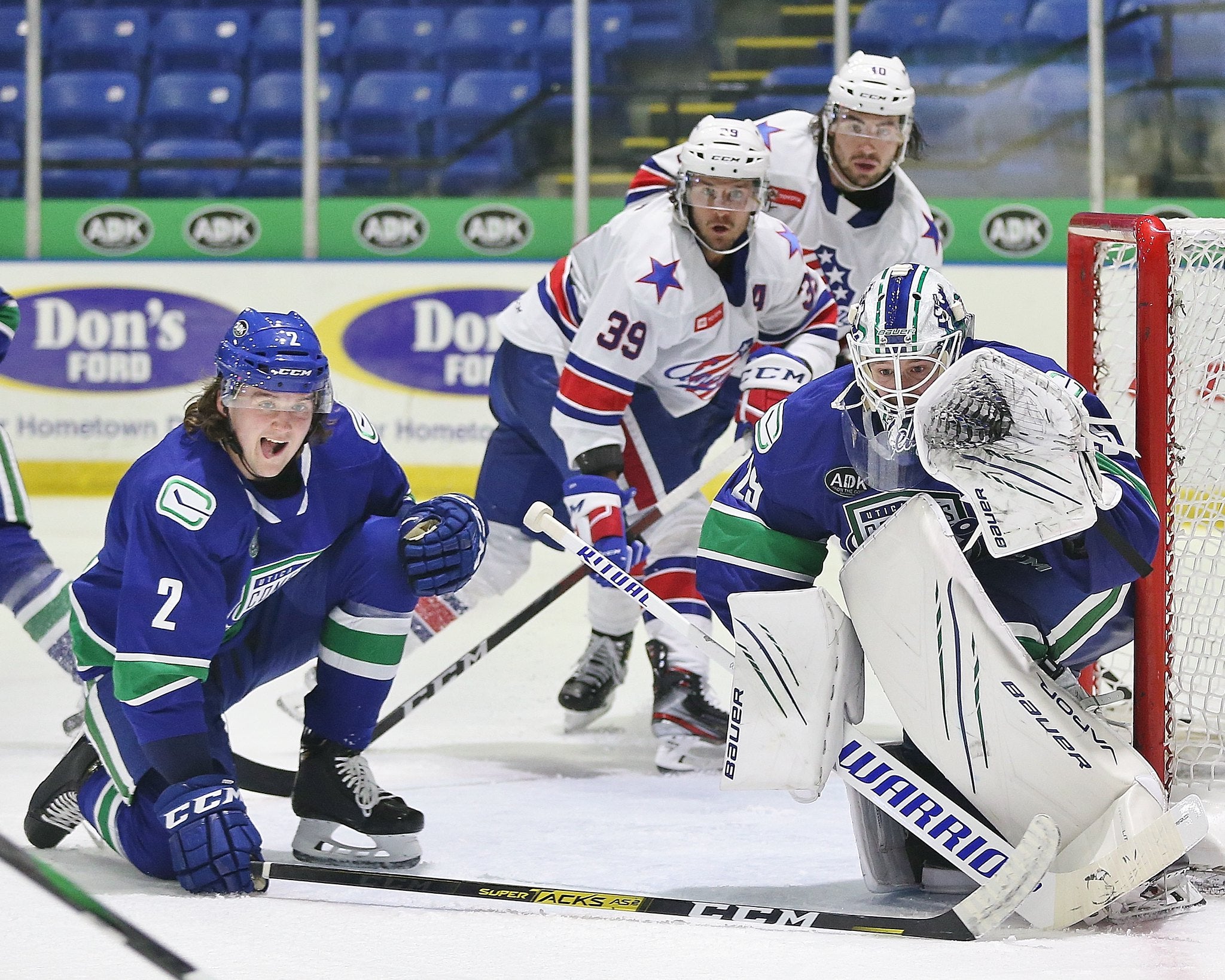 Facing a 2-1 deficit in the closing minutes of the second period, the Rochester Americans (8-5-2-1) reeled off three straight unanswered goals, including the game-winner from rookie forward Dominic Franco, on their way to a 4-2 win over the intrastate rival Utica Comets (6-3-0-1) Friday at the Adirondack Bank Center.

With the win, the Amerks extended their point streak to three straight games (2-0-1-0) and have now collected at least one point in 23 of the last 32 games against Utica dating back to the start of the 2017-18 campaign, going 17-9-2-4 over that span.

Franco’s first pro goal midway through the third period broke a 2-2 tie and the Amerks held on for their third win of the season over Utica. The first-year forward has collected points in three straight games.

Forward Remi Elie (1+1) and defenseman Oskari Laaksonen (1+1) each scored a goal with an assist while picking up their third multi-point outings of the season. Laaksonen is now tied for second amongst all AHL rookie defensemen in assists and fourth in points while also showing goals in two of his last five appearances. Forwards Jean-Sebastien Dea (0+1), Brett Murray (0+2) and Patrick Polino (0+1) and defenseman Mattias Samuelsson (0+1) all added assists on the night while veteran forward Michael Mersch scored his fourth goal in the second period to ignite the rally.

Rookie goaltender Ukko-Pekka Luukkonen (7-4-2) made his fifth consecutive start in the crease for Rochester and 10th in the last 11 games, making 34 saves to pick up his second win of the month. The Finland native ranks sixth in the AHL in wins and has made 25 or more saves in nine of his last 12 appearances dating back to a career-best 43-save performance at Cleveland on Feb. 12.

On the board first thanks to Oskari Laaksonen with a one-timer. 👊

We got veterans out here tying things up. 💪

We got the young guns out here making moves. 😎

What next for Geneva’s Trinity Episcopal Church? (video)

3 hours ago
After long negotiations and meetings, the Trinity Episcopal Church was officially sold to McGroarty Investments in early June. Real estate ... MORE

UBI payments in every city in the United States

23 mins ago
UBI payments have become a popular way for states to help support residents still struggling financially from the pandemic and ... MORE

1 day ago
Jon Callahan admires his marijuana plants.  There are thousands of them lined neatly in a row. “We’ve got to baby ... MORE

1 day ago
Michelle Casey saw this day coming, but she says that doesn’t make it any easier. “I’m completely devastated and it ... MORE

1 day ago
The Ontario County Sheriff’s Office provided an update on a fatal crash that happened at the intersection of State Route ... MORE