Once upon a time, Congressman John Katko considered Donald Trump as a divisive but necessary fixture in American politics, but that belief recently changed, causing him to cut ties with the disgraced leader in only a matter of a few months — just after voting for him in 2020 following an attempted insurrection and second impeachment trial.

It was less than three weeks before Election Day, but his position suddenly shifted. 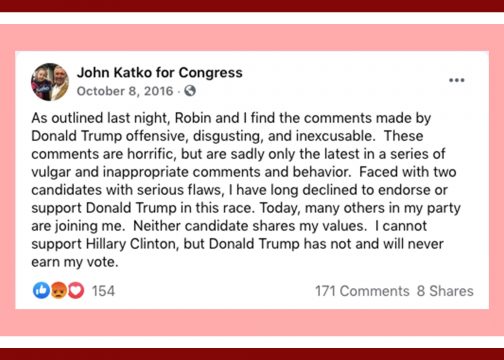 That’s when he described the bankrupted multi-billionaire real estate mogul’s comments as “offensive, disgusting and inexcusable,” insisting that he could not support Democratic Party presidential candidate Hillary Clinton, but Trump “has not and will never earn my vote.”

Four years later, Katko turned around, backing Trump and his 2020 presidential reelection bid, telling FingerLakes1.com in mid-October as a part of the Race in the 24th candidate series that “if this were a popularity contest or a nice guy contest, obviously, we wouldn’t be voting for the president, but that’s not the standard. The standard is what’s gonna be best for the country moving forward.”

This last cycle, the fourth-term congressman faced a fierce challenge in a 2018 midterm rematch against Dana Balter, a centrist Democrat, who closely tied strings between Katko and Trump — so much so, that a Siena College Poll showed her leading by two percentage points.

Like America’s favorite pastime, Katko believes that he “calls balls and strikes.” “When I’m with the President, I tell you, and when I’m not, I tell you. I call him out routinely on things, and it’s not like I have some blanket support of the President, far from it,” he explained.

Three weeks later, Katko crushed Balter in the least contentious race of his congressional career, which started in 2014. He beat her by 10.1-percent, amassing a mound of votes: 182,567 to be exact — against her 147,638 ballots.

Little did he know, however, his record of bipartisanship would be put to the test on Jan. 6, 2021.

In insurrection occurred at the nation’s capital, and that changed everything for Katko.

For months, Katko kept clamoring that he’s “not in anyone’s back pocket,” especially Trump’s own, saying that “I’ve stood up against President Trump time and time again.”

On the dark Tuesday eve before an unprecedented second presidential impeachment on Jan. 13, Katko kept his promises inside the House chambers on Capitol Hill.

He proved his worth by becoming the first House Republican to announce that he’ll impeach Trump for a second-time just six days after the infamous assault on the U.S. Capitol. The newly-appointed ranking Republican on the Homeland Security Committee repudiated the heinous acts of self-proclaimed patriots.

As a Member of Congress, the Republican from the 24th Congressional District took an oath to uphold the U.S. Constitution, a 232-year-old piece of parchment is still worth protecting “because at times it needs defending.” January 6, 2021, was one of those times.

“Just as the Capitol Police protected us, Congress must match that courage and protect the Constitution,” Katko demanded.

He stood behind a table that ended just below his waist with a baby blue surgical mask across his face. Speaking through the mask with poise and conviction, his voice muffled while condemning the treacherous deeds of insurrectionists.

As for the former president’s role in the Capitol riot, it’s simply “undeniable” in the eyes’ of Katko, claiming that Trump “deliberately promoted baseless theories, creating a combustible environment of misinformation and division.”

“To allow the president of the United States to incite this attack without consequences is a direct threat to the future of this democracy,” Katko exclaimed while his voice echoed from the congressional floor.

The traditional moderate Republican, had been consistently ranked by the Lugar Center’s McCourt Bipartisan Index as one of the most bipartisan representatives in all of Congress.

Dan Diller, the director of policy at the Lugar Center, served for ten-years as the legislative director for Senator Richard Lugar [R-IA], which bears the name of the Center that was founded in 2013.

One year later, Katko had been elected to serve his first-term, and left an unforgettable impression with the Center.

The McCourt’s Bipartisan Index essentially measures the frequency with which a member of Congress cosponsors bills introduced by the other party, and how often their own bills are cosponsored by members of the opposite party.

With 28-years of congressional data compiled as far back as 1993, federal representatives are judged against historical trends of bipartisanship.

If a representative scores a zero, they’re at the statistical average of that 28-year historical trend. Whereas congressional reps. can rise above or fall below that same average as well.

“This allows us not just to rank current Congress, but it also allows us to see patterns from Congress to Congress,” Diller explained.

In the case of Katko, “he’s consistently a higher-ranking performer,” based on their data, according to Diller. “He’s doing it because he’s interested in governing,” he added.

This previous session during the 116th Congress First Session, Katko had been ranked second-overall with a score of 3.47 last year, only behind Rep. Brian Fitzpatrick [R-PA] who earned a rating of 5.38.

Washington witnessed what Diller called the “Trump effect,” which stimulated “a partisan era of politics,” especially during the 116th Congress in the nation’s capital. The majority of congressional representatives overwhelmingly scored below the historical average — including Katko.

“I live, breathe and eat bipartisanship because I think that’s what we really need in this country,” Katko admitted in October ahead of his 2020 reelection race. “I’m not a partisan flame thrower. I am the exact opposite, I’m a bridge builder.”

Even now, his bipartisan record continues to grow, after recently joining Democrats along a party-line vote for the Equality Act, only being one of three Republicans to support that legislative endeavor.

Yet, Katko hasn’t fully escaped backlash from his own impeachment vote. Trump called-out, name-dropping Katko during his rambling speech on Sunday, Feb. 26 at CPAC 2021 in Orlando, Florida.

Two counties in upstate New York sought to censure him, too — even though one only did.

Three days after the House’s second impeachment vote, the Wayne County Conservative Party committee unanimously issued a vote of “no confidence” and censured Katko on Jan. 16, stating that “he breached the relationship” and “violated the trust” with the party, which “affirms that it shall “never in the future endorse” him “for any selected office.”

Rumblings of censure were ringing among some members of the Cayuga County Republican Committee in the neighboring Cayuga County, which failed to materialize after a recent party vote.

In the meantime, however, it’s going to be “fascinating to watch” whether “cross party cooperation will plummet” in the aftermath of the Capitol riot, according to Diller.

He asked, “Will Democrats avoid cosponsoring the bills of Republicans who voted to overturn election results?”

The inverse could be equally true, where Republicans “may feel disinclined to cooperate with Democrats,” but Diller believed that for representatives like Katko, “that’s not going to be the case.”

“There still is a pool of Republicans there, you can go to, we’ll see how it plays out,” Diller ended.

8 hours ago
Presently, there are a huge number of choices for CBD users. In the beginning, there were only products like pills ... MORE

8 hours ago
Emergency allotments in food stamps have been a life saver for millions of Americans suffering financial hardship since the pandemic ... MORE

1 hour ago
The Honeoye Falls-Lima Cougars and the Wayne Eagles faced off in the Boys Class C Semifinals at Canandaigua Academy on ... MORE

7 hours ago
Thousands of Americans will soon get gas and transit cards. The cards are being funded through the Chicago Moves program ... MORE

Free baby formula for millions- Are you eligible?

8 hours ago
The baby formula shortage continues on in America. Free formula will soon be available to eligible people to provide some ... MORE

9 hours ago
Memorial day is coming up and like most businesses, Starbucks will have modified hours. Here’s what to expect if you’re ... MORE