Home » Chance The Rapper » SWEETNESS: Syracuse on to Sweet 16 with 75-72 win over West Virginia (full coverage)

SWEETNESS: Syracuse on to Sweet 16 with 75-72 win over West Virginia (full coverage) 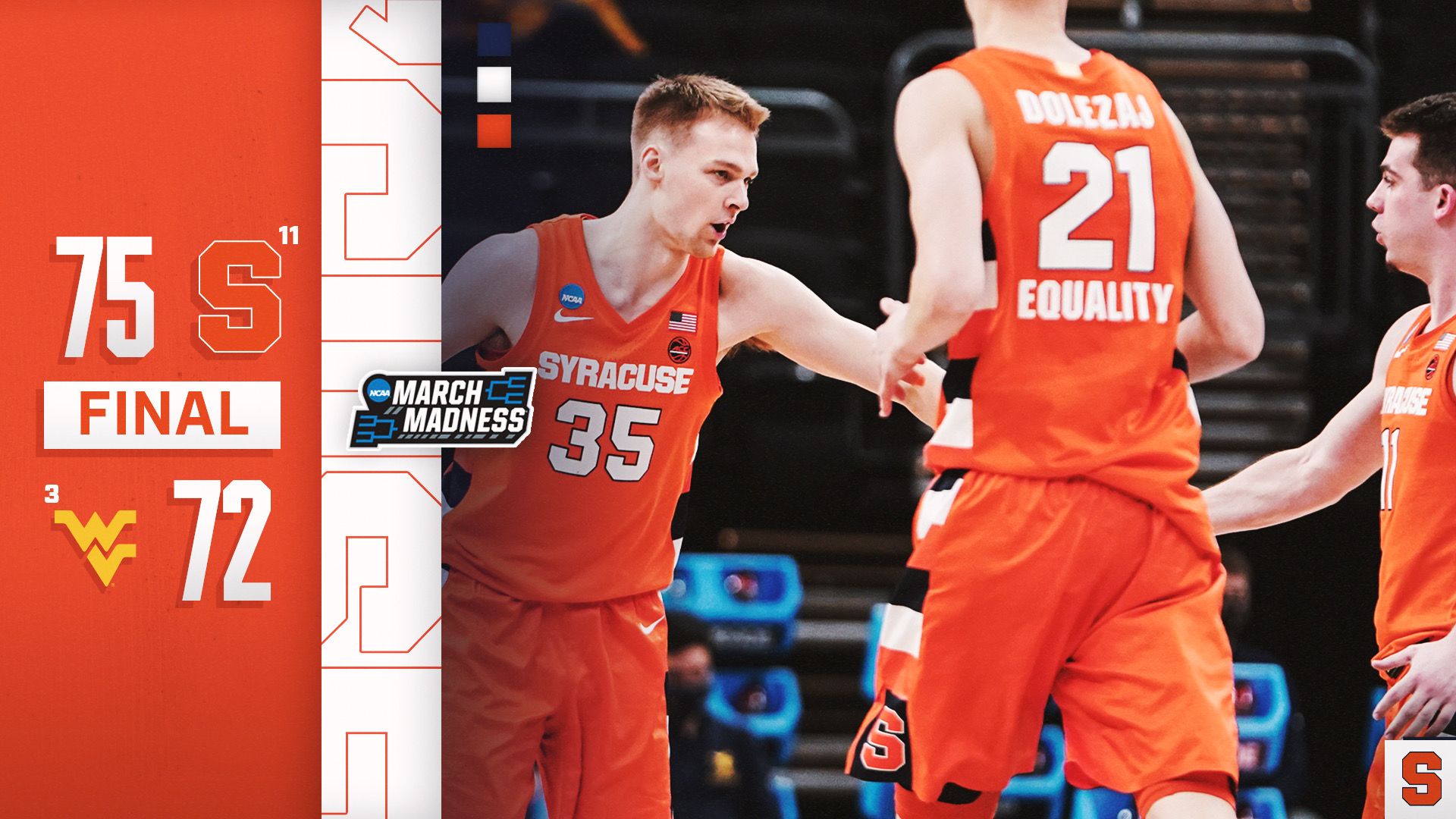 The Syracuse Orange spent the last two minutes waiting to exhale before holding onto a 75-72 win over the West Virginia Mountaineers in the second round of the NCAA tournament on Sunday.

Syracuse led 70-59 with two minutes left in the game, but things got tight in the final minutes.

The Mountaineers out-scored Syracuse 9-2 over the next minute and 20 seconds.

Syracuse had trouble inbounding the ball against West Virginia’s fullcourt press. The Orange used its last timeout with 32 seconds left.

Buddy Boeheim padded the Orange’s lead back to 74-68 with a pair of free throws with 21 seconds left.

But Joe Girard missed the front end of a one-and-one a few seconds later. West Virginia scored with 4.3 seconds left to cut the margin to 74-72.

Once again, Syracuse struggled to get the ball inbounds. Quincy Guerrier had the ball go off a West Virginia player’s foot and out of bounds.

The 11-seeded Orange now advances to the Sweet 16 where it will face either Houston or Rutgers.

? Upset San Diego St
? Upset West Virginia@Cuse_MBB is on to the Sweet 16! pic.twitter.com/JbI5nh85RA

Syracuse is the 2nd program to reach the Sweet 16 3 or more times as a double digit seed, joining Gonzaga, which has done it 4 times.

Jim Boeheim is the 3rd coach to reach 3 Sweet 16s as a double digit seed, joining Mark Few and Tom Penders (3 each). pic.twitter.com/5mkucMjpOd

The 11th-seeded Orange are back to the Sweet 16 for the third time in the last five NCAA tourneys. Jim Boeheim just clinched his 20th Sweet 16. Nearly half of his coaching seasons (45) have resulted in at least a S16 appearance. Never a losing season. Remarkable consistency.

Sweet 16‼️ so proud of these guys, no better feeling than wearing this jersey. ❤️???

SYRACUSE IS GOING TO THE SWEET 16

Is that SWEET tea? ? pic.twitter.com/xkrKQYGLFy

jIm BoEhEiM iS WaShEd AnD nEeDs To ReTiRe ???

Buddy Boeheim at the post-game podium:

"I can't even describe it, it's something I wanted my whole life"@CNYCentral pic.twitter.com/Zqx21ETqtt

Like we said… It’s ‘Cuse in March ?‍♂️ pic.twitter.com/0RAdii4fGC

You can breathe now, #OrangeNation

The Orange look to advance to the Sweet Sixteen on Sunday when it faces third-seeded West Virginia in the second round of the 2021 NCAA Men’s Basketball Tournament. Tip off from Bankers Life Fieldhouse is scheduled for 5:15 p.m.

The 11th-seeded Orange scored a first-round victory against San Diego State on Friday evening behind 30 points from Buddy Boeheim. The Fayetteville, N.Y. native’s scoring total was the most in a tournament game by a Syracuse player since 2010, when Wes Johnson tallied 31 points in a second-round triumph against Gonzaga.

In its first-round contest on Friday, West Virginia claimed an 84-67 victory against Morehead State behind 30 points from sophomore guard Deuce McBride. The Mountaineers enter the contest ranked 13th in the nation with a 19-9 overall record.

Syracuse is 34-16 in the all-time series against West Virginia and has won the last five contests against the Mountaineers. The teams were formerly conference mates in the BIG EAST from 1995-2012 and met twice at Madison Square Garden in the BIG EAST Tournament, with the Orange claiming victory in both contests.

The game will mark the second time in NCAA Tournament history where the two participating coaches will each have 900 career victories. The first instance came in 2018, when Jim Boeheim and Syracuse faced off against Mike Krzyzewski’s Duke in the Sweet Sixteen.

Across six Syracuse-West Virginia games in which Boeheim and Huggins manned the sidelines, the Orange hold a 5-1 advantage.