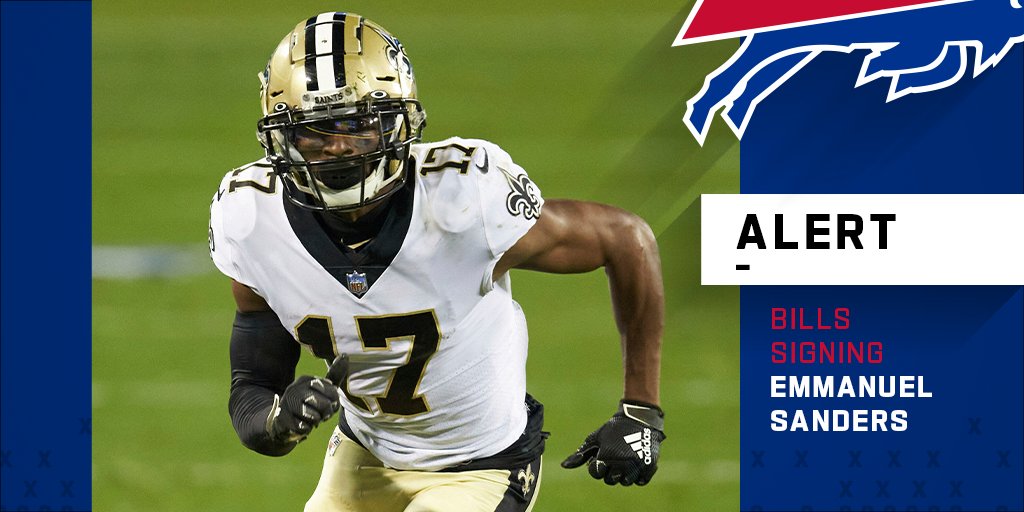 The Buffalo Bills have agreed to terms on a one-year deal with veteran wideout Emmanuel Sanders, NFL Network’s Tom Pelissero reported Tuesday, per an informed source. Pelissero reported earlier in the day that the two sides were engaged in serious talks.

The #Bills have agreed to terms with WR Emmanuel Sanders on a one-year deal, per source. Once released by the #Saints, he's slated to fly to Buffalo on Thursday to take a physical and finalize the deal.

Dan Fete of 13WHAM ABC first reported the team is engaged in discussions with Sanders.

Breaking: Per source, the Buffalo #Bills are set to sign WR Emmanuel Sanders

Although the Saints announced Tuesday afternoon that his contract has been terminated, Sanders has not yet been officially released; that’s expected to happen sometime after 4 p.m. Wednesday for cap reasons, Pelissero noted. Once official, Sanders is slated to fly to Buffalo on Thursday to take a physical and finalize the deal, he added. News of Sanders’ release was initially reported on March 10.

Joining Buffalo’s exciting offense is yet another ideal free agency decision for Sanders, who turns 34 Wednesday. He inked a two-year deal with the Saints last offseason, and went on to contribute 61 receptions for 726 yards and five touchdowns.

After spending multiple seasons with the Steelers and Broncos during his first 10 years in the NFL, Sanders has become somewhat of a hired hand the last two years. Denver traded him to the 49ers midway through the 2019 season, bolstering San Francisco’s WR corps en route to a Super Bowl LIV run.