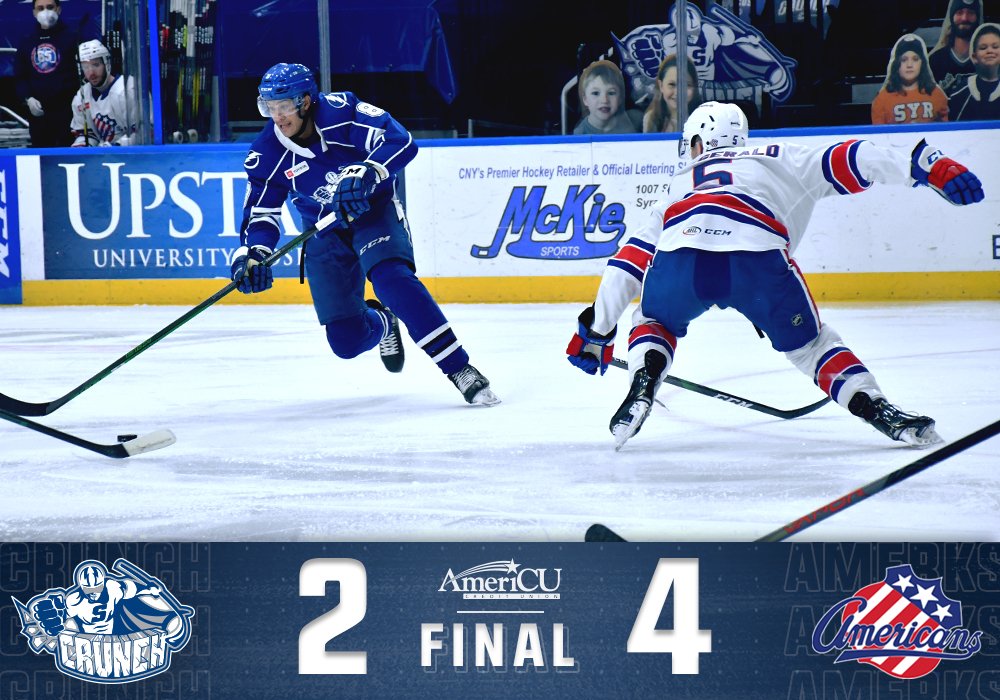 A second-period surge and a three-point night from leading point-getter Jean-Sebastien Dea would solidify the Rochester Americans’ (6-3-0-0) sixth win of the year and third over the Syracuse Crunch (2-5-1-0) in a 4-2 victory over their North Division rivals Saturday at Upstate University Medical Arena.

The contest was the first of two consecutive road games as well as the fourth of 12 scheduled meetings against the Crunch this season. With the win tonight, the Amerks push their record to 15-8-1-1 in their last 25 games against their North Division foe.

Captain Steven Fogarty (1+0) notched his fifth goal of the year – and fourth on the power-play – in just nine games, a mark that just last season took him 20 games to reach. The veteran forward is now tied for the league lead in power-play goals this season with Cleveland’s Trey Fix-Wolansky and Utica’s Kole Lind.

Dea (1+2) tallied his fourth multi-point effort of the campaign with a pair of assists and a late goal, making him the first Amerk to reach double digits points in 2020-21 and moving him into five-way tie for second in the league in scoring with 12 points through his first eight games. More impressively, Dea has recorded at least one point in all but one game so far this season, including opening the campaign with three straight multi-point effort for this first time in his seven-year pro career.

Forwards Andrew Oglevie (1+0) and Arttu Ruotsalainen(1+0) both notched their third goals of the season, respectively, while Jack Quinn (0+1) and defensemen Casey Fitzgerald (0+1) and Mattias Samuelsson (0+2) each added assists on the night.

For the second consecutive game, goaltender Ukko-Pekka Luukkonen (5-2-0) recorded a win for his fifth of the season while stopping 27 of the 29 shots he faced. The Finnish netminder is now tied for third in the AHL in wins and has made 30 or more saves in four of his last six appearances dating back to a career-best 43-save performance at Cleveland on Feb. 12.

The two Crunch tallies were recorded by Serron Noel (1+0) and Taylor Raddysh (1+0), both of which were on the man-advantage. Forwards Peter Abbandonato (0+1), Jimmy Huntington, former Amerk Scott Wilson (0+1) (0+1) and defenseman John Ludvig (0+1) all added the helpers throughout the course of the contest.