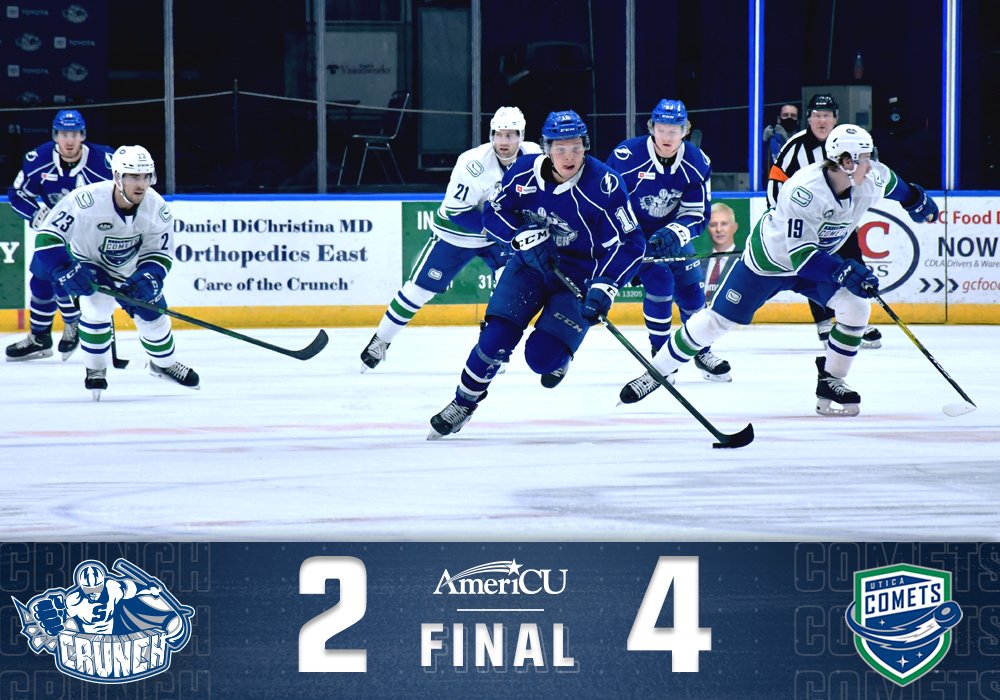 The Syracuse Crunch were downed by the Utica Comets, 4-2, tonight at the Upstate Medical University Arena.

Utica jumped out to a quick two-goal lead that Syracuse was unable to overcome. The team came back within one on two separate occasions off goals from Otto Somppi and Ryan Lohin, but eventually fell to the Comets. Syracuse is now 1-4-1-0 on the season and 1-2-0-0 in the 14-game season series against Utica.

Goaltender Sam Montembeault stopped 27-of-30 between the pipes for the Crunch. Jake Kielly earned the win turning aside 28-of-30 in net for the Comets. Utica went 1-for-5 on the power play, while Syracuse was 0-for-6.

The Comets were first on the board two minutes into the game when Vincent Arseneau skated in down the left side and fired in a wrister. Utica doubled their lead at 8:42 while on the power play. Kole Lind got a stick on Mitch Reinke’s right point shot to redirect it past Montembeault.

The Crunch stole one back with five minutes remaining in the opening frame. Gage Goncalves threw a centering pass for Somppi to sweep in from the slot.

Utica regained their two-goal lead at the 13:01 mark of the second period when the team capitalized on a giveaway in the trapezoid. Montembeault got caught behind the net leaving Arseneau an open cage.

Syracuse quickly responded with a goal of their own three minutes later. Brady Keeper’s long-range shot was stopped, but Lohin was parked in front to clean up the rebound.

The Comets added an empty-netter in the final minute to secure their second consecutive win against the Crunch.

The Crunch host the Rochester Americans this Monday at 4 p.m.