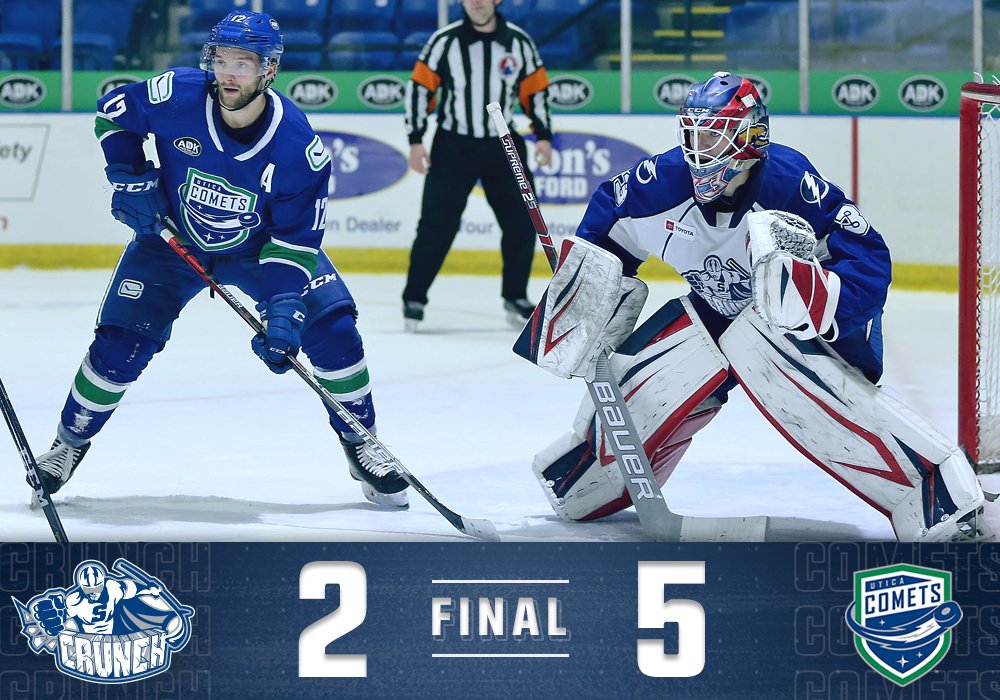 The Syracuse Crunch were downed by the Utica Comets, 5-2, tonight at the Adirondack Bank Center.

Despite the loss, the night featured a series of firsts for the Crunch including Jimmy Huntington’s first AHL goal, Dmitry Semykin’s first pro goal and Declan McDonell and Cole Schwindt’s pro debuts.

Goaltender Sam Montembeault turned aside 15-of-20 shots in his fourth consecutive start for the Crunch. Jon Gillies stopped 17-of-19 in net for the Comets. Both teams went 1-for-4 on the power play.

The Comets were first on the board with a goal at the 14:50 mark of the first period. Jonah Gadjovich was in front of the net to redirect a centering feed from Will Lockwood.

Utica continued to build a lead with two more in the middle frame. Steven Santini sent home a long range shot halfway through the period followed by a power-play marker from Nathan Walker four minutes later.

Dakota Joshua made it 4-0 for the Comets four minutes into the third period when he rushed down the right side, cut across the slot and stuffed the puck behind Montembeault.

The Crunch were unable to mount a comeback and the Comets hit the empty net in the final minute to take a 5-2 win.

The Crunch return home to host the Rochester Americans Saturday at 7 p.m.

This one is just the first ?

And his first pro point with an assist tonight. pic.twitter.com/PMXV6bvBTv