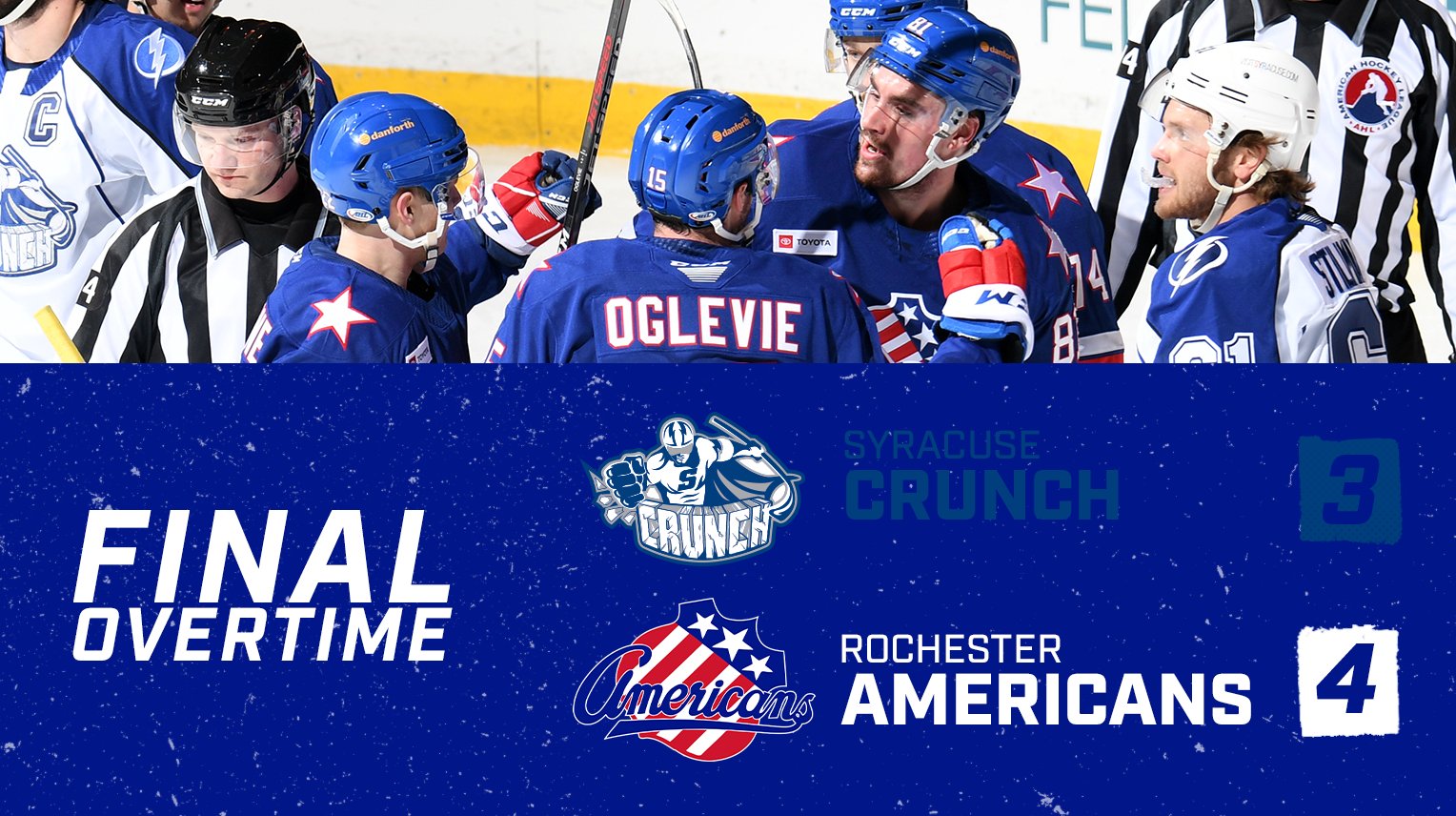 The Syracuse Crunch rallied back from a three-goal deficit to force overtime, but fell to the Rochester Americans in the extra frame, 4-3, tonight at the Blue Cross Arena.

Boris Katchouk, Ross Colton and Taylor Raddysh each found the back of the net to tie the game and help the team collect a point while on the road. The Crunch are now 1-0-1-0 on the season.

Sam Montembeault stopped 22-of-26 between the pipes for Syracuse. Ukko-Pekka Luukkonen turned aside 20-of-23 in net for the Amerks. Syracuse was unable to convert on their single power-play opportunity, while Rochester went 2-for-3.

The Amerks opened scoring 1:48 into the game when Remi Elie redirected Oskari Laaksonen’s right point shot. Brett Murray doubled the lead on the man-advantage late in the first period by shoveling in a rebound in front of the net.

Rochester made it 3-0 less than two minutes into the middle frame. Elie tipped another Laaksonen wrister from the top of the right circle while Montembeault was screened.

The Crunch finally got on the board at the 4:25 mark. Aleksi Heponiemi’s sharp-angle shot trickled past Luukkonen for Katchouk to shove over the goal line.

Just 26 seconds into the third period, Syracuse pulled within one. Riley Stillman sent a cross-zone feed down to Colton on the backdoor. He controlled it with his skate and chipped it in. Raddysh then knotted the score at 11:50 when Heponiemi set him up to beat Luukkonen with a breakaway.

Despite the comeback, Rochester still took the win off a Steven Fogarty one-timer while on the power play in the overtime frame.

The Crunch return home to host the Wilkes-Barre/Scranton Penguins on Saturday. The Amerks hit the road to take on the Cleveland Monsters on Friday.

We rallied back from a 3-0 deficit to force overtime and pick up a point against the Amerks. #SYRvsROC

First win for the crew behind the bench. ?#UnitedWeROC pic.twitter.com/AK0dg36imW