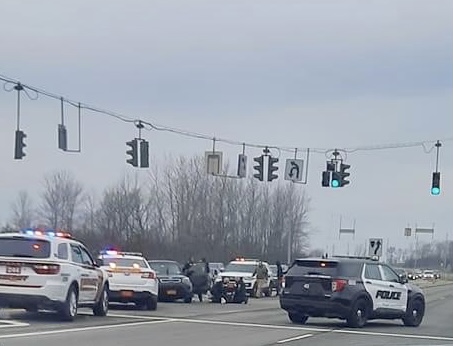 Photo shared from the scene on Rt. 332 on Saturday after the second pursuit came to an end.

Sheriff Kevin Henderson says his deputies were involved in two high speed pursuits along Route 332 between Canandaigua and Farmington on Saturday.

On Saturday a little before noon deputies began investigating a violation of an order of protection that started in the town of Hopewell.

The victim reported that the suspect was following her in a vehicle and wouldn’t leave her alone. As result, deputies attempted to initiate a traffic stop on the vehicle, which was operated by Leporia Logins, 24, of Sodus.

Deputies say Logins failed to comply and led officers on a high speed pursuit from the city of Canandaigua into the town of Farmington on State Route 332.


For safety reasons deputies terminated the pursuit at County Road 41. A short time later, a New York State Police Officer observed the vehicle southbound on Route 332 near the Thruway and attempted a traffic stop.

The vehicle again failed to comply and fled south on Route 332 into the town of Canandaigua. Deputies joined in the pursuit a second time, but were told to terminate it as it approached County Road 8 due to safety concerns.

The suspect vehicle continued south and ended up colliding with two vehicles that were stopped for a red light at County Road 8. Deputies say the suspect’s vehicle was disabled and three people were taken into custody without further incident.

No injuries were reported, according to deputies.

Leporia was charged with felony aggravated family offense, and a total of 19 traffic violations including reckless driving and speeding. The driver in the second pursuit, after an apparent switch after the initial incident, was identified as Michael White, 24, of Rochester. He was charged with felony reckless endangerment and 15 traffic violations.

A third person was issued an appearance ticket in the incident for possession of marijuana.