Ed and Jean Nelson have been a unified staple in the Waterloo community for decades. On Tuesday they celebrated a monumental milestone.

It’s difficult to put that amount of time into perspective. It would be even more difficult to define it by a few, or even one characteristic. But for Ed and Jean, their anniversary milestone and lifelong support of the community they call home can be summed up in one word: Unwavering.


Ed was born in 1924 in Barre, Vermont and graduated from Mynderse Academy. He attended Syracuse University after spending three years in the U.S. Navy. Jean was born in 1925 in Phelps, and graduated from Mynderse a year sooner than Ed. They met in school and attended the same church. The two would tie the knot on December 1st, 1945. It was a wedding that took just two weeks to plan after Ed returned home from the war.

Ed and Jean are members of the Waterloo Baptist Church and Gideons International. They traveled a lot for Gideons, which stands out as some of their fondest memories and proudest work. They raised five children, have 16 grandchildren, and 32 great grandchildren.

For many in the Waterloo-area Ed and Jean were known for their work in the community. They helped start the Real Christmas Celebration in Waterloo, and were celebrated in 2019 for years of hard work and participation.

The first business they were involved in was Pulaski Wood and Supply Company, Inc. That company would move part of its operation to Waterloo in 1952, operating a small sawmill business until a fire in 1969. Taking that moment in stride, the two operated one of Waterloo’s most-identifiable businesses.

The Ye Olde Wood Shoppe Village was opened in 1969 and managed by Jean. It expanded as their family grew — incorporating their children and a bevy of other shops. Through the 1970s and 1980s the Ye Olde Barn, Candy Shoppe, Wood Shedd, Clock Shoppe, Doughnut Shoppe, Craft House, Feedbag Restaurant, Sawmill, Woodworkers Paradise, Timber Harvester Sawmills and Harvester Home Center all would be added. As the businesses grew, so did their role in the community. The Shoppe would operate for nearly 40 years in the village under the Nelson’s careful watch.

Ed would serve as a member of the Seneca County Board of Supervisors from 1980-1989. Both Ed and Jean worked to promote the Finger Lakes Regional Airport, as well as the Seaweed Harvesting Industry in their early-days. They were also members of the Finger Lakes Association, which promoted business growth throughout the entire region. 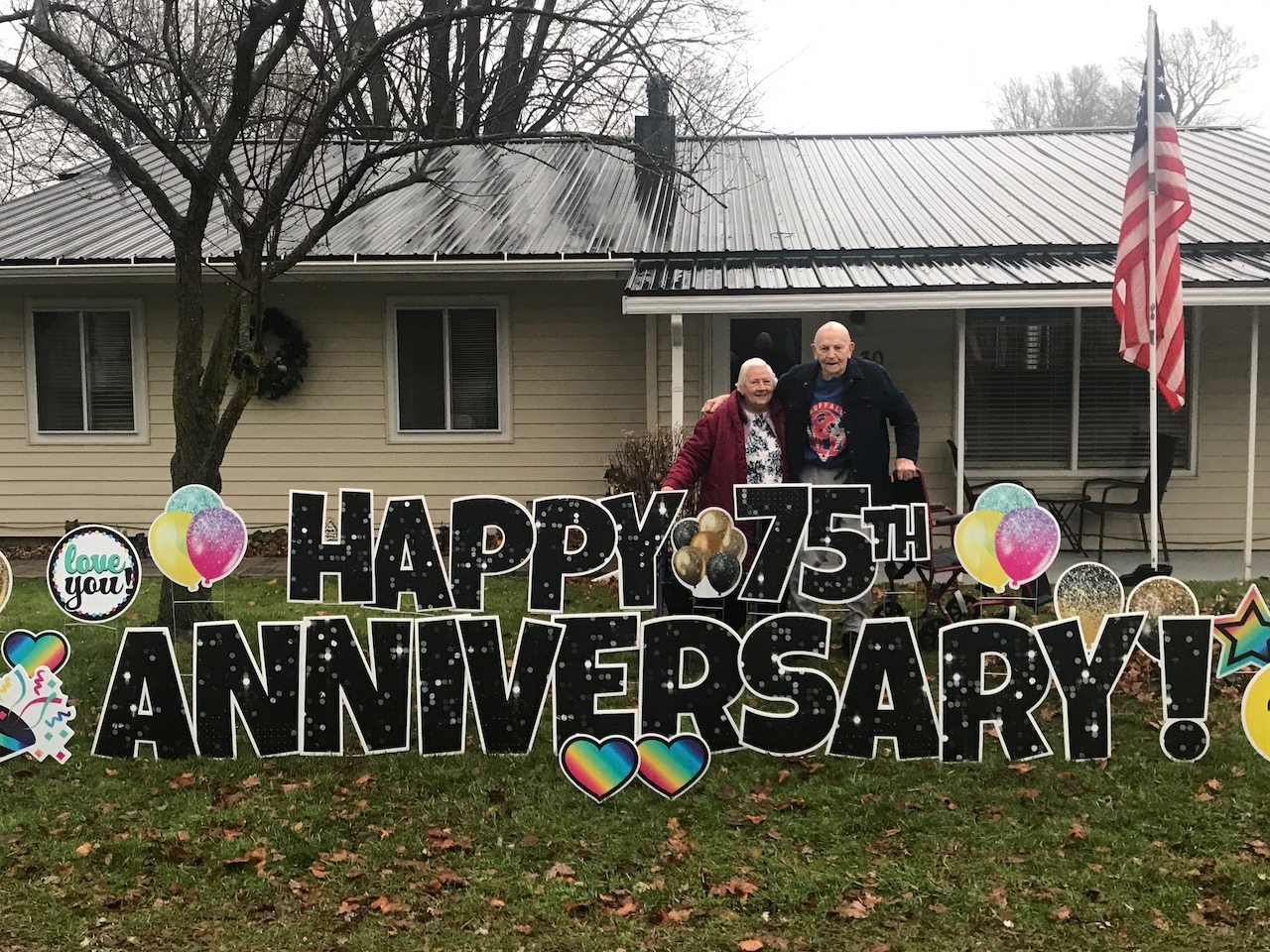 The Nelson’s front lawn was decorated to celebrate the moment they reached 75 years of marriage. The yard sign was produced by a Geneva company called Yard Card Fairy.

Under ordinary circumstances, a celebration of a 75th wedding anniversary would look different. That said, 2020 has been anything but ordinary. So fitting of the year family, friends, and community came together in a different way — decorating their lawn on N. Walnut Street to celebrate the milestone.

Everyone was inspired by the moment and effort. It was particularly special for granddaughter Ehren, who connected with us to make this story possible. She and husband Mike will welcome Ed and Jean’s 33rd great grandchild in a few short months.

Their advice for a healthy and happy marriage was summed up in a few words the two have carried throughout 75 years of marriage. “Love the Lord and love each other,” Ed and Jean said, reflecting on 75 years of memories. It’s what they have done throughout their journey and how they will spend every day as they look forward to celebrating more milestones in the years to come.

Editor’s Note: Ed and Jean shared their gratitude for the cards and letters sent to them as their anniversary approached. The yard display can be viewed at 30 N. Walnut Street in Waterloo. 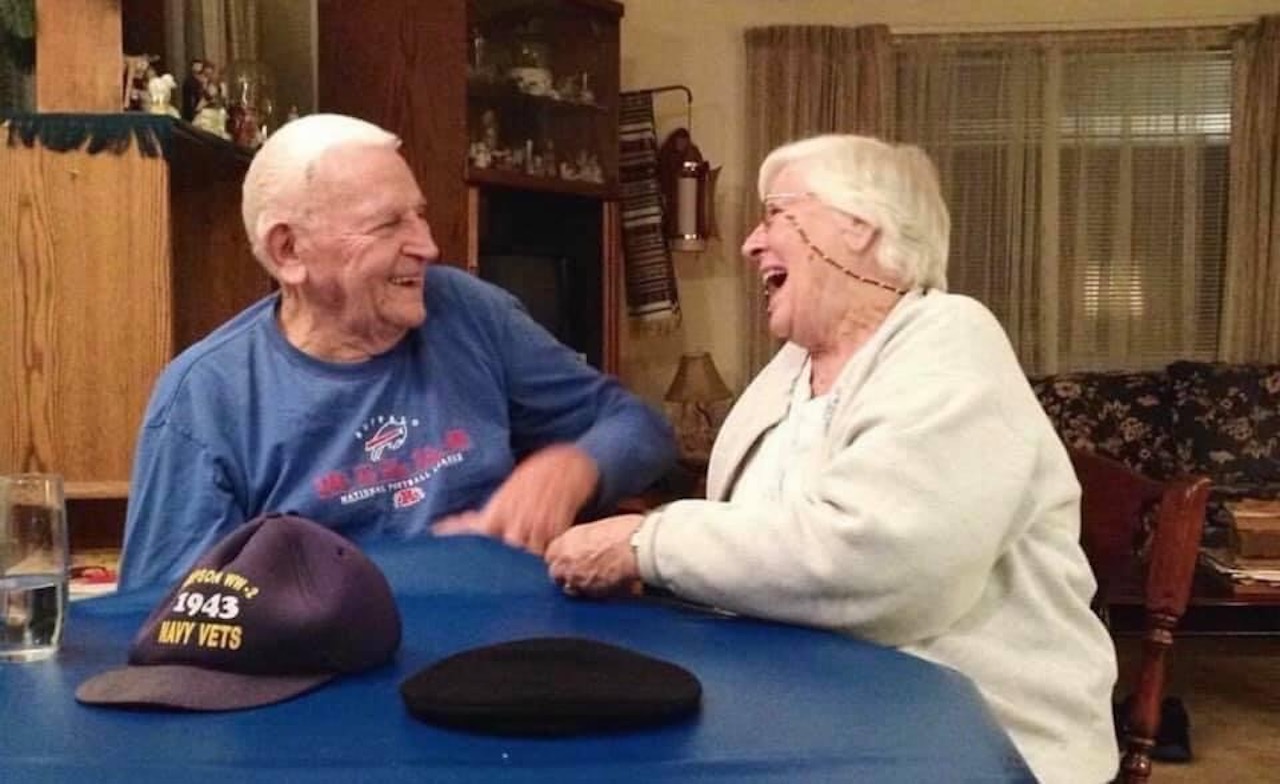