Home » Valentine's Day » Hospital data, capacity will play major role in ‘Winter Plan’ for COVID-19 in NY: Here’s what else will happen

Hospital data, capacity will play major role in ‘Winter Plan’ for COVID-19 in NY: Here’s what else will happen

On Monday, Governor Andrew Cuomo announced the components and metrics that will be used to determine the state’s response to the Coronavirus Pandemic during its ‘Winter Phase’.

Cases have been surging in recent days, and with the holiday season here — state leaders are concerned that there will be a ‘spike on top of a spike’, which is sentiment echoed by CDC leaders.


The state’s positive rate in focus areas (which includes Monroe and Onondaga counties) was 6.2%, with a statewide positivity rate of 4.02% without them. Altogether it brought the positivity rate to 4.57%. There were 54 deaths reported in the last 24 hours, and 160 new hospitalizations, as well as 14 new admissions to ICU beds.

Hospitals were a big component of the ‘Winter Phase’ response plan. Here’s a look at how this shapes up. 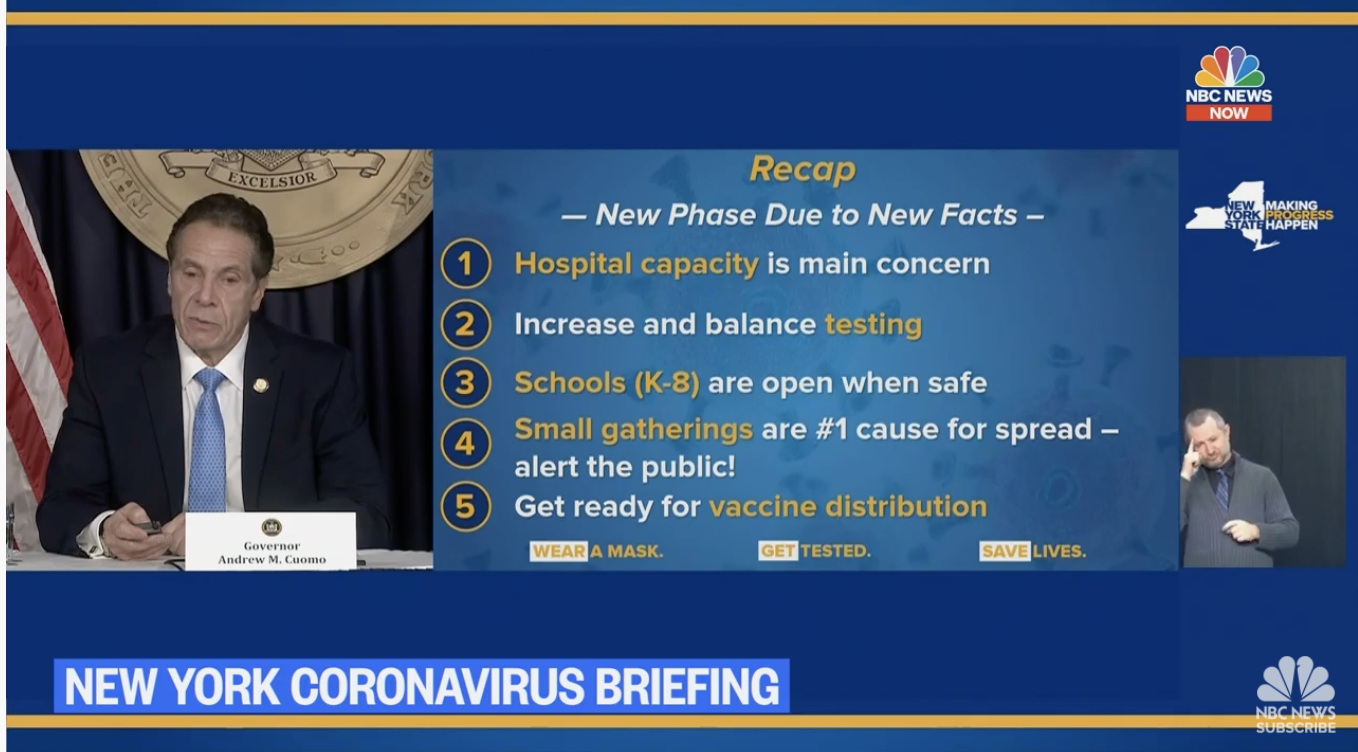 During the briefing Cuomo said he expects it to take 7-10 days for the specifics to be released on this front Partly because of the lag in infections post-Thanksgiving gatherings. He said state leaders will also meet with hospital administrators in the coming days to get an understanding of the data and forecast.

For hospitals, here is what Governor Coumo says they will be expected to do:

A hospital capacity emergency tracking system will be launched in the coming days.

All arms of government in the state will be working to increase gross testing, and simultaneously balance distribution. This includes healthcare workers, nursing homes, schools, essential workers, business professionals, personal services testing, and general population of students returning or traveling.

“There’s not enough tests to go around – I get it,” Cuomo said. “But we have to be fair about distribution.”

“All of the experts say schools are safer than the surrounding communities,” Cuomo said. Testing focus will be on schools that fall into various zones, and will be amplified as necessary. Pool testing will be allowed, and testing out will still be permitted. School districts will be allowed to exceed the 20% testing requirement, but the surrounding community will have to maintain all other mandated testing levels for nursing homes, essential workers, and other important groups simultaneously.

“We have a mandatory close level for school districts – and they can close at lower levels, but our advice is that you don’t,” Cuomo said. “We believe in keeping – especially K-8 open.”

Governor Cuomo called the impact small gatherings are having on virus transmission a ‘dramatic shift’ from the early days of the Coronavirus Pandemic. It now accounts for 65% of total transmission of the virus. “It’s an adaptation of social behavior to circumstance,” Cuomo said. He outlined a number of other states that have the 10 or fewer rule in place. “This is a nationwide problem. I understand the people say they have COVID fatigue. The truth is that Government doesn’t have the ability to monitor [your home],” but it’s a matter of public health and safety that people do not gather at home, or elsewhere. “We have to communicate this to people the same way we communicated mask-wearing.”

A new media campaign will begin in the coming days to drive this home point. The Governor spoke to the fact that it’s not political – both Republicans and Democrats agree that small gatherings should not be happening.

Vaccine delivery could start in the next few weeks. The process will be built around fairness, equity, and safety. Governor Cuomo says it will be an inclusive process that includes outreach to Black, Brown, and poor communities. “Vaccine critical mass is still months away. Until it reaches there operate at maximum possible level that is safe,” he said. “You’ll continue to see these numbers increase, probably until mid-January. You have not yet seen the effects of Thanksgiving. You’ll see the effects a week out from today. I expect those numbers to keep going up. I would say you start to see a stabilization in mid-January, at an increased rate from the holiday season. The rate will be much higher than it is today. You won’t see a real end until the vaccine hits critical mass.”

Cuomo says that won’t be until late-spring or early-summer in 2021. “New York is doing better than almost any other state by the numbers. New York is better prepared than any other state. And it’s all in our control,” he added. “This is all a function of human behavior, social action, and social patterns.”


Watch the briefing below: