Just one week after President-elect Joe Biden and Vice President-elect Kamala Harris were announced as the projected winners of the 2020 presidential election, thousands of demonstrators took to the streets of Washington, D.C. for the ‘Million MAGA March’ on Saturday, November 14th.

The ‘March for Trump,’ which had been organized by Women for America First captured the nation’s attention while Trump supporters in the thousands came in droves from all across America: Arizona, Texas, Pennsylvania, Georgia, Colorado, Florida and Maryland, just to name a few. 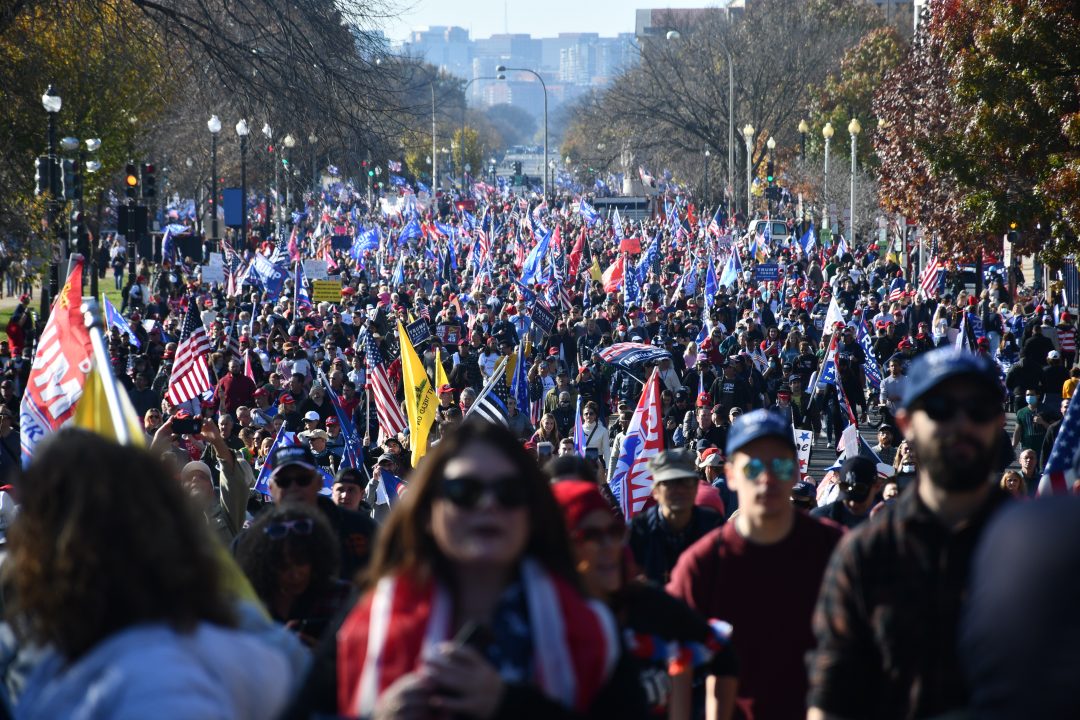 Last week, several national news outlets including the Associated Press, CNN and Fox News called the race for the White House in favor of Biden and Harris four days after Election Day on Saturday, Nov. 7.

In response to the projected results, demonstrators coined a new chant: “Stop the Steal,” a phrase that kept reverberating throughout the entire day.

And those in attendance did not hide their disdain for “mainstream, corporate media,” as verbalized by the roaring crowds that flooded the streets and filed their way to Freedom Plaza, which is only a few blocks away from the U.S. Capitol.

Tracy Beanz, the editor in chief of Uncover DC, spoke at the rally in Freedom Plaza, issuing a call to support “independent media,” claiming that the role of the Fourth Estate has “gone by the wayside” and that her news organization does “actual journalism.”

“Support independent journalists. Support the president and his family. Support transparency and integrity in our election,” Beanz shouted from the platform stage.

Shortly after, chants of “CNN sucks” and “Fox News sucks” chillingly echoed while flags of all sorts flew in the fall breeze. 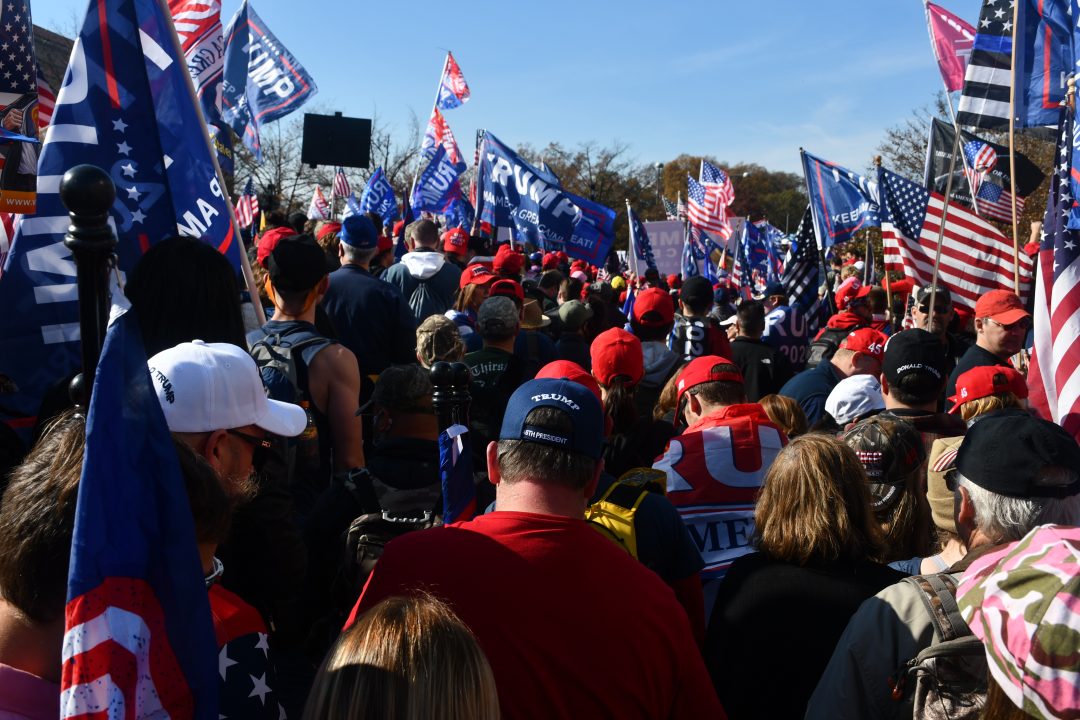 Later that same day, Jack Posobiec, an One American News Network correspondent spoke at the Supreme Court, blasting media companies in front of a fervor-packed crowd.

“You are here in defiance of the mainstream media,” he expressed.

Aside from alleging that the mainstream media is calling conservatives names and acting out of bias, Posobiec claims that “they say you do not exist,” which is the single-worst offense that any media outlet can perpetrate.

But after rallying in Freedom Plaza, the song “Y.M.C.A.” played through the sound system, demonstrators disembarked from Freedom Plaza on their march through the streets past the U.S. Capitol and toward the Supreme Court.

Although crowds continued climbing Capitol Hill, a controversial conservative figure started walking back down the hillside while being flanked by Proud Boys from all different angles.

The Proud Boys has been characterized by the Southern Poverty Law Center, a prominent legal advocacy organization, as an “anti-governmental militia,” calling their movement as a hate group.

Alex Jones, the owner of InfoWars, made an appearance in Washington while visiting the nation’s capital as a part of the ‘Million MAGA March’ and had been escorted by the Proud Boys back to his hotel, which was located nearby. 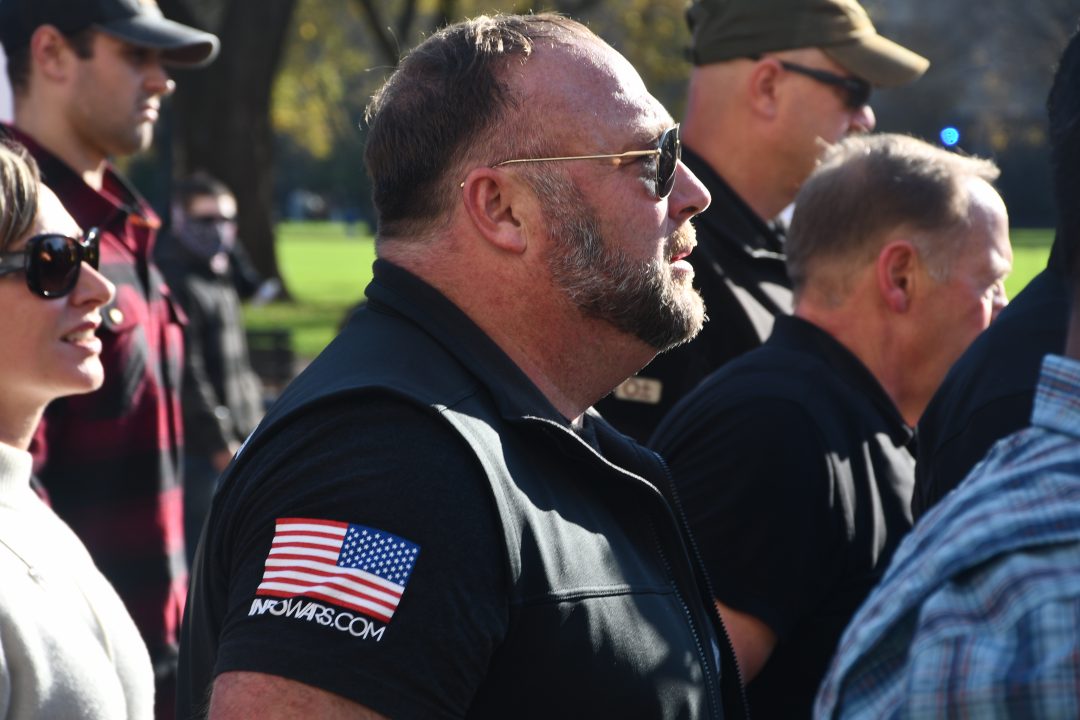 InfoWars’ Alex Jones walks beside the Proud Boys and his followers through the streets of Washington while returning back to his hotel.

Just this summer, the Connecticut Supreme Court denied Jones’ request to postpone a defamation case after claiming that the 2012 Sandy Hook shooting massacre was a hoax, which has been the latest of a series of legal battles that he has faced due to his controversial comments and propagation of several unfounded conspiracy theories.

Among the thousands in support of Trump was Chris Cane, who resides in San Antonio, Texas. He left Wednesday evening from the Lone Star state and drove all the way to Washington, arriving just in time for festivities by Saturday to meet a friend who lives in the DMV area.

In 2016, Cane didn’t vote for Trump or Democratic Party presidential nominee Hillary Clinton saying, “I couldn’t bring myself to vote for either one of them,” which is why he decided to vote for independents statewide. 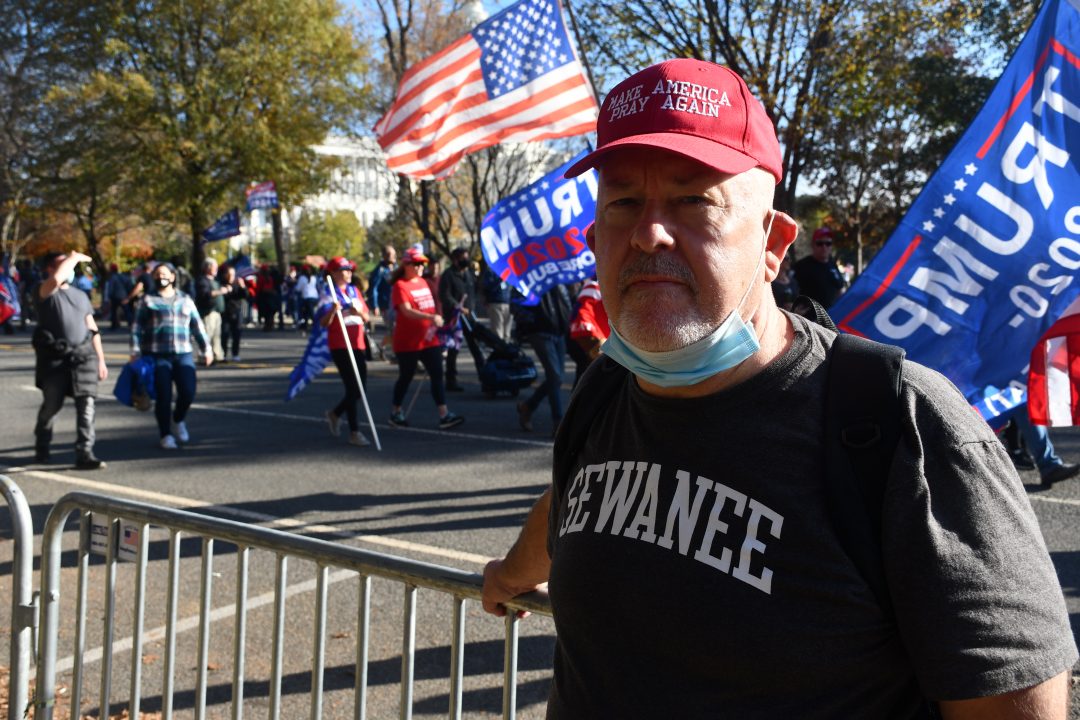 Despite not voting for Trump in 2016, the self-describing “Bible-believing Evangelical Christian” has been extremely happy with his record while sitting in the Oval Office while claiming, “I can’t think of anything that he did that I oppose.”

“I felt like we got four-years of reprieve from God,” Cane told FingerLakes1.com.

Four years later, his voting has changed, casting his ballot in favor of the current Commander in Chief, insisting that “this country can’t survive under leftist rule.”

For Cane, the political divide has been intensified between the Democratic and Republican two party system, likening it to “a war between two side, rather than a war between good and evil.”

The #Trump bridge just moved their singing mobile band stage through the streets as protesters head to Freedom Plaza. pic.twitter.com/o68e2sUGCH

Despite his own political views, Cane is still considerate about the feelings of others, and faith has informed his own actions.

When men dressed in Proud Boys regalia were shouting “F–k Antifa” through the streets, Cane called for them to stop saying the profanities while standing along a sidewalk behind a metal-fenced barricade.

He even asked for some demonstrators who carried Confederate flags to put them away for the sake of all conservatives that were in attendance, blaming the media for manipulating their coverage of actual events that occurred like on Saturday.

“I got no problem with the Confederate flags, but there are people who do, and I understand their point of view and I asked them to please put their Confederate flags away because you know what the media is going to do with that,” Cane said.

“Just don’t give them any reason to slander you. They will slander you, they will misrepresent you. That’s what they’re all about,” he added.

As for the election results, he desires for officials to “make it clear to everybody, not just these people here… make it so clear that nobody can deny” the actual outcome.

He is even willing to accept the results of this election under those pretenses, but insists that he’ll “give up on America” under a Biden administration.

Although Cane admits that COVID-19 is “a real thing,” its “overblown” and believes that a global pandemic shouldn’t “change or our lives” like Saturday’s march even though there are currently more than 246,000 COVID-related deaths nationwide and the majority of demonstrators didn’t social distance or wear any masks whatsoever.

He recalled that someone from his own church actually contracted COVID-19, claiming that they’re recovering but still hasn’t heard from them since.

“I don’t know anybody who’s died from it. I’ve heard of people die from it, but people die every year,” he insisted.

Cane mentioned that the media is contextualizing it as “a mostly peaceful protest” even though he believed that there hadn’t been any arising conflicts.

However, that statement is inaccurate after reports were made that at least one stabbing occurred and other incidents of violence spurred out, resulting in 20 arrests across the District of Columbia once crowds dispersed shortly after the “Million MAGA March” officially concluded at the steps of the Supreme Court and nightfall arrived. 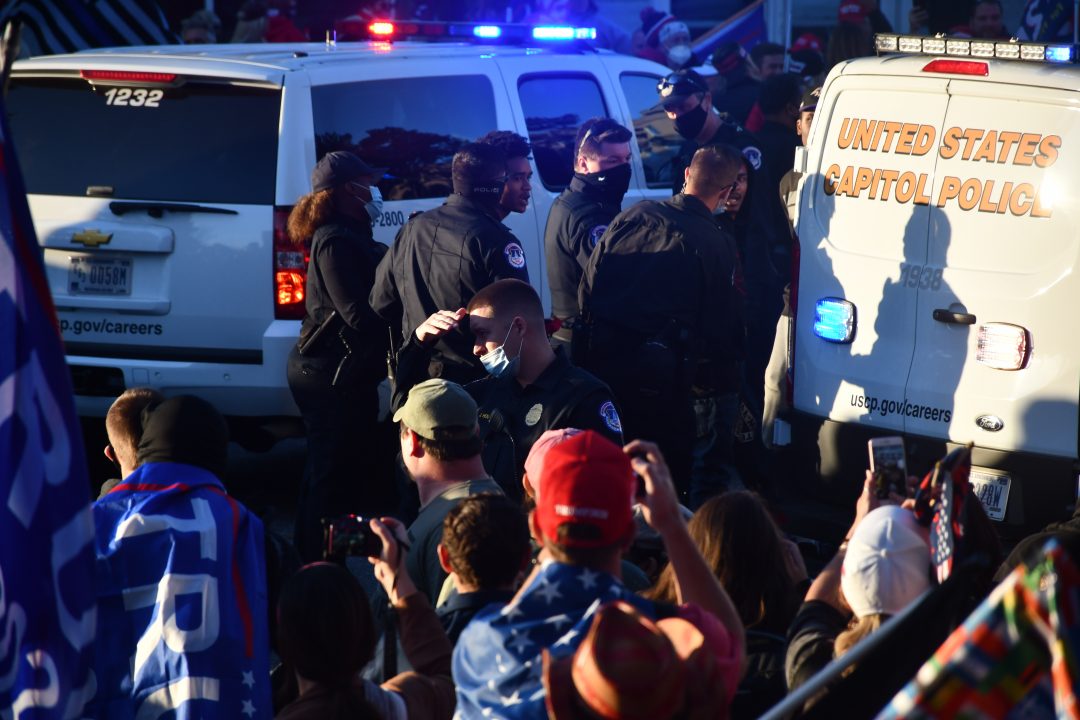 In spite of some violent outbreaks, demonstrators called for this Saturday to serve as a political rallying cry around President Trump, who trails behind Biden by more than five-million when it comes to the popular vote, even though Election Day has already passed.

The 45th president also drags in the Electoral College as well after collecting only 232 votes in comparison to Biden securing 290 votes, according to the Associated Press.

Despite certain defeat after voter fraud allegations have been widely unfounded, Trump’s support is still not waning among his allies who ventured to Washington this weekend.

Many still believe that this election is far from officially over even though Biden has exceeded the 270 vote threshold to win the White House ahead of Inauguration Day in January 2021.

As the ‘Million MAGA March’ officially wrapped up, the amassing crowd at the Supreme Court sought to send one final message to Trump, who already made an appearance before his supporters while sitting behind a window of his motorcade.

A series of “We love you” chants bursted out and echoed in the air, sending warm wishes to President Trump from his loyal and staunch supporters who are seemingly standing by his side regardless of whether he’s living in the White House or not at the start of 2021.