On Wednesday, Governor Andrew Cuomo declared Steuben County a ‘yellow zone’ as part of the state’s micro-cluster protocols in combating the Coronavirus Pandemic.

The designation was brought on by an increase in cases. However, an exact map and description of the zone has not been released by the Governor’s office.

“Steuben County has been at 4% for about three weeks,” the Governor said during a press conference. “That is not good.”

The restriction means that houses of worship will have to operate at 50% capacity, mass gatherings of no more than 25 people will be permitted, and dining (both indoor and outdoor) will be restricted to four people per table.

Any schools that stay open in the yellow zone within Steuben County will have to perform weekly testing of students and teachers or staff for in-person learning.

The New York State Department of Health will establish a percentage of teachers and students/staff who need to be tested by Friday.

The Governor suggested that movement between Pennsylvania and Steuben County could be a cause for the uptick. Nursing homes were the site of early-increases in confirmed cases during the month of September.

Number of active COVID cases ticks down slightly in Steuben, but another death reported

As of Wednesday afternoon there were 309 confirmed cases of the virus. There were 823 individuals quarantined, and 22 hospitalized. A total of 71 deaths have been reported in Steuben County since the start of the pandemic.

The rolling 7-day positive rate in Steuben sits at 6%, according to its interactive dashboard.

Here’s the image outlining the area that Governor Cuomo showed on Wednesday. It’s not clear at this time which communities are included. 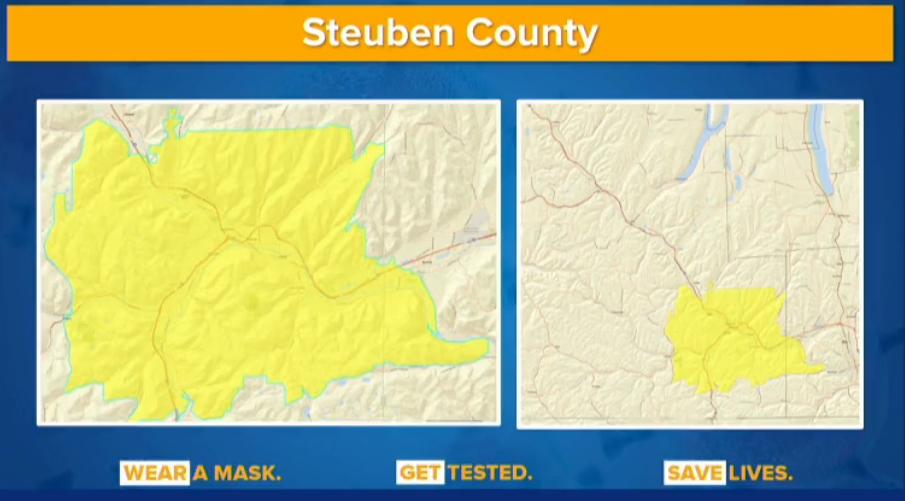