In a rematch 44 years in the making, Steve Hyde outlasts Mark Hylwa for 2020 SFCC Club Championship

Seneca Falls natives and Mynderse Academy graduates Mark Hylwa and Steve Hyde squared off in the final match of the Seneca Falls County Club Men’s Club Championship on Labor Day in 1976. Hyde was 19 years old and Hylwa was 20. Mark Hylwa would win the 36 hole match play final for his first of three straight SFCC Club Championships. He would go on to win 8 more for a club high total of 9 total titles. Steve Hyde would have to wait until 1982 before capturing his first club championship but has since went on to win a total of 7 with his most recent coming last year.

44 years later to the day, the two would finally compete in a rematch during the 36 hole final of the 2020 SFCC Men’s Club Championship. 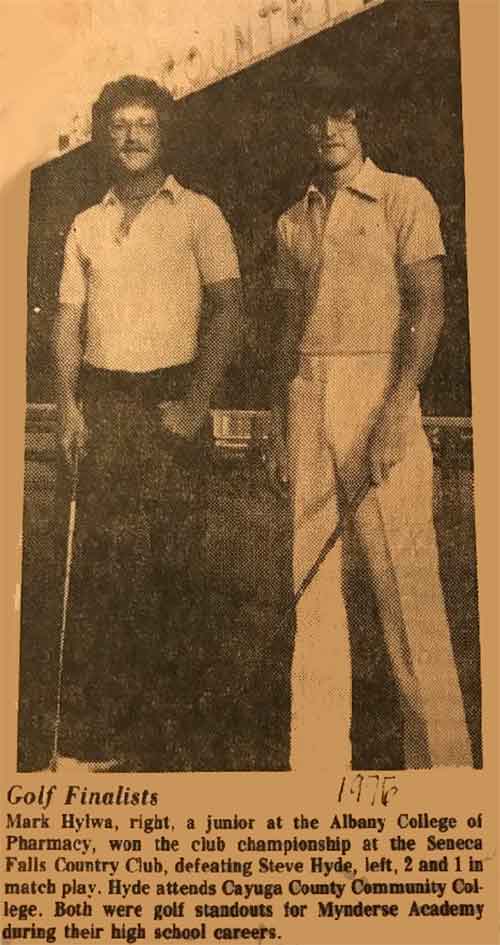 As defending champion, Hyde was the top seed in a bracket of 16 qualifiers who began the tournament playing 18 holes of stroke play early Saturday morning to determine the top 15 players. Mark Hylwa carded a 78 to tie for medalist and capture the #3 seed. Then, on Saturday afternoon, match play would would begin as Hyde advanced to Sunday morning’s final eight matches with a victory of Bill Barnett. Hylwa defeated Dan Kernan in the opening round.

On Sunday morning, Hyde advanced with a 6&5 victory over 2-time club champion Steve Brown while Mark Hylwa would birdie 3 of the last 4 holes to erase a 3 down deficit and advance against Kevin Schweitz.

During Sunday afternoon’s final four matches Steve Hyde would defeat Matt Walters 1 UP while Hylwa cruised to a 5&6 win over Steve Zajac.

While the rain stayed away for Monday’s 36 hole final, the winds did not. During the morning 18 wind gusts howled at over 40 mph and sustained winds of 20 mph whipped across the firm, fast golf course at Seneca Falls Country Club. The conditions would produce a true test of golf for the two perennial title contenders. After Mark Hylwa birdied the 18th hole of the match, he would take a 1 UP lead into the afternoon round. 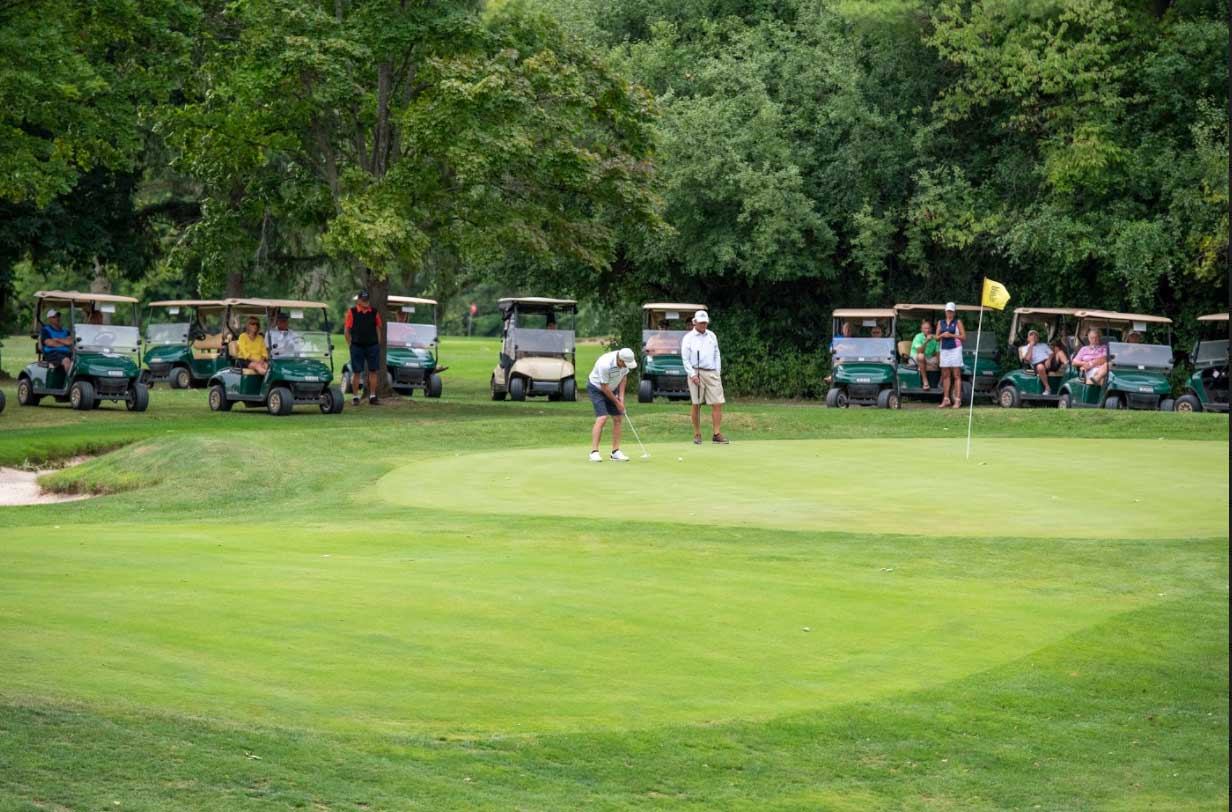 In the afternoon Hylwa would lose his lead early, only to win it back and ultimately build his advantage to 2 UP on the 17th tee, the 35th hole of the match. Hyde would place his tee shot on the 203 yard par three to just 12 feet while Hylwa would miss the green and ultimately concede the hole. After a pair of good drives on the par 5 finishing hole. Hylwa would fail to find the green in regulation before missing a 4 footer that would have ended the match. 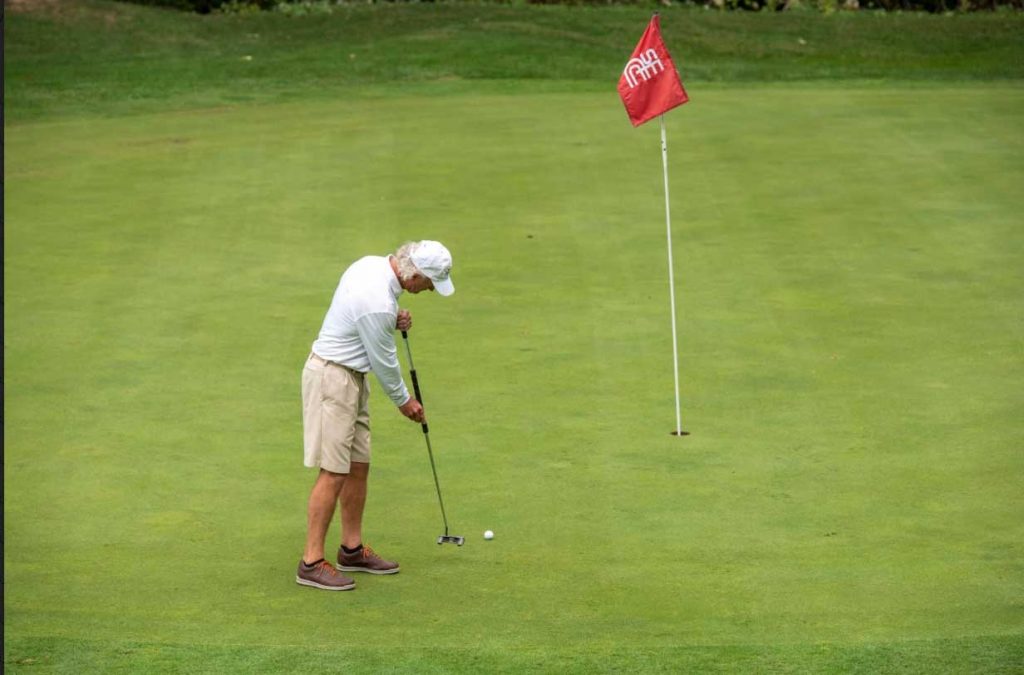 On the first sudden death playoff off, the short par 4 first hole at SFCC, Hyde would hit his drive just 10 yards short of the green in the middle of the fairway. Hylwa’s drive would find the left rough but his punch shot from under a green-side maple would find the middle of the green. Meanwhile, Hyde’s 2nd shot wasn’t his best effort as the ball rolled past the pin to the back of the green leaving both players with about 20 feet for birdie. Hylwa’s bid would run by the hole while Hyde’s nestled near the pin and was conceded. Then, Hylwa’s par putt would miss on the left lip ending the match. 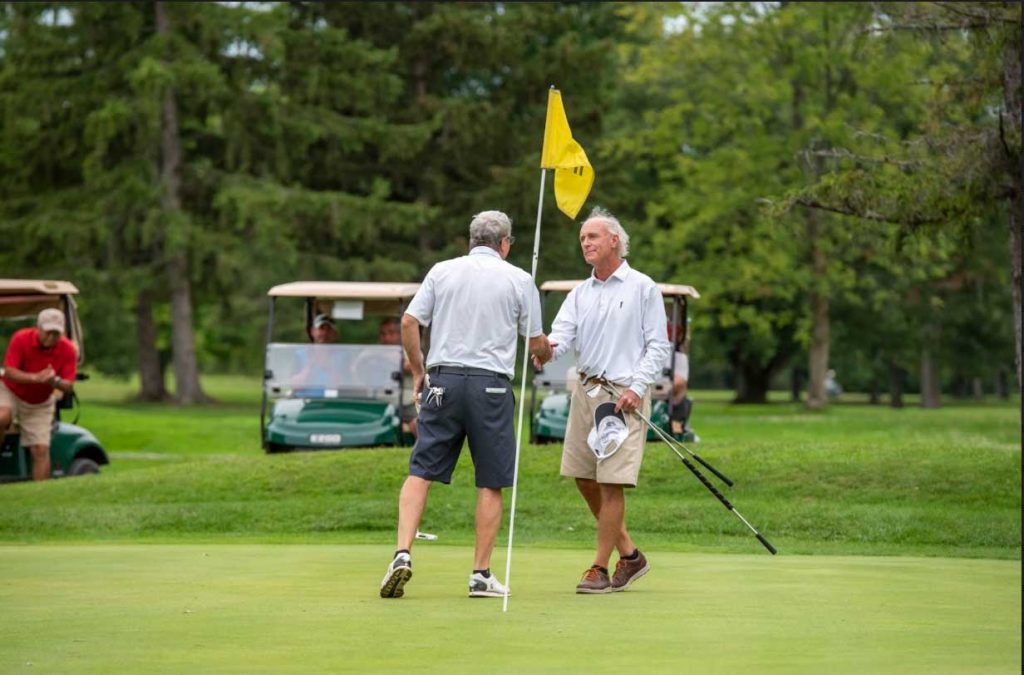 For Mark Hylwa, it was his first loss in a club championship finals match. He had previously been 9-0. The win would’ve given Hylwa a 10th title. His nine club championships remain the most by any player in the 80 year history of the event which has been held annually since 1940. It was generally believed that the 9 titles would be forever unmatched but after Hyde’s consecutive titles in 2019, and now 2020, he stands just 1 shy of Hylwa with 8 club championship victories.

Click here for a full gallery of photos from Monday’s final courtesy of Brad VanDusen Photography.

Below are the completed brackets for the 2020 SFCC Men’s Club Championship: 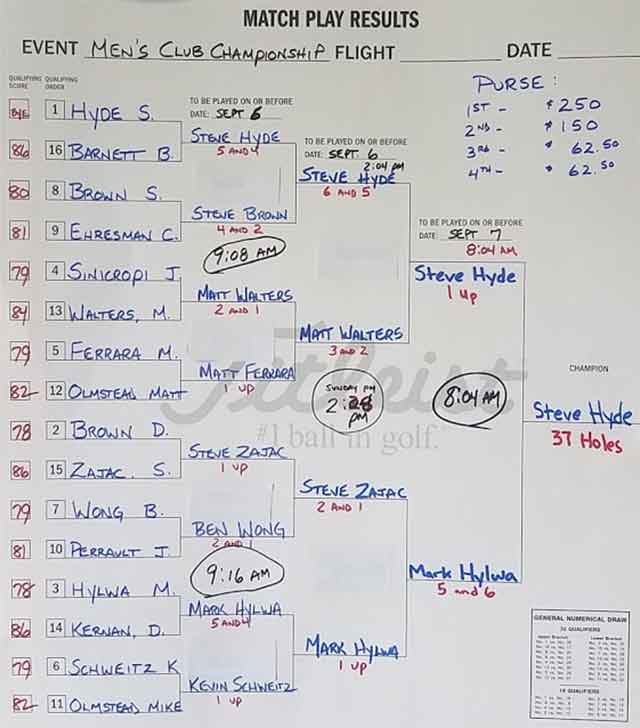 After graduating from Mynderse Academy in Seneca Falls and Syracuse University, Jim founded FingerLakes1.com, Inc. in December 1998 and currently serves as company President while also broadcasting and contributing content to our network.