So far, it’s something Governor Cuomo has not been interested in doing. When pressed on the matter earlier in the month, the Governor noted that it wasn’t safe to reopen casinos. He also noted that facilities like Del Lago, and New York’s other commercially operated gaming facilities were not ‘essential enough’.

At the time it was a point that workers at these casinos disagreed with.

On Thursday, workers made it clear that they are trying to provide for their families, and cannot do so on the limited income they are seeing. In short, they desperately need the casino and resort in Tyre to reopen.

Congressman Tom Reed (R-23) joined the rally, and called for the casino to be reopened. “We stand with you, we stand with our local officials, and stand with our state officials and are demanding to let you back to control your future lives,” Reed said over a megaphone to the cheering crowd.

Native American casinos in New York have been operating since mid-June. They haven’t reported any uptick in cases, but are not obligated to follow state law or rules with regard to operation.

Seneca County could lose upwards of $2.5 million as result of the closure, which includes a hotel on-site at the Del Lago property.

Earlier this week the Seneca County Board of Supervisors approved sending a letter to Governor Andrew Cuomo, calling for the immediate reopening of Del Lago. It was a position that Public Health Director Vickie Swinehart asked the Board to delay until October during committee debate. Her concern was that with back to school ramping up in the coming weeks, if the Governor were to act on such a letter, and grant reopening permission to Del Lago, that a combination of those factors could cause an uptick in cases.

However, that request was denied.

At this point, more than 1,000 workers are furloughed at Del Lago. Per a WARN notice earlier this summer, those furloughs would become permanent cuts if not ended within six months of their start.

Check out the letter and resolution passed by the supervisors below, as well as more photos from Thursday’s rally: 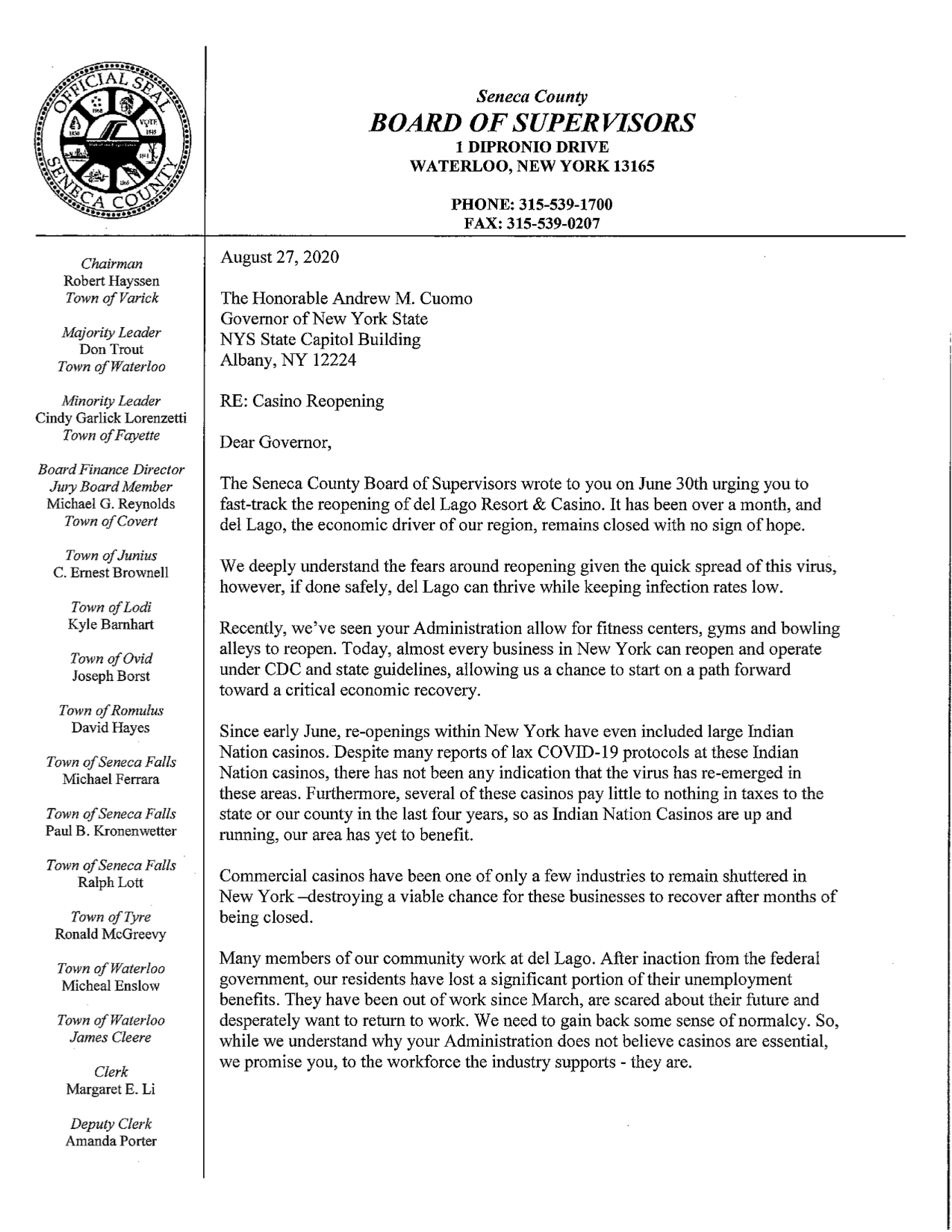 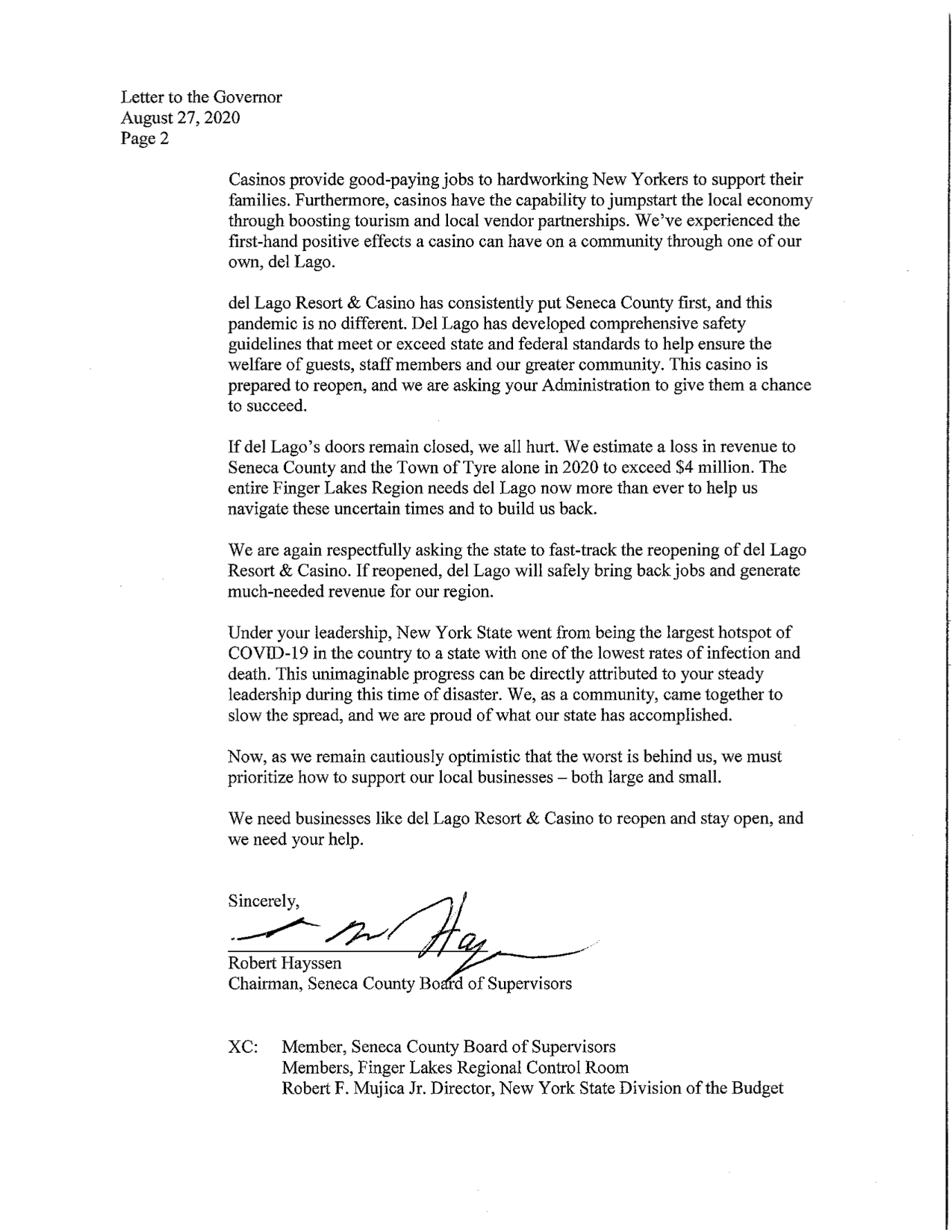 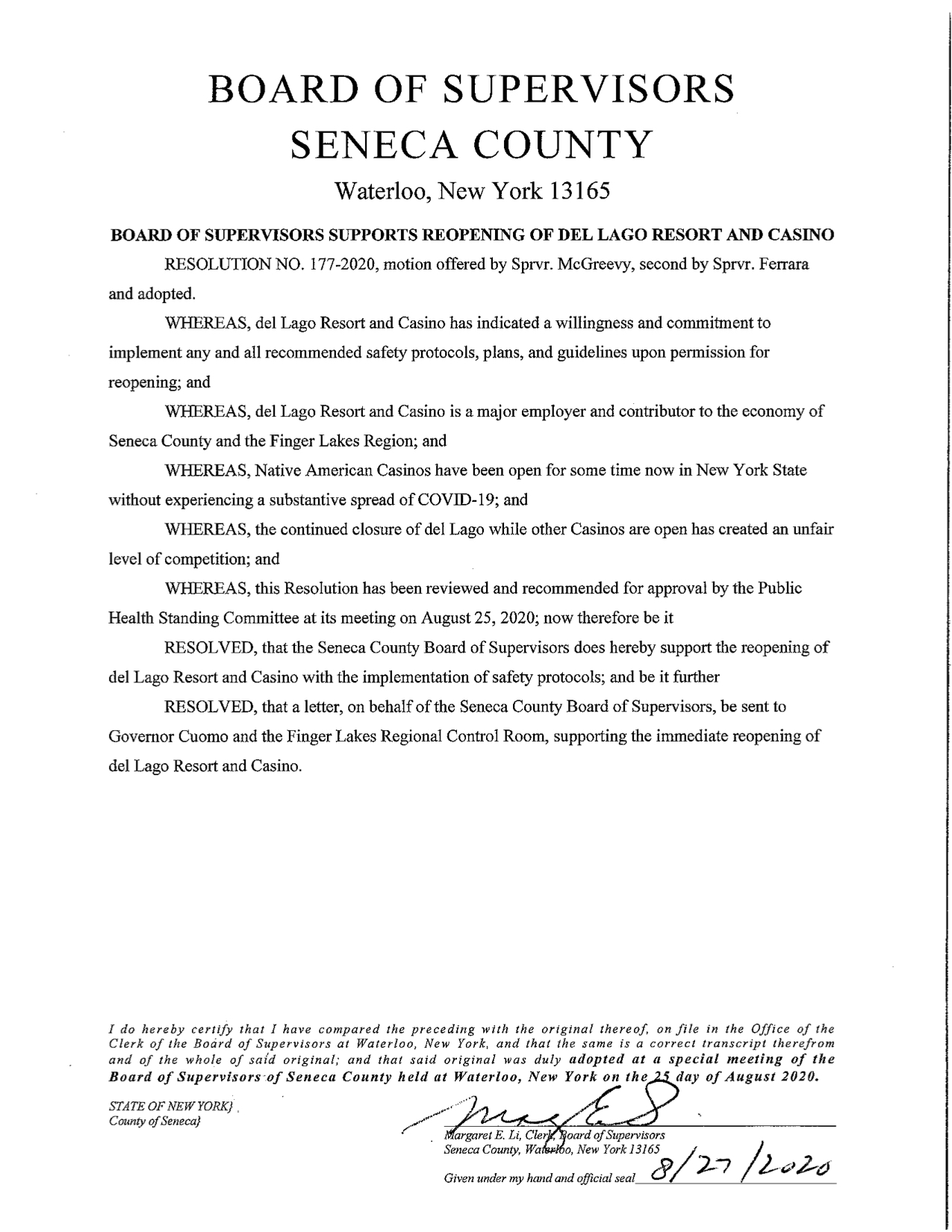 7 seconds ago
At its meeting last week, the Auburn City Council heard from the Preservation League of New York State on its ... MORE

26 mins ago
Social Security provides payments to retired Americans that rely on it each month. In 2022, the average benefit is $1,657 ... MORE

2 hours ago
The state of Idaho is offering a stimulus grocery tax credit worth an average of $100 for residents buying groceries ... MORE

2 hours ago
Indiana residents will soon see a stimulus tax rebate payment worth between $125 and $250 depending on their filing status ... MORE

3 hours ago
Governor Brian Kemp, of Georgia, has recently signed a bill that would pay residents stimulus payments worth up to $500 ... MORE

3 hours ago
Over 43 million people have student loan debt, worth about $1.7 trillion. Repayments for that debt will begin at the ... MORE