After receiving a confidential tip on May 19th from an eyewitness in the Town of Tyre, FingerLakes1.com initiated an investigation to address concerns regarding the use of town water and its extraction from a fire hydrant.

Seneca County Environmental Health Director Scott King shared that Jamie King, the town’s water purveyor informed him that Tyre employees have been filling a poly tank with public water, which has been supplied to an unidentified town-owned building. 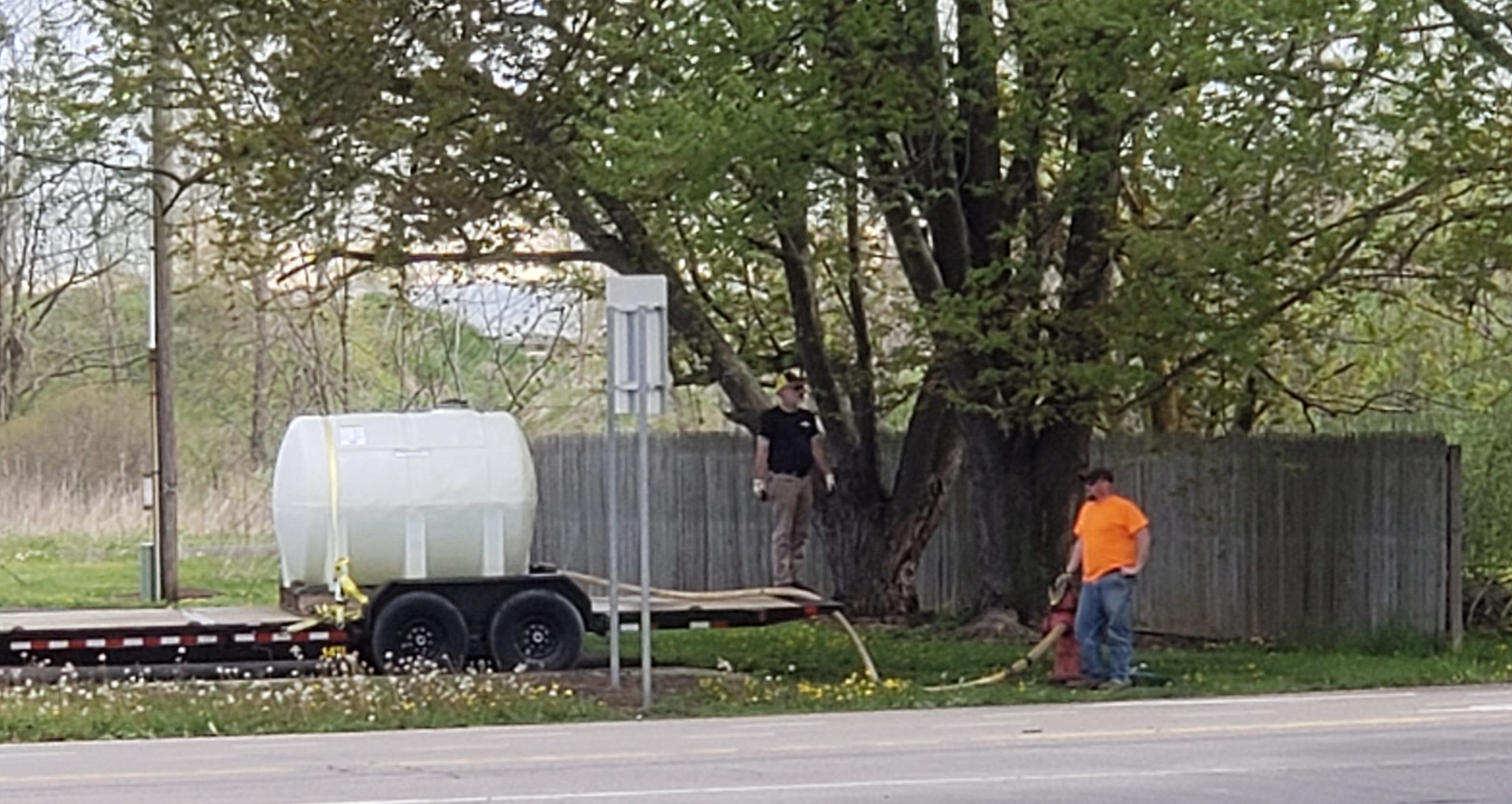 Photo provided to the FingerLakes1.com Newsroom, showing a Tyre employee filling the tank via hydrant.

“They were utilizing this tank as a temporary water source for this building that apparently does not have a suitable water supply at the moment,” King told FingerLakes1.com.

He also confirmed that there were two faults at the town level after following up on the tip that FingerLakes1.com shared with the Seneca County Health Department.

First, town employees were filling the tank from the bottom instead of the top, which is not considered a sanitary practice.

Second, a backflow device was not securely mounted to the hose.

The significance of using a backflow device to lower risks that rests in the possibility of having stale or untreated water wash back into the municipal water line while collecting water from a fire hydrant.

However, the severity of the health risks had risen when Tyre Town Supervisor Ronald F. McGreevy told FingerLakes1.com that the well in question has been out-of-commission “since approximately 2010.”

After the dug well at the Highway Department Garage became inoperable, “it was determined that the most economical and feasible solution was to haul water from a hydrant to the highway garage,” according to McGreevy.

As a result, the town decided to purchase a poly tank dedicated for this specific purpose.

For nearly a decade, water has been collected for restroom facilities at the garage, and McGreevy even stated that on top of tapping fire hydrants, the town has purchasing jugs of drinking water as well.

“This water is used for restroom facilities, including sink and toilet. The highway garage is equipped with a 5-gallon water cooler and purchases jugs of drinking water from a local vendor,” McGreevy said.

In light of the recent developments in response to the investigation at FingerLakes1.com, McGreevy intends on implementing changes and taking accountability for the situation, starting with consulting the town’s Highway Committee to consider alternative solutions.

“I have asked the highway committee to look into this matter, including alternatives and make a report at an upcoming town board meeting,” he stated.

Additionally, McGreevy has instructed Jamie King, the certified water operator for the Village of Waterloo “to provide a written procedure to be followed by the town highway department personnel when taking water from a hydrant.”

Previously, no such written procedures ever existed on the books for the Town of Tyre, even though town employees have been gathering water from hydrants since the beginning of the last decade.

While the town does not plan to purchase a manufactured blackflow device, Jamie King is currently working on constructing a homemade tool possibly out of PVC, which would essentially create an air gap that traps water and prevents any sewage to seep back into the public water line through the hydrant.

Moving forward, the tank will be filled from top-to-bottom, claiming that town employees simply “did not know” while affirming that the eyewitness tip possessed “a valid concern,” according to Director King.

“I guess, I think all those folks involved now understand the importance of filling the tank correctly,” he shared.

While Director King has been unaware of the amount of the time that the Town of Tyre has been drawing water from their hydrants for the town building, he remains confident that the municipality can safely manage to collect water – even though the tank has been improperly filled in the past and without a backflow device.

“I think they can draw this water safely for a short period of time for us at this town building,” he said.

Although the repair schedule remained a mystery for King at the county level, who had no prior idea how long the well had been out for and whether repairs were to ever occur, McGreevy knew the answer all along – that the town has not considered to repair the well.

Still, for King, who admitted that the town has been at fault, he believes that town residents should be more cognizant of the water that they consume, claiming that employees were conscientious of their actions.

“Hopefully those other things are still in place that will protect someone from getting ill, and truthfully, I think the biggest protection in this case, thinking it through logically is the folks drawing the water. If it’s town employees for their own use, they’re not going to want to do anything to contaminate themselves,” King added.

Despite the decade-long lack of oversight from the Town of Tyre and McGreevy’s prompt responsiveness on his behalf as a public official, the water is still safe in Tyre based on the latest sample collected as of May 20th of this year, which tested negative for the presence of total coliform and E. Coli bacteria.