What to Expect from May’s Halving and How It Can Affect the Price of BTC?

The recent spike in volatility triggered by the stock market crash of February 20 has left investors pretty concerned about the future of stocks, bonds, corporations, industries, and yes, cryptocurrencies.

In the current context, investing and trading has become a challenging endeavor, as there’s a significant volume of news coming every day that feature the surge in coronavirus cases around the world, expert’s takes on the situation, along with other developments that continue to take a toll in company’s valuations, currencies, and other financial instruments.

Meanwhile, Bitcoin’s (BTC) major event for the year, the ‘halving’, is set to take place around May when the cryptocurrency’s algorithm will automatically cut in half the reward earned by miners for unlocking bitcoinbank and new BTC blocks.

Considering the fact that this event already brings on significant expectations regarding its impact on the performance of the cryptocurrency, the scenario in which it is set to happen adds up to the potential surge in volatility that BTC is going to experience throughout the following weeks and traders are probably wondering if this is a good time to buy cryptocurrencies.

In the following article, we will try to put some context around the current situation of BTC so you can draft your own conclusions as to the future of the world’s most traded crypto token. Let’s start by defining what a ‘halving’ is.

Bitcoin’s code was designed to progressively cut the reward earned by miners per each block they mine in order to limit Bitcoin’s supply until the reward becomes 0.

Back when Bitcoin was launched, miners received a reward of 50 BTC per block. Meanwhile, the algorithm is set to cut this reward in half after a total of 210,000 blocks are mined.

Each of the two preceding halvings has been followed by a rally in the price of Bitcoin, as a result of this simple reality: demand remains similar, while supply goes down.

Nevertheless, even though there’s a clear correlation and theoretical base to expect a surge in the price of BTC after the halving occurs, there are other elements that could counter its effect:

That said, it is important for BTC traders to understand that this halving is taking place under fairly different circumstances than the other two.

Bitcoin’s performance so far this year has not been as bright as traders initially expected, and it is important to note that the price of BTC has somehow followed the performance of the stock market, even though it has reacted a bit later.

BTC accumulates a loss of 4.63% year-to-date and, if its current correlation with the stock market as a whole continues, the price may find further obstacles to break its February-14 peak or even some smaller resistance levels. 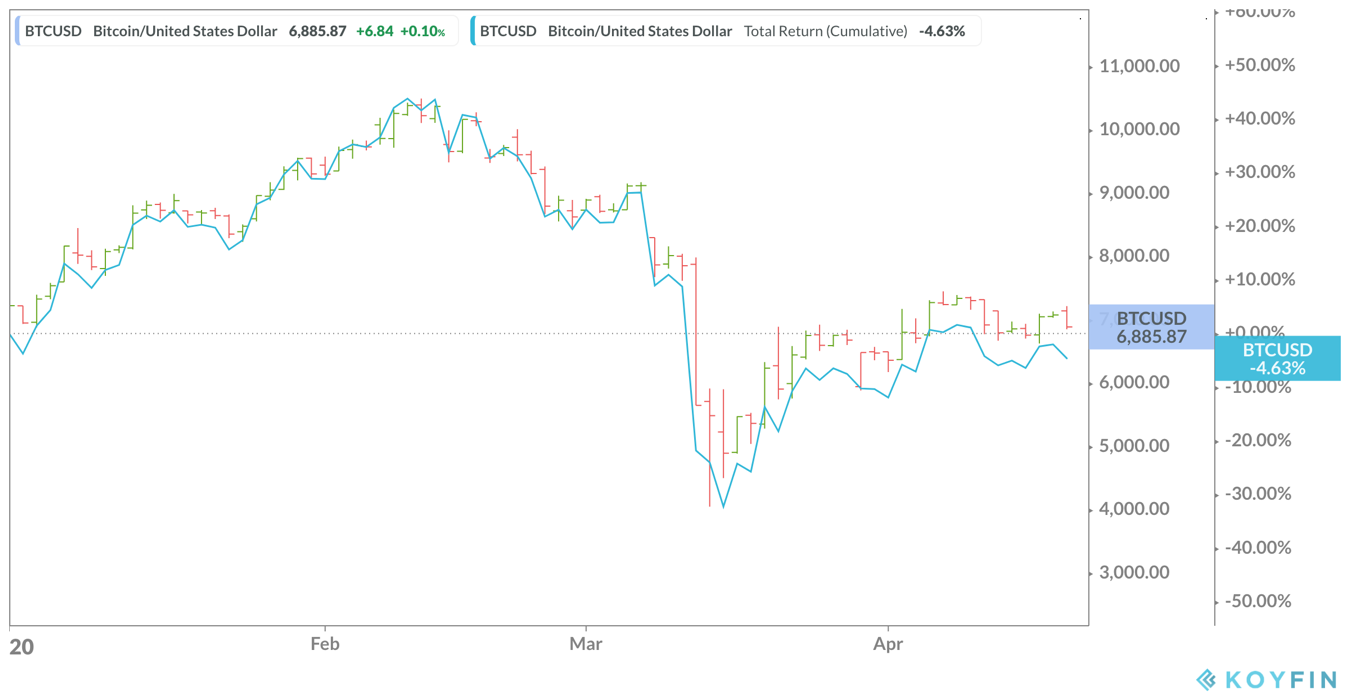 BTC & The US stock market – An increase in correlation

BTC’s correlation with the stock market has been volatile in the past year, but their relationship has become closer since the beginning of 2020, possibly as both stock and crypto traders are sharing similar concerns and might be acting on similar mindsets.

That said, the correlation is below 1, which means that BTC’s performance is similar yet not the same as the S&P 500. If the stock market is set to drop in the following weeks, BTC may cushion those losses as the crypto token will experience a milder fallout, or there’s always the possibility that the halving event reverses the correlation once again, as it has already happened two times in the last 12 months. Bitcoin’s YTD performance indicates that there’s still certain upward potential ahead, but the newly-developed correlation with the stock market poses a threat to this hypothesis, as BTC could follow through on a potential drop in the S&P 500 resulting from more virus-related concerns.

The actual effect of the upcoming ‘halving’ is far from clear, and investors should be cautious about not being overly-optimistic, considering the fact that cryptocurrencies are still subject to the overall sentiment of the investment community.