With three starters on the bench after fouling out, a lineup featuring Buddy Boeheim at small forward, freshman Brycen Goodine at guard and freshman Jesse Edwards a center, Syracuse rallied from a four-point deficit to pull out a 75-73 victory over Wake Forest at the Carrier Dome on Saturday. 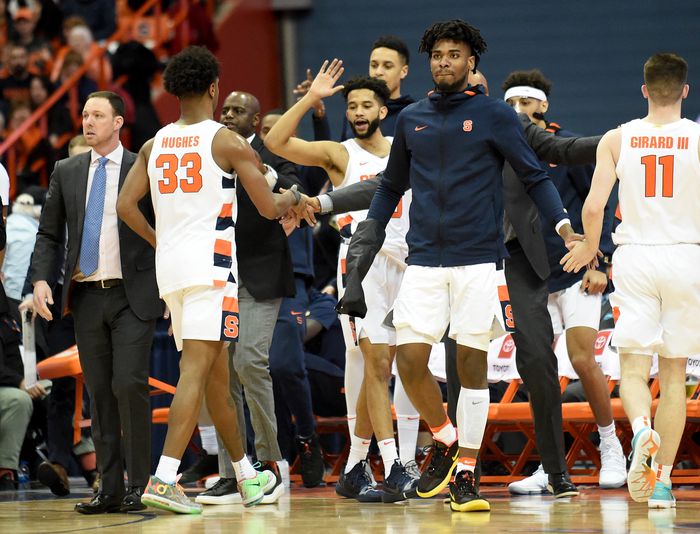 Goodine scored the game-winner with 1.5 seconds left. Elijah Hughes missed a jumper, but Edwards kept the ball alive with a tip. Goodine grabbed the rebound and laid the ball off the glass.

Orange get the win in a thrilling finish in the Dome! pic.twitter.com/QVjPz5CpBd

FINAL: Cuse 75, Wake 73. The Orange squander a 16-point lead and live to tell about it. Huge plays down the stretch by Goodine and Edwards after three bigs had fouled out. pic.twitter.com/rJqAFoHK8R

Saturday night with the boys 🍊✊ pic.twitter.com/ct0pH09Qbm

Boeheim: ”At the end, we didn’t have anybody in there and they played defense as good as you can play. They got some steals and made some unbelievable defensive plays. For Brycen to get that last basket – Jesse did a really good job out there for us. He’s getting better…” 1/2

Boeheim: “The disappointing thing is that we have three guys commit five fouls and they were foolish fouls. We can’t have that and win. We overcame a lot of things today. With those guys out… it’s a good win.” 2/2

After facing off against Duke in front of college basketball’s largest crowd of the year, Syracuse returns to Jim Boeheim Court on Saturday, Feb. 8 take on Wake Forest. Tipoff in the Carrier Dome is set for 8 p.m.

After winning two consecutive home contests against ACC rivals Boston College and Pittsburgh, the Orange (13-9) lost to the Duke Blue Devils in a high-scoring 97-88 affair. Junior Marek Dolezaj spearheaded the Orange offense with a career-high 22 points, while three other Orange players finished the game in double-figures: redshirt junior Elijah Hughes (21), freshman Joseph Girard III (17) and sophomore Buddy Boeheim (13). Syracuse is in fifth place in the ACC standings with a 6-5 record in conference play.

Wake Forest is coming off a 76-86 loss at Louisville on Wednesday. The Demon Deacons are 10-12, including a 3-9 record against ACC opponents. Wake Forest is 15th in the ACC standings and is 1-5 away from LJVM Coliseum in conference play this season.

Saturday’s game will be the 10th all-time meeting between Syracuse and Wake Forest. The Orange have won all but one of the previous nine contests between the two schools, including last year’s meeting, 79-54. Tyus Battle led the Orange in scoring with 21 points after previously establishing the record for most points by a Syracuse player against Wake Forest during the 2017-18 season (34).