The Syracuse Orange’s perimeter attack was a little too much for Oakland’s inside offense.

Syracuse just enough offense from Joe Girard, Elijah Hughes and Buddy Boeheim to offset Oakland’s low-post tandem of Brad Brechting and Xavier Hill-Mais in a 74-62 win over the Golden Grizzlies at the Carrier Dome on Wednesday night.

Hughes led the Orange with 23 points. Girard scored 20 points and Boeheim chipped in with 14 points. Those three combined on all of Syracuse’s 11 3-pointers. 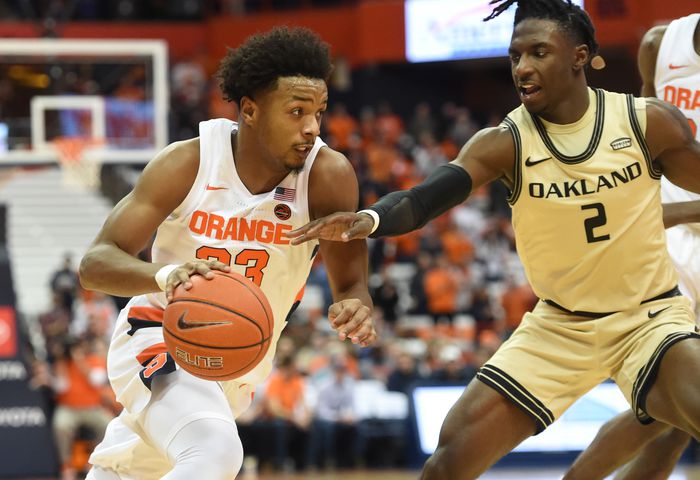 The game will be televised on ESPNU and on the Watch ESPN app. Fans can also listen to all the action on the Syracuse Sports Network from Learfield IMG College.

Sophomore Buddy Boeheim led the Orange offense with 25 points, just one shy of his career high, in Syracuse’s 89-79 setback at Georgetown on Saturday. He was 9-for-18 from the field and connected on a personal-best seven 3-point attempts against the Hoyas. In his last two games, Boeheim is averaging 25.5 points.

Wednesday’s game will the last of six straight away from home for Oakland. The Golden Grizzlies are 1-4 so far during that stretch and 5-6 overall. Oakland is coming off a 72-49 loss versus No. 16 Michigan State on Saturday.