The Buffalo Bills did it right.

No waiting another game or even two to punch their ticket to the postseason. No leaving anything to chance.

The Bills had their shot Sunday night to win and become no worse than a fifth seed in the AFC playoffs, and they cashed in with a 17-10 victory against the Pittsburgh Steelers at Heinz Field. It marks the Bills’ second postseason appearance in the last three years. 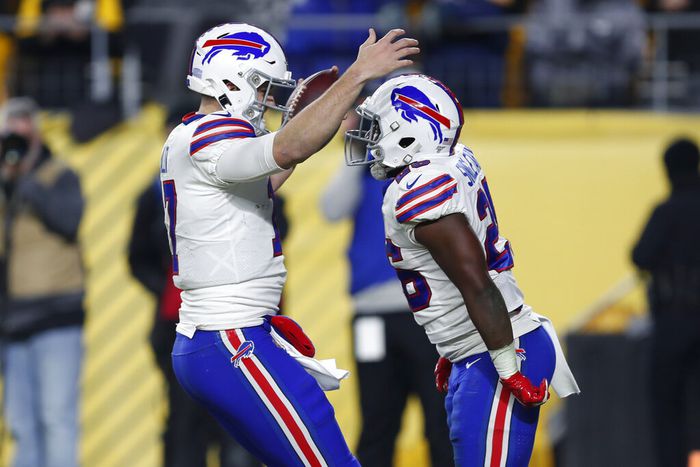 Allen has also now tied Doug Flutie (20) for the most consecutive games accounting for a TD by a Bills QB.

Tre’Davious White, however, running and jumping into Lee Smith’s arms is peak celebration of team.

Coach McDermott: “I’m humbled to make the playoffs in two out of three years here. I’m grateful to be part of the men and women that we have in our locker room who work so hard. Our team is hungry to keep getting better.” #GoBills pic.twitter.com/q2KMYRSK9p

QB Josh Allen: “Shout out to #BillsMafia, they’ve made road games feel like home all season. I’m thankful for our fans and everything they sacrifice to support us, I hope we made them proud.” #GoBills pic.twitter.com/BtX5gZ8gSl

In case marriage wasn’t hard enough on its own #BillsMafia #Bills pic.twitter.com/jQoUoEH8oz

The only people left at Heinz Field. Our people.#BillsMafia | #GoBills pic.twitter.com/7mkwMt4Sr3

That feeling when you know you’re going to the playoffs #Bills pic.twitter.com/oBnCHBwyXl

Josh Allen on scoring during the "Renegade" drive: "We played that song over and over again in practice…We were able to respond." #Bills also played Black and Yellow knowing these songs would be blasted tonight #NFL #GoBills

#Bills fans if you’re not watching SportsCenter right now your boy is getting that Scott VanPelt shine pic.twitter.com/tFELzFW26O

The beat goes on for the Buffalo Bills as they look to lock down a playoff spot. They play their next two on the road, starting this Sunday night against a red-hot Steelers team. Pittsburgh has won three in a row and seven of their last eight, after starting the season with a 0-3 record. And this week’s game is a primetime showcase for the Bills and they will play their first Sunday Night Football game since 2007.

All it takes is a win, one win, for the Buffalo Bills to claim a playoff spot. The New York Times Playoff Machine says they’ve got a 95 percent chance to make the postseason now.

Bills not wearing any pads today for practice. A bit unusual too see on a Wednesday. pic.twitter.com/iWTrsSoWv8

#Bills HC Sean McDermott says the Steelers have "as good of perimeter players" on offense as he's seen on film this year. He made sure to highlight the speed they have.

"When you have an established culture because you've been there a number of years, that helps you navigate through adversity." — Sean McDermott on how Mike Tomlin and the Steelers have done such a good job this year given their QB situation.