ICE: Driver in fatal Weedsport crash did not have legal status in U.S.

ICE: Undocumented immigrant had been deported before fatal Weedsport wreck

U.S. Immigration and Customs Enforcement confirmed on Wednesday that the undocumented immigrant from Guatemala who was charged with vehicular manslaughter in connection with Sunday’s fatal wreck in Weedsport had previously been deported, but returned the the U.S. illegally.

Many wondered why Perez-Vasquez, who was charged on Tuesday, was allowed to remain free after being charged with DUI in Wayne County last month.

All of that aside, Wayne County Centralized Arraignment Processing Court determined “Perez-Velasquez was ineligible for pre-arraignment detention under the court’s policies, and he was released to a sober third party with appearance tickets.”

His case will proceed in Cayuga County.

An undocumented immigrant has been charged with vehicular manslaughter after a fatal crash over the weekend in Cayuga County.

Sheriff Brian Schenck reports that members of his department are still investigating the fatal crash that happened on Sunday at approximately 1:45 p.m. along Route 31 in the village of Weedsport.

Schenck says that investigation has shown that a compact tractor was being operated by Mark A. Knapp, 59, of Weedsport – traveling east on the south shoulder of the road – when his vehicle was struck from behind by an undocumented immigrant.

Schenck says that Knapp was pronounced dead at the scene.

Heriberto R. Perez-Lelasquez, 31, of Savannah was identified as the operator of the 2010 Chevy Cobalt, which struck Knapp’s tractor. Sheriff Schenck says that he fled the scene, but was apprehended a short distance away with the assistance of a private citizen.

Sheriff Schenck says that Perez-Velasquez is originally from Guatemala; and has aggravated DWI charges pending in Wayne County. Those stem from an arrest on October 19th.

Perez-Velasquez was charged with second-degree vehicular manslaughter, driving while intoxicated, leaving the scene of a personal injury accident, and failure to use designated lane. 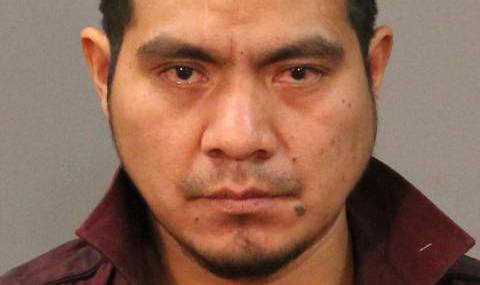