As the NFL trade deadline nears, another report has surfaced that the Buffalo Bills are looking to upgrade at the wide receiver position.

The latest report comes from Sports Illustrated’s Albert Breer. In his latest article on the NFL trade deadline heating up, Breer mentioned Buffalo among the teams looking at available wide receivers. 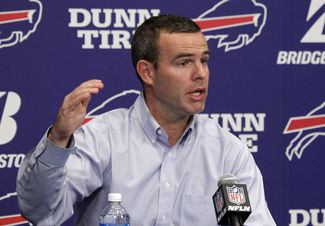 Again, the market for receivers is pretty hot. The Patriots and Niners were out there actively looking. Also among those that have kicked the tires on adding at the position, with the caveat that these talks can simply be exploratory, have been the Saints, Bills, Eagles and Packers. Two names that have been floating around out there at the position won’t excite people like A.J. Green would—Jets’ Robby Anderson and Browns’ Rashard Higgins. The former, naturally, would come at a higher cost than the latter.

Breer would go on to add that the Bills were one of four teams interested in trading for Emmanuel Sanders.