Aaron Hicks to get TJ surgery, out 8-10 months

Aaron Hicks needs Tommy John surgery after all. The Yankees center fielder will have the surgery on Oct. 30 and need 8-10 months to rehab, general manager Brian Cashman said Thursday.

Two other Yankees also had procedures once the off-season began. Masahiro Tanaka had arthroscopic surgery to remove bone spurs in his right elbow, and Luke Voit had surgery to address his bilateral core muscle injuries.

Hicks’ timetable puts his tentative return window between next June and August. Tanaka and Voit are both expected to be ready for the start of Spring Training. 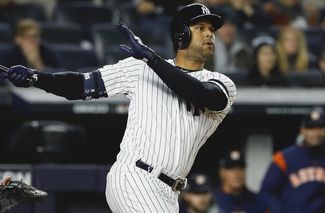 Hicks was originally recommended for Tommy John surgery after he injured his throwing elbow on Aug. 3 and was diagnosed with a right flexor strain. But he instead resumed throwing after a short rest period and was even able to return for the American League Championship Series, despite having missed the final two months of the regular season and the first round of the playoffs