It was a little later than the peak dinner hour Friday night when Sonia Sotomayor and her party of six walked into El Bajio restaurant on Fall Street for their evening meal.

On Monday, Homero Guerrero — he opened the Mexican eatery with his brother, Eduardo, three years ago — was still beaming about the visit from the Supreme Court justice and first Latina appointed to the nation’s highest court. Sotomayor and 10 other women were in the Finger Lakes over the weekend for their induction into the National Women’s Hall of Fame.

“She’s the most famous (to have ever eaten here),” Homero Guerrero said of Sotomayor. “She’s very nice.”

As he gestured toward Fall Street, Guerrero said he was surprised Sotomayor chose his restaurant “with so many nice places,” but he was obviously touched.

He said he and the justice conversed in Spanish, and Sotomayor consented to having her photo taken with him and his brother. Guerrero wanted to wear a sombrero for his photo op and posted that picture on the restaurant’s Facebook page late Saturday night. By Monday the post had been shared 10 times and attracted more than 60 likes.

He’s planning to have the photo enlarged and framed for display on one of the restaurant’s brick walls. 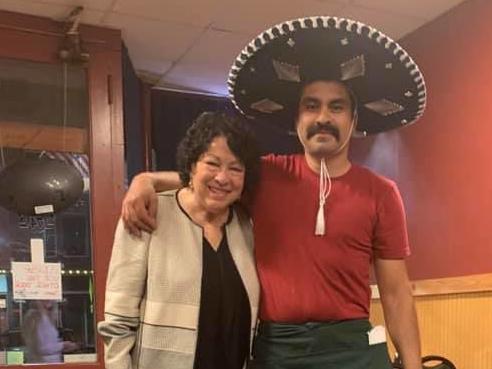