The Buffalo Bills were resilient on Sunday. The Bills came back from a 16-point deficit and scored 17 unanswered points to upset the New York Jets at MetLife Stadium 17-16.

The Bills struggled early on. Josh Allen had four turnovers in the first half, Frank Gore was tackled for a safety and the Jets had a pick-six. 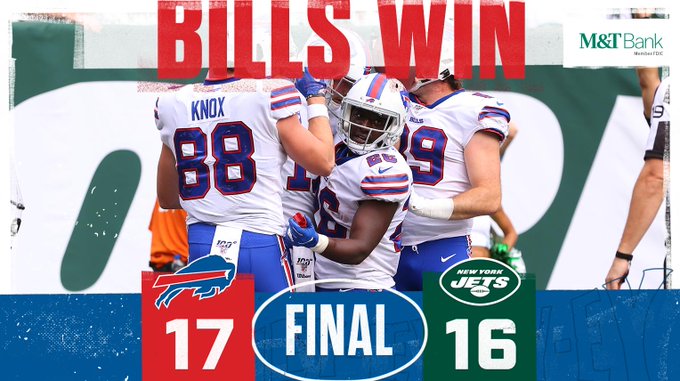 Allen and the Bills came alive in the second half. Buffalo leaned on rookie Devon Singletary and he showed every bit of why he was drafted in the third round. Singletary produced 70 rushing yards on four carries and added 28 yards receiving.

Allen threw for 254 yards mainly attacking short and intermediate routes, still his longest pass of the day was his most important. Allen found John Brown for 38 yards and the score to give Buffalo the lead with 2:55 left. Hauschka was money and gave Buffalo the lead and the eventual win.

Think the #Bills are excited about today’s win? pic.twitter.com/9qZAfi29h6

With their 17-16 win over the Jets, the Bills have won on the road with 4 turnovers for the first time since Week 2 of 1994, when they won 38-35 at the Patriots despite having 4 turnovers. pic.twitter.com/A2zkR4bXgf

QB Josh Allen: “No one on our team flinched when we were down at halftime. This isn’t how we want to win every week, but this is the definition of a team effort.” #BUFvsNYJ #GoBills pic.twitter.com/u4MJnunXlf

#Shoutouts: Devin Singletary totaled the third-most rushing yards (70) by a Bill in their NFL debut on only four carries.

The Buffalo Bills 60th season opens in similar fashion to the first one — a road game against New York.

The Bills kicked off play in the old AFL on September 11, 1960 with a 27-3 loss to the New York Titans (now the Jets) in the Polo Grounds. Sunday marks the 117th all-time regular season meeting between the franchises. The Jets have taken four of the last six games against Buffalo, but the Bills lead the all-time series with 61 wins; the Jets have won 55.