After the Buffalo Bills’ offense launched training camp with a surprisingly competent session, the defense battled back in a big way for day two on Friday. Defenders shut down plays left and right, with Tremaine Edmunds and E.J. Gaines getting in the mix for pass breakups. Dean Marlowe intercepted one of Josh Allen’s tipped passes in the 11-on-11 session. The offensive players did themselves no favors, with a slew of drops and overthrows from each set of players. At one point, within five minutes, Robert Foster, Isaiah McKenzie, Ray Ray McCloud III, and Dawson Knox had each dropped a pass, and Brian Daboll yelled at the offense to focus better. 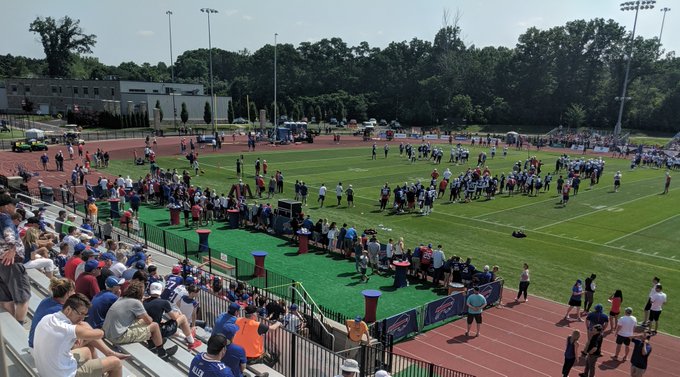 Put it in the books! Day one of Buffalo Bills training camp 2019 wrapped up on Thursday. The key themes for opening day were establishing the various position battles on the team, and of course, Josh Allen’s status.

Soak it in mate!@ChristianWade3 at his first NFL Training Camp

Practice has started! First 11 on 11 drill David Sills is out with the ones #BuffaloBills #nfltrainingcamp pic.twitter.com/IhJWvXIYzS

We started off our Friday with @buffalobills QB Josh Allen talking communication, first week of camp, and his offensive progression pic.twitter.com/anYPTJCBYw