The West Division All-Stars rallied to score two runs in the bottom of the eighth inning to force a 5-5 draw in the 2019 PGCBL All-Star Game in Saugerties, New York. The All-Star Game was hosted by the Saugerties Stallions at Cantine Field.

The West Division started the game with a flurry of runs in the top of the first inning. A double from Geneva’s Trevor Rogers (San Francisco State) drove home the first run of the ball game and an infield single from Adirondack’s Chris Rotondo (Villanova) brought home two more. The West gained their initial three-run advantage off East Division starting pitcher Lane Miller (Indiana State) of the Saugerties Stallions.

The East Division chipped away at the early West Division advantage with a run in the second and a run in the fourth inning. With runners on first and third, Albany’s Aaron Roose (Azusa Pacific) grounded into a double play that brought home Mohawk Valley’s Nick Cimillo (Manhattan). In the fourth, a groundout by Amsterdam’s Michael Turconi (Wake Forest) drove home Oneonta’s John Rhodes (Kentucky) for the second run of the East Division’s night. After four the West Division held on to a 3-2 lead. 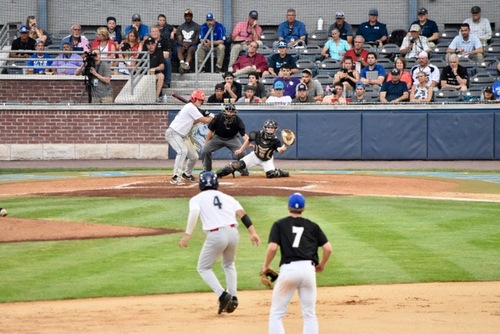 The East Division opened up its only lead of the evening in the bottom of the sixth inning. John Rhodes (Kentucky) of Oneonta drove in a run with a single to start the East Division rally. He later scored on a single from his Outlaws teammate Cavan Tully (Binghamton) to give the East their first lead of the ballgame. Brian Hart (Marist) of Glens Falls gave the East some insurance later in the frame when his single into left field brought home Tully. The East Division All-Stars exited the sixth inning with a 5-3 lead.

Some of the sights from the 2019 PGCBL All-Star Game.

The West Division rallied to tie the game in the eighth inning. A double from Newark’s David Bermudez (Rider) brought home one runner and a bases loaded walk from Saguerties’ Austin Cole (Saint Rose) to Watertown’s Derek Kasperzyk tied the ball game at five.

Both pitching staffs hurled a scoreless ninth inning to keep the game at 5-5. With no more available pitchers for both rosters, the game was called as a draw after the bottom of the ninth.

Rhodes was named the PGCBL All-Star Game MVP as the Outlaws outfielder went 3-4 with one RBI and two runs scored.

The MVP of the 2019 PGCBL All-Star Game is @j_rhodes6 (@UKBaseball) of @OutlawBaseball! Rhodes went 3-4 with an RBI and two runs scored! pic.twitter.com/afp32LWze7