Valedictorian Noah Bastedo has earned a 99.5 percent cumulative grade point average and will graduate high school with 26 college credits. He has been on the Principal’s Honor Roll every quarter since his freshman year and has earned the special honors designation for holding an academic average of over 100% each quarter since his sophomore year. He was inducted into the National Honor Society, attended the Hugh O’Brien Youth Leadership Conference, and was captain of the Masterminds team, where he was the third highest scorer in the league.

In addition to his academic accomplishments, Bastedo has participated in Clyde-Savannah athletics. He has been on the football team for four years and was co-captain of the team his senior year. He was also on the indoor track team for four years and outdoor track team for two years. He received a National Football Foundation, College Hall of Fame Gold Scholar-Athlete award, and the Burlsworth Award.

Bastedo has also been involved with the music department throughout his high school career. He has been a member of the concert and jazz bands, and was a member of the senior high chorus, where he was selected to sing in the high school male quartet group, “The ACES,” his junior year. He has been selected to the all-county chorus every year since fifth grade, performed in the school’s variety shows, and played the lead role in the school’s musicals over the past several years. In his junior year, he received the Semper Fidelis Award for Musical Excellence, and as a senior he received the National Choral Award.

Outside of school, Bastedo sings in his church’s choir, where he received the Saint Cecilia and Hands of Christ Awards. He was also a Boy Scout, where he achieved the rank of Life Scout, held the position of senior patrol lead, and was inducted into the Order of the Arrow, which is the Honor Society for the Boy Scouts. 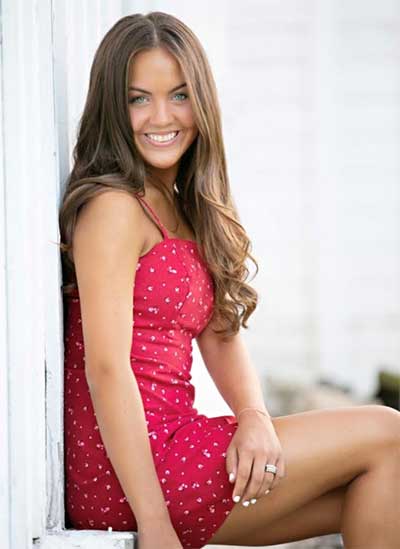 Salutatorian Julia Secor has achieved a 99.2% cumulative grade point average and will graduate high school with 26 college credits. Her academic achievements include a four-year presence on Principal’s Honor Roll for every quarter of her high school career, scholar-athlete recognition, additional honors for earning an average of 100% or greater every year of her high school career, and student of the quarter for various subjects. In recognition of her scholastic achievements, she was inducted into the National Honor Society as a junior in 2017 and served as the NHS vice-president during the 2018-2019 school year.

Throughout her high school career, Secor has participated in many JV and Varsity sports, including indoor and outdoor track, volleyball, cheerleading, and soccer. She set a new school record as a member of the 4X400 relay team. She has also been involved in the music department, as she has participated in band, jazz band, chorus, and the select Queens ensemble throughout high school. She has performed in two musicals, and most recently played the lead role of Dorothy in “The Wiz” her junior year.

Outside of her academic endeavors, Secor is an active member of the Lighthouse Community Fellowship in South Butler, where she volunteers in the nursery and is an active member of their youth group. In addition to her congregational ministries, she participated in an outreach program serving homeless and transitional women at the New York School of Urban Ministry in New York City. She was also involved in the Philadelphia Project, which worked to meet the needs of the community through free home repair, preschool program, and after-school childcare. Additionally, she has worked as a camp counselor in the Clyde-Savannah summer STEAM program and for the family business, Secor Lumber.

After graduating from Clyde-Savannah High School, Secor will attend Nazareth College, where she plans to pursue an accelerated 3+3 law degree through Nazareth College’s partnership with Syracuse University College of Law. She is a lifelong resident of Savannah and resides with her family, parents David and Lisa Secor, and sisters Lauren and Madison.