The Hobart College lacrosse team cut a three-goal deficit to one late in the Northeast Conference Championship game, but couldn’t find the equalizer before time ran out, falling to Robert Morris University 11-10 at Mount St. Mary’s Waldron Family Stadium this afternoon.

The Statesmen (11-5) led 6-3 late in the third quarter, but the Colonials (9-7), who extended their winning streak to eight games, ripped off five straight goals to take an 8-6 lead early in the fourth quarter. RMU had five different goal scorers during the run. Senior Chris Aslanian stopped the run, scoring off an assist from junior Eric Holden at the 11:20 mark. The Colonials answered with two more goals to push their advantage to 10-7. 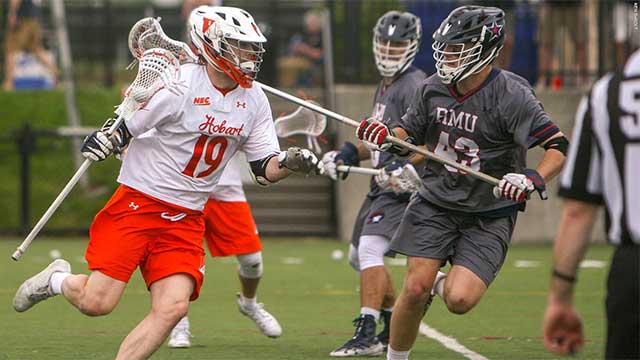 It remained a three-goal game as the clock ticked under six minutes, but junior Justin Scott scored back-to-back goals 38 seconds apart to make it a one-goal game. RMU’s Corson Kealey scored what proved to be the game-winner with 1:48 remaining, but the Statesmen needed just seven seconds to close the gap again. Senior Matthew Pedicine won the ensuing faceoff, charged into the box and fed Holden, who scored his team-leading 45th goal of the season. The goal tied Alex Love ’15 atop Hobart’s Division I single season list.

The Statesmen got off a pair of shots in the waning seconds but the last one was sent wide by a well-timed check from a Colonial defender. Robert Morris collected the loose ball and, with the help of an illegal body check penalty against Hobart, was able to run out the clock to repeat as NEC Champions.