BILLS DRAFT RECAP: Buffalo adds talent to both sides of the ball in successful 2019 draft

Buffalo General Manager Brandon Beane and Head Coach Sean McDermott attacked the overhaul of the Bills roster, first in free agency, and now in the draft. On Saturday, the Bills rounded our their 8-man draft class that started with Houston defensive end Ed Oliver’s selection as the 9th overall pick on Thursday night. 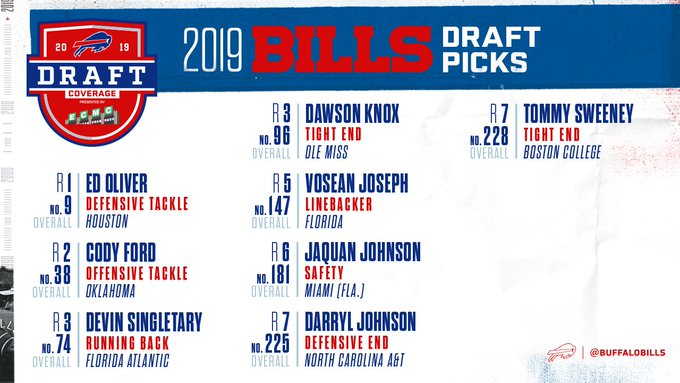 Dawson Knox will make the #Bills look smart for years to come (What they’re saying about Buffalo’s new TE)https://t.co/50M8UcuN8H

“He asked me where I wanted to play and I told him, I want to go to Buffalo.”

We’re pumped to have you, Cody. #BillsMafia pic.twitter.com/kLZ6ddIoLo

.@MattParrino and @RyanTalbotBills break down the @BuffaloBills‘ selection of running back Devin Singletary Friday night in the #NFLDraft. https://t.co/FdQvhss7hl #billsmafia pic.twitter.com/bu9jxC7Y4F

Why Cody Ford wanted to play for the #Bills @WKBW pic.twitter.com/v0pya0b1bZ

We’ve received the 96th overall pick from the @Redskins for the 112th and 131st picks in the 2019 Draft. pic.twitter.com/1vxUKzUCTp

A+ grade for TE Dawson Knox

"This is what Josh Allen needed" – @AdamLefkoe

"I compare him to Greg Olson. I had a round 2 grade on Dawson Knox" – @NFLDraftScout

By my count, after the 2019 NFL Draft and the reported signing of UB QB Tyree Jackson as a UDFA, the #Bills have 9 roster spots remaining for priority UDFA players. They have a total of 82 players at the moment, but RB Christian Wade does not count towards the 90.

We were proud to have Darryl Talley and our friends in Rochester announce our picks today from the home of the Jeffersons, an #NFL100 original team! pic.twitter.com/oHjWYqwkNl

Great quote from Vosean Joseph on his conference call regarding playing special teams: “I love playing on kickoffs, because it’s like hitting people for free.” #Bills #NFLDraft

Welcome (back) to Buffalo, Tyree Jackson!

Only minutes after the 2019 #NFLDraft ended, the #Bills signed the #Bulls former QB as a UDFA. And it makes sense: https://t.co/dY5qDCg0Ue

Once again, and on paper, I'm impressed by the unflinching way in which McDermott and Beane have rebuilt the #Bills in two short years.

It's gone from a roster filled with over-priced, under-achieving talent, and an unmatched mix of players from past regimes …