Chief Deputy Stephen Sklenar was recognized for 45 years of service on April 1st.

He joined the Wayne County Sheriff’s Office on April 1st, 1974 as a deputy sheriff when recruited by incoming Sheriff Richard Kise.

Chief Deputy Sklenar was promoted to the rank of sergeant by Sheriff Paul D. Byork in 1981 and maintained the position of Shift Commander in the Sheriff’s Patrol Division until transferring to the Sheriff’s Civil Division as its commander in 2004, replacing retiring Lieutenant Ronald Fillmore.

In 2007 he was promoted to lieutenant by Sheriff Richard Pisciotti.

On May 23, 2017 Sheriff Barry Virts promoted Chief Deputy Sklenar to the rank of Chief Deputy as the third ranking command member of the Wayne County Sheriff’s Office overseeing the Police Services Division, Civil and Records Offices.

Graduating as Valedictorian of his Police Academy Class, he has been active with the Finger Lakes Law Enforcement Academy since 1978, teaching firearms and accident investigations. 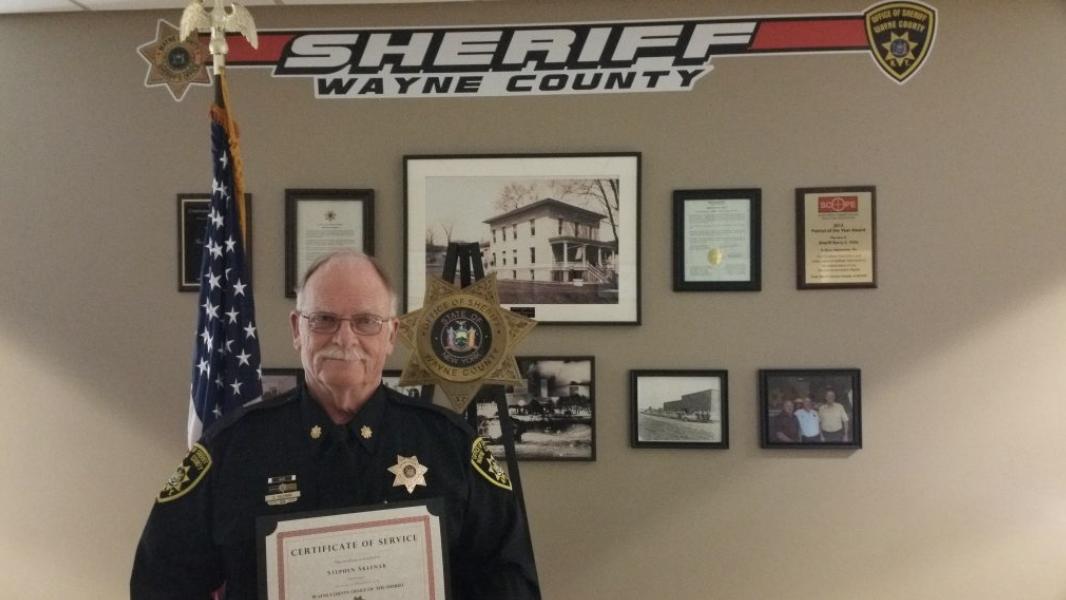 He is an active Instructor and Instructor Evaluator in both general and special topics. Chief Deputy Sklenar has been an instructor for nearly every law enforcement officer currently employed in the Finger Lakes Law Enforcement Association Training Region (Cayuga, Ontario, Yates, Seneca, Livingston and Wayne Counties).

He coordinated this agency’s transition from revolvers to semi auto pistols in 1990. He was an original member of the Sheriff’s Underwater Search and Recovery Team for 24 years working his way up to Dive Team Leader.  With the blessing of Sheriff Pisciotti, he assembled and founded the Sheriff’s Emergency Response Team and served as an operator, sniper and has been the Emergency Response Team Commander since 1988.

Sklenar is also an active member of the Sheriff’s Crash Reconstruction Team and currently serves as its commander.  He has been a guest instructor at the Mohawk Valley Police Academy assisting in reconstruction classes and holds a current certificate of accreditation through the Accreditation Commission for Accident Reconstruction, an international organization to promote excellence.
He has instructed classes for Wayne County on county related topics such as Work Place Violence and Active Shooter. In off duty departmental related activities he is an active member of the Wayne County Historical Society, lecturing on Sheriff related topics for the Society and co-authoring a book for the Society titled “A Jail Among Us” with the Society’s Director Larry Ann Evans.

Sklenar has exhibited continued dedication and commitment to the Wayne County Office of Sheriff in all aspects of his assignments and responsibilities, many times above and beyond what is required,” said Sheriff Barry Virts. “Chief Deputy Sklenar has changed with the times and in most cases self-trained himself with the ever changing technologies presented to the law enforcement profession to lead the Wayne County Office of Sheriff in these new evolutions of change and progression.”

“It is with great pleasure that I recognize Chief Deputy Stephen Sklenar on his 45th anniversary of service to the Sheriff’s Office for his outstanding achievements to the Wayne County Sheriff’s Office, Wayne County government, our communities of Wayne County and the Finger Lakes Law Enforcement Academy training area,” Virts concluded.