A local duo is taking a new approach to odor collection for those who are smelling two of the largest landfilling operations in the Finger Lakes.

Complaints about the Ontario County Landfill and Seneca Meadows Landfill have been seen wide- and far on social media.

Jackie Augustine and Jeff Henderson, the local duo behind the Seneca7 running relay, are convinced that knowledge is power and knowledge comes from good data.

Combining their backgrounds in public policy and software engineering they are launching an online service meant to better capture the frequency and range of landfill odors. Currently, supervisors in both counties receive reports from the landfill management firms about odor complaints received on phone lines that the companies manage themselves.

Augustine believes this is a problematic procedure. “Not only do I see that set-up as a problem,” she explained. “But I think the system itself discourages people from registering their complaint.”

She was reminded of her time on Geneva’s City Council when residents near Hobart and William Smith Colleges would decline to file formal noise or vandalism complaints due to a lack of follow-up on other complaints. “It’s bad enough if an issue doesn’t get resolved; it’s even worse if you aren’t confident the issue was even recorded. Who’s monitoring the paper trail?” Augustine added.

That’s where ItStinks.org enters the frame.

Augustine said that a few days before the launch of ItStinks.org – she was letting the dog out – when she was met with an overpowering smell from the landfill in Ontario County. She called Casella’s complaint line but was put on a long hold. She tried to use the new online form that Casella put on the County’s website, but was disappointed that the form didn’t even collect basic information – like the location of the smell. 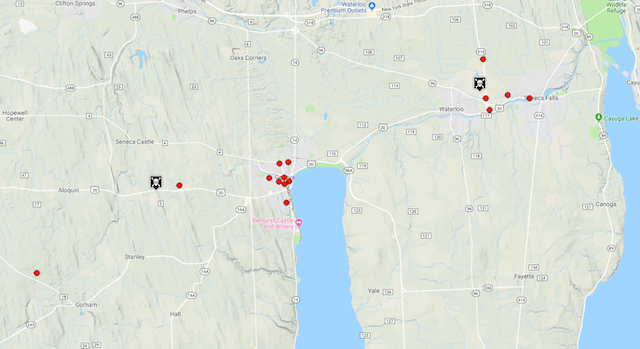 “I told Jeff there’s got to be a better way to not just collect the information but confirm that tit is received and taken seriously. Right now, it stinks, in every sense of the word,” Augustine recounted.

Henderson, who has developed event registration and real-time tracking software for commercial use, as well as database, invoicing, and email applications for community projects, set out to construct a system that would meet multiple objectives.

1 – Create an easy process for people who smell a landfill odor;
2 – Ensure the complaint would be logged appropriately so that the supervisors and DEC would have complete and accurate data; and
3 – Provide people with confirmation that their complaint was registered.

“Visualization is key,” explained Henderson. “If you can submit your complaint online and get immediate confirmation that it was received as you intended it, that’s going to improve your confidence in the system overall and generate a better dataset for elected officials to use in their decision-making.”

The new system allows anyone who detects a landfill odor to place a complaint, which automatically records the location and time of the incident. The complaint generates an email to elected officials in that jurisdiction, alerting them to the report. There is the ability for a person to add more details – such as contact information, or other comments – as part of the complaint.

“Democracy should be direct and responsive,” added Henderson. “A few clicks and you’ve had your say and made sure it was heard. It’s going to be hard for the powers that be to ignore this.”

The duo plan to make periodic reports to government entities to ensure that those complaints are heard.