In a word, it was amazing.

Ask about any of the 100 students from the Newark Central School District who participated in the high-energy, fast-paced two-day “Young Americans” performance workshop held here March 8th and 9th and they’ll tell you it was just that.

And, in a word, that’s the sentiment of Newark High School vocal music teacher Kate Flock who organized the event again this year as in October 2017.

“It was amazing! All the kids had a great time meeting, singing, dancing and performing with people from all over the U.S and a couple of other countries.”

This latest workshop marks the eighth time during the last 23 years that the famed national and international touring group has held a performance workshop at NHS, but all but this one have been three-day events. 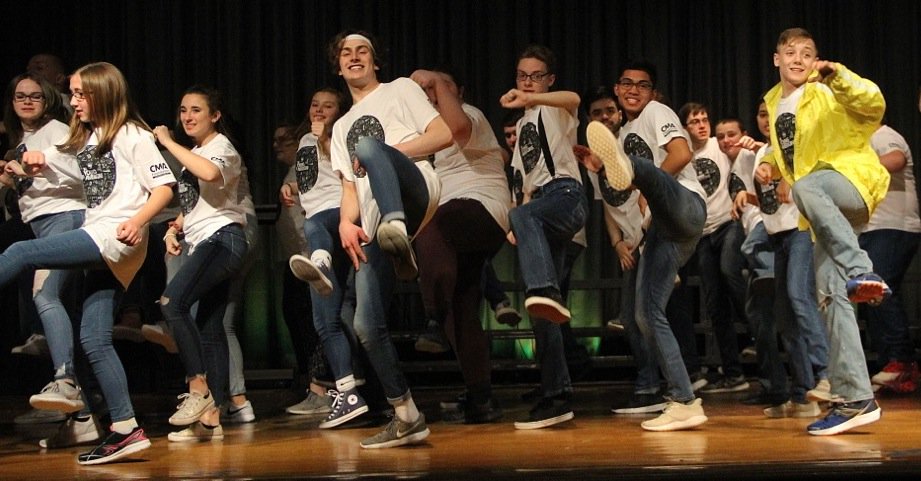 Offered in 2019 by YA, it was an abbreviated version with only about half of the cast or 25 Young Americans. Flock said the YA director who offered Newark the opportunity to hold a workshop again this year said holding another one within two years, instead of three, keeps momentum going and boosts interest in participating.

Since the workshop was scaled back, it was only open mainly to Newark students in grades 6-12 and only to those involved in vocal or instrumental music programs.

Young Americans Performing Arts Workshops employ an incredible combination of energy, teamwork, and confidence, using music as the tool and include everything from vocal and dance training to full stage performance.

The college-aged cast of trained performers/teachers provide a safe and exciting atmosphere for students in which to learn, create, and grow!

Founded in 1962, “The Young Americans” organization is dedicated to the promotion of understanding and goodwill among people throughout the world through music, dance, performance, academic education, and cultural interaction among student members and their audiences.

Student members are accepted into the organization based upon their talent and their interest in helping other students throughout America and the world attain self-confidence, self-esteem, and respect for others through music, dance, and performance.

Several NHS and other Wayne County high school graduates have become members of “The Young Americans” as a result of the workshops held in Newark.

The recent workshop culminated with an outstanding two-hour evening show.

“The fact that they can pull together the one-hour student portion of the show in less than two days time is also amazing,” Flock said.

Once the YA performers met and began working with students at 4 p.m., March 8th, they followed a rigorous schedule of workshops and rehearsals until the performance March 9th.

“This was my fifth time in “Young Americans,” said NHS senior Natalie Acquista. “I loved watching people who wouldn’t normally come out of their shell open up and become comfortable because of these (YA) role models.”

“My experience with the Young Americans was fun as always,” said NHS sophomore Jaston Brooks, who just participated in his third workshop with the “Young Americans.” “Everyone is so energetic and in the moment.  We all thrive throughout the workshop.  I was able to perform and create with people who love doing the same thing I do and make great memories with them”

Sophomore Ryan Hermenet said: “This was the third time I participated in the
“Young Americans” workshop. It was inspiring to see them all energetic and passionate about what they are doing.”

While it’s a lot of work to set up the performance tour locally, Flock said it is worth the effort.

“Any chance for our students to perform, we want to encourage,’’ she said.

Flock thanked parents and community members who generously opened their homes to the YA performers, providing not only lodging, but also breakfast and packed lunches for them.

She also thanked Emily, Dave and Julie Howard for providing evening meals at NHS for the YA cast March 8th and 9th.

To learn more about “The Young Americans” check out their website at www.youngamericans.org