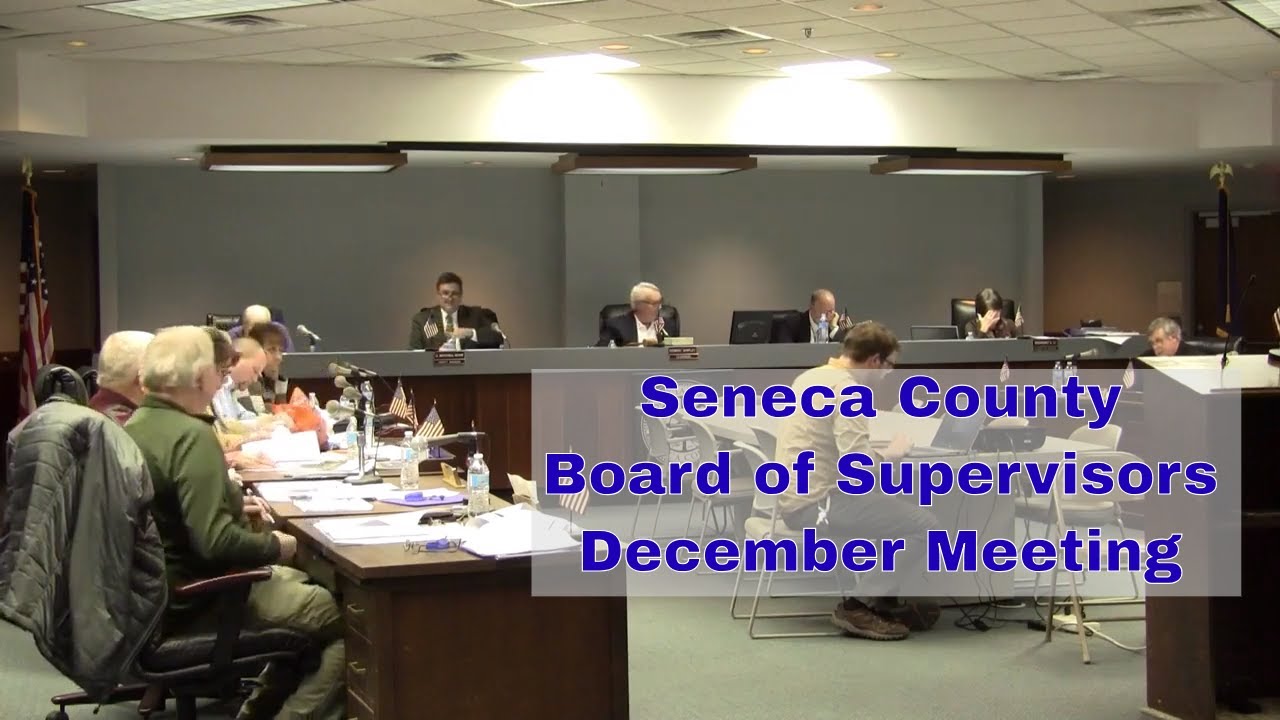 FL1 TV: Watch the entire meeting video at the bottom of this story.

It was the last regular session of the calendar year; and it’s been an active one for the Seneca County Board of Supervisors.

While the supervisors will have a couple special sessions before the end of the year to take care of some clerical items – the lion share of legislating has concluded.

Board Chairman Bob Shipley (R-Waterloo) said it had been a positive year, despite some challenges – like turnover in the county manager’s office, and a natural disaster that left the small community of Lodi reeling.

“We have to thank all Seneca County Employees, Supervisory Staff and Department Heads and we commend you for a job ‘truly well done’ this year,” he said. “We appreciate your hard work and your patience during a very difficult 2018, especially during the August flash floods and following weeks of clean-up in Southern Seneca County.”

The Chairman added, “Our employees are our most valuable resource, here in Seneca County.”

Shipley noted that during the board’s annual session at The Three Bears Complex located in Ovid that a renewed focus on ‘team’ and ‘Seneca County’ be brought to the forefront of legislative efforts. “I asked all Supervisors to join in serving causes greater than ourselves, to move Seneca County forward together as one unified group,” he added. “Together with County Manager Mitch Rowe – our goal was to find common ground on the issues that have previously caused division and to work together to resolve those issues for the betterment of all Seneca County Citizens.”

On Tuesday, Shipley asked that the board continue focusing on those efforts as they enter into 2019.

It’s an election year for all of the supervisors except for two. “I ask the board to focus our 2019 efforts on our County Water and Sewer districts,” he continued. “This Board has struggled for too many years to define the problems, restructure the governance of these districts and address needed changes that will improve operations and reduce costs to all residents.”

His assessment isn’t incorrect. The board has struggled – even this year – to find common ground on how to proceed with important water and sewer issues that require legislative movement.

During his remarks at Tuesday’s session he asked those stakeholders, including the Public Works Committee to identify the best path forward for Seneca County in 2019. Part of that will include identifying the best legislative actions that can be taken by the board to create movement on those issues.

In an appearance on Inside the FLX last week, County Manager Rowe said he wasn’t certain that a broad authority was the best answer. However, it’s unclear if that will shape the way those stakeholders ultimately decide to move forward on Seneca County’s unique set of problems. Rowe said that with an authority – like the one described as a possible solution to ongoing water and sewer issues – accountability to taxpayers can sometimes be missed or lost. Rowe noted that it didn’t mean it would happen, but that it was simply something to think about as they move forward in the legislative process to determine a best course of action.

Watch video of the meeting in the video player below: